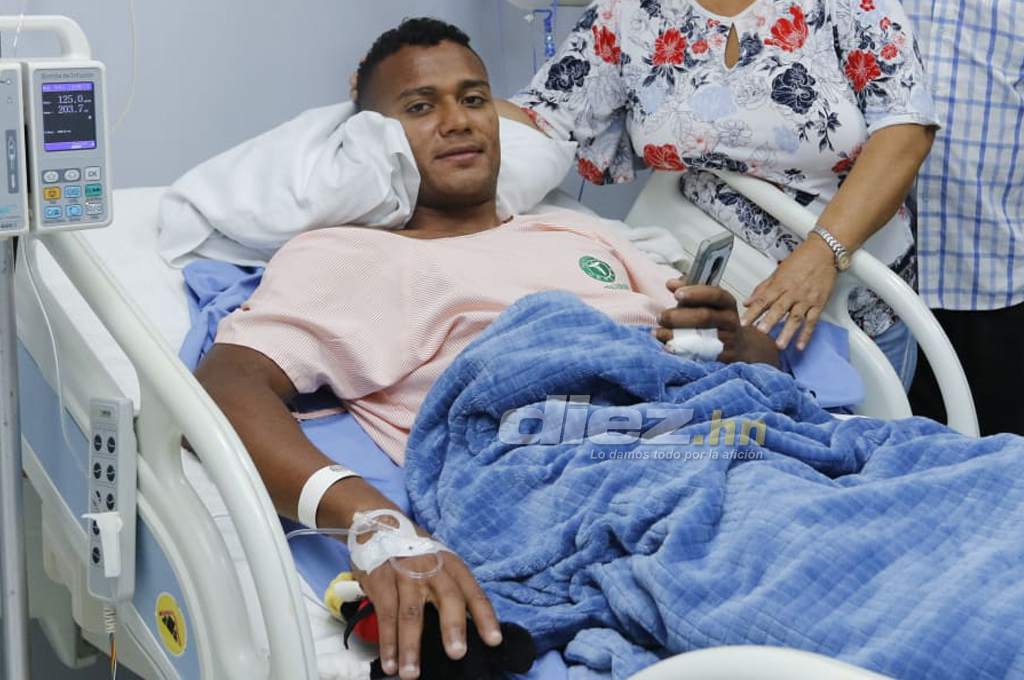 In a surgical intervention that lasted about five hours, Ever Alvarado can say mission accomplished and now he will begin “with more desire and strength” a recovery period that will last between six and nine months.

“Thank God we have already left the operation, happy because everything is fine and there is only recovery,” said the captain of Olympia and selected from Honduras just an hour after being operated on the left knee after a ruptured anterior cruciate ligament suffered Sunday in the classic against Marathon.

Alvarado is aware that from now on “the most important thing is coming” and “it depends a lot on me”, so he is “calm” and “we know that these things hurt, but in football and sports this is so .. I have the support of the family and I have to recover, “he said.

Clarifies that the injury “was alone, there they said that Denovan (Torres) touched me but no, when I hit it I felt that it was left to me, I wanted to react to grab the ball and felt that my knee thundered and I left a just … I already knew it was something serious, I wanted to try again, but when I took a throw-in I felt the knee and went to the ground, “he recalled.

The statements of the Olympian doctor, Raúl Pérez, considering that it was the poor conditions of the National engrammed that caused him to break the cruciate ligaments, Ever said that “from now on we know what the courts are like in Honduras, several players have passed us , are things of God … “.

Without leaving the subject, the 28-year-old footballer simply said that “I have played on worse courts, but it is the destiny that God wants and one has to face it in the best way.”

Who serves as the main leader of the lions within the field suffered a ruptured anterior cruciate ligament that will have it between six and nine months away from the football grounds.

Ever has had the support of his wife Myrka at all times. In the Cemesa hospital, where he was treated, he was also accompanied by his three children: Clarissa, Jimena and Matías.

“We were rotating with Emilio (Izaguirre), we played one and one, we were gaining confidence in the National Team and it hurts,” Ever Alvarado said of the Bicolor. He accepts that “I felt in my best sporting moment with Olimpia and the National Team, but we must not regret but lift my head.”

The five possible substitutes for Ever Alvarado in the Honduras National Team … And in Olimpia.

People who have been aware of his health make him “very happy and rest assured that there will be Ever for a while.” His coach at the Leon, Pedro Troglio, and the coach of the H, Fabian Coito, “both have written to me and sent their support, fans of Motagua, have even sent me messages,” he said.

As for his return to the activity of the SalvaVida League, he reiterates that “I will try to make it as soon as possible, I will not say how much (time) because I do not know, but I will try to take care of myself and do my therapies. I will try to be as little as possible outside the courts. “

This was the moment where the season ended for Ever Alvarado, who with luck and commitment would be available to return to the activity in approximately August.

At the merengue squad that will play this Thursday (9:00 PM) in Seattle against Sounders, he asks “to do it for me, to win that game; we know what that game means for the people of Olympia, to the teammates who die on the court as the teacher says (Troglio), make a positive result for Olympism. “

Before Seattle, Troglio says “nothing is impossible” and spoke of the substitute for Ever Alvarado.

His replacement for the remainder of the season, he thinks he will be as “as the teacher said”, between Axel Gómez, Elmer Güity and Elvin Casildo, who also had the option of playing there and we’ll see what decision he makes … Güity and Axel we know the conditions they have and they should seize the opportunity. “

He does not flinch before the challenge of returning to the courts with the same fortitude of seven years ago: “When I was younger I had not yet consolidated into a team, now I feel I have more experience and tranquility, that is important; if I got up one when I was younger, I will not get up from this, “he said.