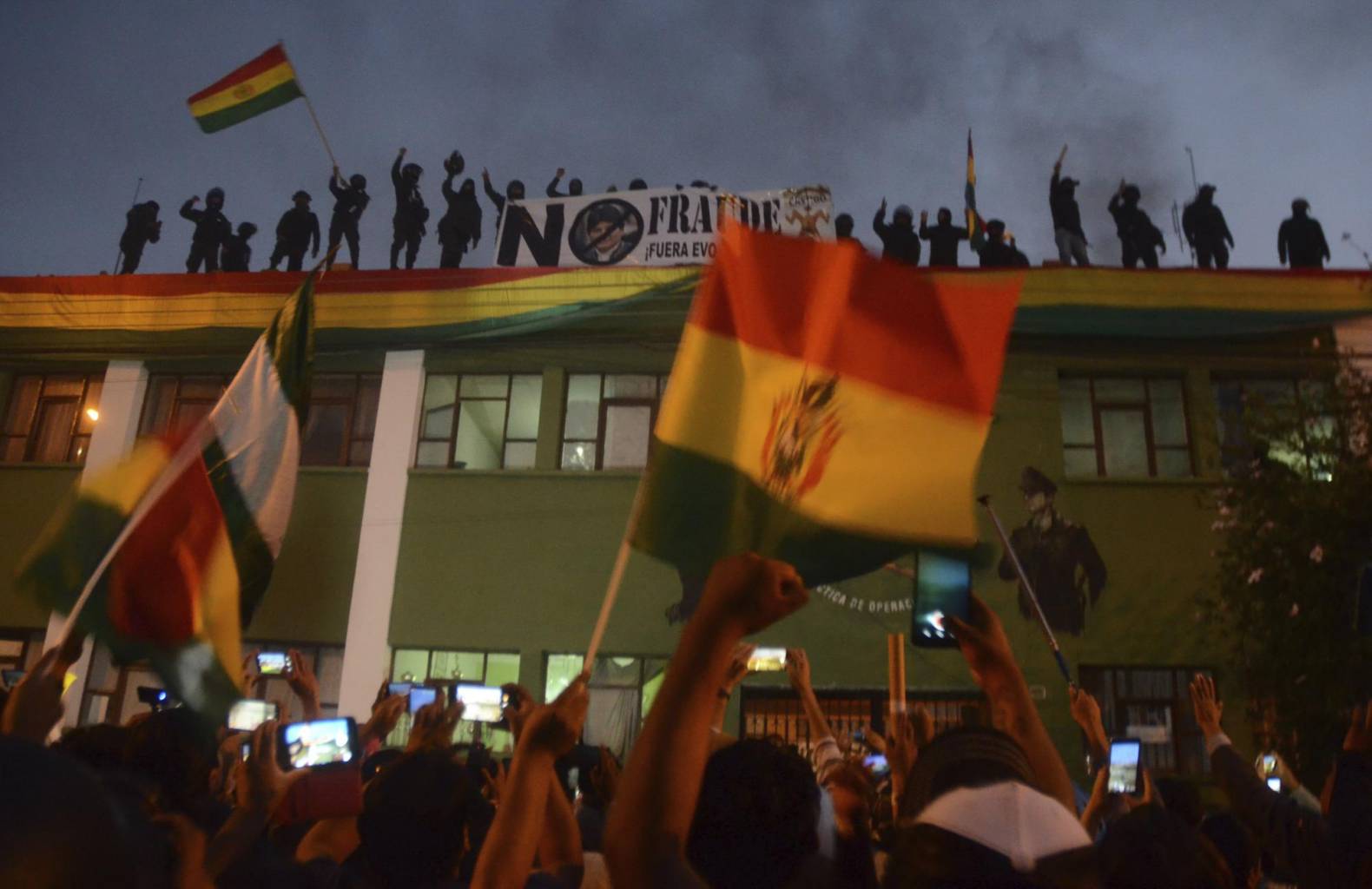 LA PAZ (AP) – The Evo Morales government denounced on Friday "an attempted coup d'etat" and accused opponents of plotting to overthrow it after a police riot in at least two regions, part of the agitation that shakes Bolivia later of the controversial presidential elections.

"The Government of Bolivia denounces to the international community that some political leaders are promoting a coup plan with the taking of the Government Palace," the Foreign Ministry said in a statement.

The civic leader Luis Fernando Camacho and former president Carlos Mesa, who was second in the October 20 elections, are accused of leading the conspiracy in the text of the Foreign Ministry's statement. The government urged "the international community to contribute to the preservation of the constitutional order in the country."

Neither Camacho nor Mesa went out to testify immediately.

Morales has been denouncing the alleged coup plan since conflicts erupted after the elections, in which he declared himself a winner despite accusations of possible fraud.

At night, the president summoned via Twitter to "peacefully take care of democracy and the Political Constitution of the State to preserve peace and life as supreme goods above any political interest."

“Our democracy is at risk from the coup d'etat that violent groups have launched that undermine the constitutional order. We denounce this attempt against the rule of law before the international community, ”he added.

For his part, Defense Minister Javier Zabaleta ruled out "at this time" a military intervention after a riot of police that extended Friday night. Protesters took to the streets in several cities to support the police rebellion.

“There will be no military operation at this time. It is ruled out, ”Zabaleta told reporters after an emergency meeting called by the president after a riot started by a group of police in the city of Cochabamba. The High Military Command participated in the meeting, which this week issued a statement stating that "the Armed Forces will ensure the maintenance of democracy and the unity of the Bolivian people."

The statement did not mention support for the Morales government.

Zabaleta acknowledged that "the police riot occurred in some departments (regions) … We are seeing what the discomfort is."

Meanwhile, hundreds of citizens and opponents crowded on Friday night in front of police headquarters in several cities of the country, in order to pressure the police to "follow the example" of a group of agents who earlier mutinied in the third week of social protests.

The television stations showed 18 policemen with helmets and balaclavas on the roof of the headquarters of the Tactical Unit of Police Operations. They waved flags and sang the national anthem before a large group of people who applauded them from an avenue in Cochabamba, in the center of the country.

More police in other cities retreated to their barracks without making statements, according to the television images. In the southern city of Sucre, noncommissioned officer Edgar Ticona told the media that they are awaiting instructions.

"Whatever is available at the national level, we will submit," he said before a concentration of people asking them to mutiny.

The police commander, General Yuri Calderón, said that there is no police riot and that the case of Cochabamba was "isolated" because there the agents called for the resignation of the commander, which was already released.

"There is normalcy in the rest of the country and we expect the services to be resumed," he said in press statements.

Minutes later, police from Santa Cruz, an opposition stronghold, placed a sign on the front of their barracks announcing that they were mutineers.

In recent days, grassroots police said that, since the outbreak of conflicts, they are quartered without sufficient conditions to fulfill their tasks.

Opponents have questioned the police for not acting preventively to avoid violent clashes between opponents and officials who have so far left three dead and more than one hundred injured, and have criticized that they intervene only in extreme cases.

In Cochabamba, opposition protesters burned the headquarters of the coca growers of Chapare, the bastion of Morales. The coca growers who support the president arrived Wednesday from their regions to that city to face the opponents.

Meanwhile, in La Paz, the civic leader Camacho increased his pressure on Morales, whom he asks to resign under the accusation of electoral fraud. The leader was cheered on Friday by hundreds of citizens and opposition activists, who supported his decision to deliver to the ruler a letter of resignation after the deaths of opponents in the protests.

Camacho has support from social organizations and opposition unions. The day before he was cheered by rebel coca growers to the president.

This lawyer and 43-year-old businessman, president of the influential Civic Committee of Santa Cruz, unknown until a few months ago, went on to lead the biggest protests against the president and is articulating more dissatisfied sectors. Opposition political leaders have been relegated to the background.

"We are not going to move (from La Paz) until the president himself receives us … The letter is everyone's feeling," Camacho demanded, and announced that on Monday he will carry the letter accompanied by great mobilization.

Until a week ago, Camacho was considered a minor league player, but he captured the country's attention when he challenged Morales's power on Saturday, demanded his resignation and gave him a 48-hour deadline. He arrived in La Paz on Monday to deliver the letter amid demonstrations of support and the rejection of the president's followers.

Earlier, Morales said he will not resign and accused opponents of conspiring to overthrow him.

"I will not give up," he said in a public act, and summoned all social movements that support him to "defend our process of change."

The country lives in social upheaval from the elections, with massive marches and street demonstrations against and in favor of the president, who still maintains significant support, especially in rural and indigenous neighborhoods.

After 14 years in the government, Morales came to the elections with diminished popularity and with the intention of opting for a fourth term. Corruption scandals, his eagerness to be reelected despite a referendum that denied him that possibility, and accusations of authoritarianism weakened his political capital despite his good economic management, which led the country towards growth with low inflation.

A commission of the Organization of American States conducts an electoral audit whose result will be known next week. Some mobilized groups bet that this report can calm the tension, but others are skeptical.