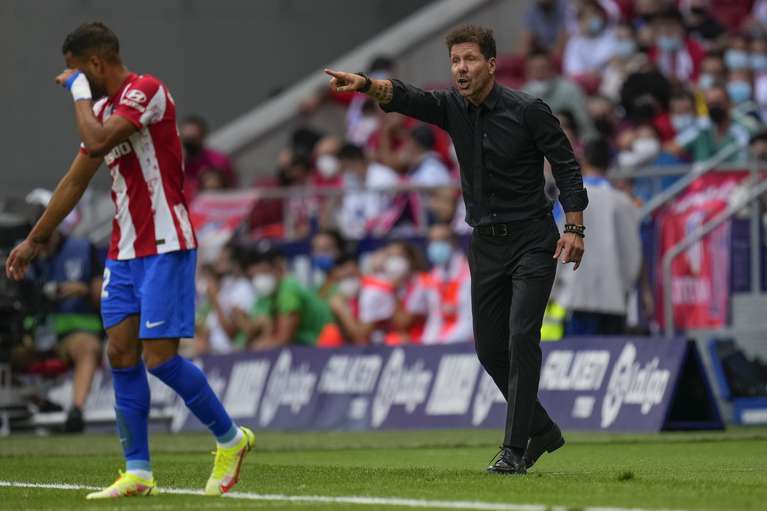 BARCELONA (AP) – Diego Simeone has risen to the elite of world soccer coaches with his talent for building rock-solid defenses, specializing in fighting and preserving the tiniest advantages despite lackluster performances from attackers.

Currently, the Atlético de Madrid forward presents an abundance of talent that has not been seen during the decade that the Argentine strategist has been in office. And paradoxically, the mattress team continues without achieving much in the rival goal.

Atleti were left with 10 men on the pitch and were limited to a second 0-0 draw at home on Saturday, after their attack was nullified by Athletic Bilbao in the Spanish La Liga.

In none of their six matches this season has Atlético de Madrid scored more than two goals. On Wednesday, they also settled for a 0-0 loss to visiting Porto at the start of the Champions League group stage.

And despite the fact that the French Antoine Griezmann joined the Uruguayan Luis Suárez, the Argentine Ángel Correa, the Belgian Yannick Carrasco, the Portuguese Joao Félix and the Brazilian Matheus Cunha, the Colchoneros forward does not produce.

“I would not look for excuses. It’s football and today can happen. I have no doubts and I fully trust my footballers ”, Simeone stressed. “We are going to work so that this number of good names do what they always did, which are goals.”

Midfielder Marcos Llorente had the clearest attempt for Atlético when his shot hit the post in the 75th minute.

Three minutes later, Atlético was left with one man less after Felix accumulated two yellow cards. The referee had first cautioned him for slapping a defender who was clinging to his shirt from behind. Felix, who was not looking at the player when his hand hit his face, received a second and quick warning after protesting vehemently.

The Basque Country club and the Madrid team remain undefeated after five rounds of La Liga.

Griezmann had his first title since returning to Atlético, on loan from Barcelona. But the only clear chance the Frenchman had was in the opening minutes of the match when his shot was too high and wide. He was substituted early in the second half.

Atleti took a one-point lead at the top. Real Madrid, Valencia and Real Sociedad could overtake him this Sunday.

Meanwhile, former Atlético star Radamel Falcao made a perfect debut for Rayo Vallecano, scoring within 10 minutes of entering substitution to complete a 3-0 win over Getafe in a derby between the two more modest clubs. from the Spanish capital.

The veteran forward entered the substitution in the 71st minute with Rayo leading 1-0. Midfielder Pathé Ciss increased the lead shortly before assisting Falcao with a pass for the Colombian to score with a cross shot from a corner of the small area.

Oscar Trejo had put Rayo in front with a penalty kick in the 9th minute.

Rayo Vallecano has two victories, one draw and two defeats in its return to the first division. Getafe is the last in the table after having lost the five games they have played this season.

Falcao, 35, signed with Rayo earlier this month as a free agent.

“I dreamed of jumping and scoring a goal,” said the Colombian. “My colleagues have given me a lot of support. I feel very comfortable, ”he added.

Falcao had two successful seasons with Atlético de Madrid from 2011 to 2013, when he helped him win the Europa League and the Copa del Rey. Subsequently, he went to Monaco, Manchester United, Chelsea and Galatasaray, where he played until the end of last season.

In other results, Argentine Javier Pastore, a former member of Paris Saint-Germain and Roma, made his debut for Elche, entering as a substitute in the 1-1 draw against Levante.

Osasuna continued with his good start and settled in sixth place. David García and Roberto Torres scored goals for Rojillo, who won 2-0 on the Alavés court, to leave him sunk in the bottom, without points.