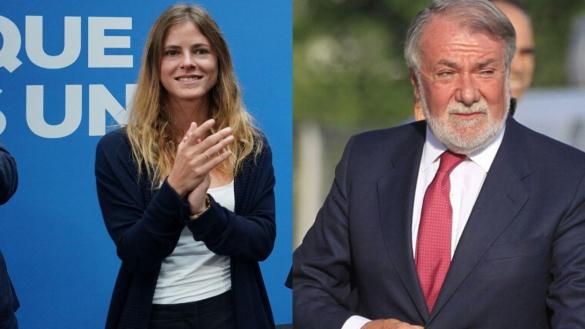 Jaime Mayor Oreja, former Minister of Interior of the Government of José María Aznar, already has an heiress. The deputy number 89 of the Popular Party, Beatriz Fanjul, who won the only seat of the formation for the Basque Country after snatching it from the PNV. Fanjul, like Mayor Oreja, is a subscriber to the theory advocated by a select group of people that ETA continues to exist and operate.

In an interview with El Español, the Basque deputy said that "I do not believe that ETA has disappeared", but "has been transformed." ETA was not just lead and blood. There was a social cultural economic framework that remains latent. We see him all the time with his euphemism of the right to decide, of self-determination, that it is no right, because the only right that we Spaniards have is to make our own decisions for ourselves as long as it does not affect the rest. In the Basque Country we have a lot to do and, therefore, snatching the seat from the PNV allows us to take a breath and give hope to those who feel Basque and Spanish and want a more open Basque Country. ”

These words are reminiscent of the position defended at great length by Mayor Oreja. On the occasion of the events that took place in the streets of Catalonia after the sentence of the procés, Mayor Oreja took advantage of the situation to return to the terrorist band.

During a conference at the Casino de Madrid held last October; Mayor Oreja came to assert that the procession Catalan secessionist is the result of the pact between José Luis Rodríguez Zapatero, ETA and Esquerra Republicana de Catalunya (ERC).

The former minister considered that there are three perfectly identifiable phases. The first “occurred at the end of the seventies with the coming to power of the PNV in the Basque Country and of CiU in Catalonia and the drafting of the Statutes of Basque and Catalan autonomy”; and the second “took place at the end of the 80s when the right to self-determination was recognized in the Basque and Catalan Parliaments”.

In the third phase is where the figure of Zapatero places: “The process did not start in Catalonia. It was with a pact between Rodríguez Zapatero and ETA, which was not written, whereby ETA stopped killing and Rodríguez Zapatero, as a counterpart, changed Spain in the territorial, social and moral sphere, ”he said.

“Then there were two other pacts, which were explicit. Estella's pact, by which the Basque nationalists, in exchange for the ETA truce, pledged to break up. And the Perpignan pact between ETA and ERC, for which ETA promised not to kill again in Catalonia in exchange for ERC becoming the relay of ETA in the rupture project, ”he said.

Up to that point comes Mayor Oreja, who insists that it is "a mistake to think that Spain has defeated ETA." “It has been negotiated, but it has not been defeated, because his is a project of rupture. ETA has left the vanguard, but it is not defeated. Its process is more alive than ever and now its protagonists are ETA and ERC, ”he said.

A subscriber to the theory

It is not the first or the second time that the former minister of Aznar insists on relating ETA, the proces and Zapatero. In fact, just a couple of weeks ago, on October 19, he compared the "crisis" that was plaguing Catalonia with "hatred of Spain", which in the Basque Country "resulted in ETA".

But it is that already in 2011, Mayor Oreja accused Zapatero of legitimizing the crimes of the terrorist band: “The Government has given ETA legitimacy and legality after their murders. We would already like Zapatero to use the same measuring stick he uses with Norway's terrible murderer, which must be condemned without a doubt; with another stick he is legitimizing 900 murders that have occurred over the years, ”he said in an interview at COPE.