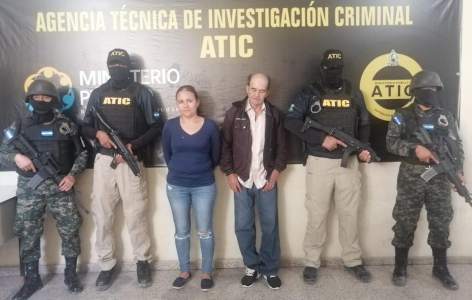 For the crimes of money laundering, illicit trafficking of persons and illicit association, a father and his daughter were sent to prison after being captured in raids in La Entrada, Copán.

Those arrested, according to the Public Ministry, are Juan José Navarrete and his daughter Denia Roxana Navarrete Brizuela, who are investigated bank accounts that do not match their income.

According to reports, the operation was directed by the Technical Agency for Criminal Investigation (Atic), whose authorities reported that both the father and his daughter were transporting people illegally to the United States.

For such illegal activity, they charged around eight thousand dollars per person, which were deposited in bank accounts.

READ: Administrator of the El Progreso prison is imprisoned

The Prosecutor's Office bases the accusation of illicit association and money laundering, because they allegedly have connections with criminal groups in Guatemala and Mexico, to where they took the victims after crossing the borders.

Police officers against human trafficking claim that the captured are members of a network that has connections in Honduras, Guatemala and Mexico.

Yesterday the defendants faced the defendant hearing in which the judge decreed the judicial detention and set for November 19, the presentation of evidence by the prosecution and defense.

For money laundering, prosecutors say they will prove to the judge that the father and his daughter have increased their capital without any legitimate justification. They will also present witnesses who have paid money for the transfer to other countries.