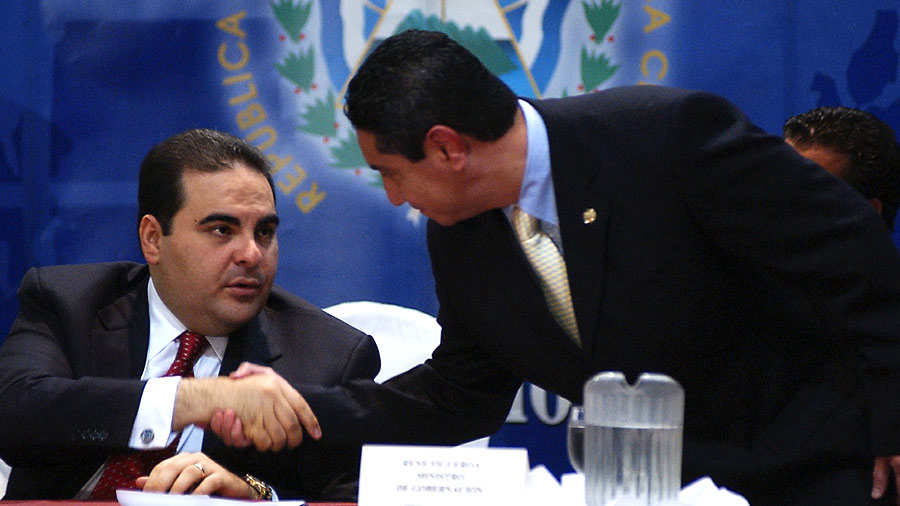 The amounts range from $ 2,800 to $ 300,000, according to CSJ Probity report. The detection of these deposits was made by Probidad when investigating the income of the former Minister of Security one year after the end of his administration.

The investigation to the patrimony of the former Minister of Security, René Figueroa, who carried out the Probity Section of the Supreme Court of Justice, showed that the former official and his wife recorded unjustified income during his administration and a year later for more than one million dollars . But he also had unjustified income after exercising his position from the accounts of Elías Antonio Saca.

“The general total of the money coming from the account in the name of Elías Antonio Saca González and deposited in favor of René Figueroa Figueroa is $ 517,800.00,” Probidad established.

According to the Probity report with addenda, which was accessed by El Diario de Hoy through the Access to Public Information Unit, Figueroa was established 16 irregularities after the period of functions and which, preliminary, added $ 2,385,798.86 in deposits and Bank withdrawals, and purchase of vehicles.

But after some allegations of the former minister, such as the one that according to the Court's criteria, in the inconsistencies detected to those investigated, only the deposits should not be added, not the withdrawals, so the withdrawals of the total amount of the irregularities should be deducted that were attributed to him. In the end, the amount questioned to him and his wife was $ 1,028,974.54.

For that amount, Figueroa and his spouse were sued civilly by the Prosecutor's Office last July.

However, in the investigation that Probidad does about the year after the charge (from May 2009 to May 2010) by disposition of the Court at that time, the investigation showed that Figueroa registered deposits for more than half a million with given money by Saca.

When Probidad finished the investigation on Figueroa, in November 2017, Saca was already imprisoned while the tax investigation against him for the crimes of peculation and money laundering was detrimental to the State.

The former governor is already convicted and purged 10 years after he confessed that he stole money from the State and washed it through different channels, among these family businesses.

In his report on the former minister, Probidad established that, although he and his family had an availability of $ 719,411 during the period under investigation (his administration as minister), both he and his wife “received, among other deposits, remittances that were recurring – carried out after May 31, 2010 – by Mr. José Rutilio García and Elías Antonio Saca González ”.

According to information required by Probidad to about twenty financial entities, the former minister himself made the remittances to his accounts on different dates, through checks or cash and in amounts ranging from $ 2,000 to $ 300,000.

On November 8, 2012, Figueroa made another important deposit of $ 150,000 to his account through a certified check and another from another bank for $ 434.37 but which, according to Probidad, is not reflected in the name of who signs it Saca.

Some remittances were made every month and others with less time difference. For example

In the inquiries of the bank accounts of Figueroa also appear several deposits of José Rutilio García in the amount of $ 44,000. But he also deposited cash or check to the former minister's wife for $ 74,974.

According to the Probidad report, which requested information from twenty financial institutions about the transactions of Figueroa and its family group, although the issuance of checks from other banks with which they remitted to the Figueroa account was verified, the banking entities did not send in some cases copies of the required checks.

When the Plenary Court sent Figueroa and his partner to civil court, he ordered the Prosecutor's Office to investigate the money the former minister received from Saca.

Last Thursday, the Attorney General's Office reported that he will accuse Figueroa of money laundering for more than $ 3 million and confirmed what Probidad said, that Saca gave him $ 510,000, "ignoring the nature of the transactions."

But at the same time, he says in his statement posted on Twitter that the company of former Minister Figueroa Radiodifusión de El Salvador received $ 1,974,942.31 from the Presidential House accounts.

Possibly present today the accusation against the former official.

Figueroa defense and the Court ruling

On Wednesday night, Figueroa went to the Prosecutor's Office with his lawyers and said he did it because he considers himself innocent.

Figueroa was one of the few people close to Saca who was not indicated of alleged corruption.

Although it is known that he has had business with Saca, in the process followed by Probidad, Figueroa did not verify the origin of the money he was questioned, nor did he give it to Saca, according to the investigation.

In fact, Probidad says that Figueroa failed to pronounce on the irregularities indicated after his period of functions and that he only provided an explanation to justify the total amount indicated in the preliminary report.

In that explanation, the former official tells Probidad that while he was minister his income was in concept of professional fees, profits of the company Radiodifusión de El Salvador S.A. of CV, canon of lease of property, savings interests and other income added the amount of $ 1,112,814.51 and that if that amount subtracts the deductions of law, payment of debts and even the amount that they questioned, the result still left him balance in your favor of $ 35,452.45.

Probity says that when analyzing the explanation sent by Figueroa, he did not verify with documents or sources that support his income, such as, for example, those he said he obtained by leasing a property in La Libertad.