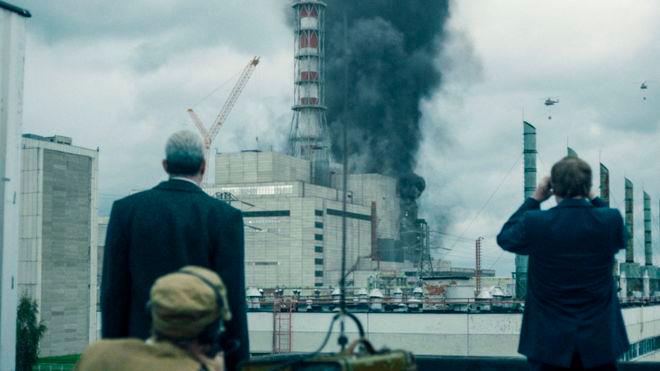 Five minutes. That is the time that can remain in the control room number 4 of Chernobyl, frozen in time since the dawn of April 26, 1986. It was here that a chain of human errors and design failures triggered the largest nuclear accident in the history.

It is difficult to escape the fear caused by the scene of the catastrophe, a feeling that grows as one gets rid of his belongings and covers himself with several layers of sterilized clothes, consults the two dosimeters that hang from the neck and travels kilometer corridors in semi-darkness until Get to the heart of the disaster.

The dim lighting of the room does not prevent seeing a gray dust everywhere. Part of that layer of dust is still highly radioactive and mixed with chemicals sprayed after the breakdown to mitigate its danger.

All that remains is incomplete panels, empty consoles and cables rushed in a hurry in the days that followed the explosion to minimize the effects of radiation. There is almost no trace of the hundreds of buttons that served to control the operation of the plant. The only sound heard is that of the steps themselves. There is no time to stop. Everything is rush and nerves.

Ukrainian authorities say the visit is safe. They insist that the "possible" dose of radiation exposure is a maximum of 0.1 millisieverts, a thousand times less than the amount considered harmful by the International Commission on Radiological Protection.

The entrance to minors and pregnant or lactating women is prohibited and the visitor must sign several forms and accept a dozen of strict security norms.

As soon as you start, you have to undergo a measurement of radiation throughout the body supervised by two nurses. A monitor hangs from the neck during the entire visit, to which a second dosimeter is added in the vicinity of reactor number 4.

"The measurements cover practically the entire body, including the face, hands, back and legs," explains Yulia Marusich, representative of the international department of the nuclear power plant. Five seconds later, the machine issues the verdict: not contaminated.

The clothing for the visit consists of two sets of pants, shirt, socks, gloves and a hat, which are complemented by a helmet and a mask against radioactive dust.

Yulia knows perfectly the labyrinthine corridors of the plant. He has been touring them for 22 years. The armored doors of access to the four sleeping reactors open before her thanks to a combination of keys, security keys and telephone calls in closed circuit.

Time and movements in each room are controlled to the millimeter. A false step may imply the interruption of the visit. Leaving the bag or the camera on the floor poses a risk of contamination that, in case of exceeding the established limits, would force a decontamination process and even in the destruction of the belongings.

Once control room number four is left behind, the tension does not decrease. Nor do security measures. The next stop is, neither more nor less, than reactor number 3, where the radiation levels in certain areas are even higher than in the fateful control room.

The corridors leading to it lack lighting and the rest of the way is done in the dark, lit only by the guide's mobile phone screen. "Please do not touch anything and try not to trip," he insists as we move under a circuit of rusty pipes.

It would be almost impossible to make the way back alone. Disorientation, darkness and numerous floodgates increase fear of the radiation ghost.

Meeting face to face with the heart of the intimidating reactor number 3. One can approach only a few centimeters and see the top of the hundreds of vertical columns made of graphite that were used to channel nuclear fuel.

“You are at the top of the reactor. Don't you think about taking a false step, ”warns Yulia. A few meters from the reactor, the guide warns that today gamma radiation can reach 500 millisieverts. Instinctively, one goes back.

The reactor 3 was launched for the last time in 2000. The room where the graphite sheet mosaic is located, with a height of a five-storey building, is still severely affected by radiation.

Of those who were on the front line after the accident, only about 1,500 remain alive, according to data from the National Chernobyl Museum in Kiev.

Alexander Logachev and Iliá Susnov are two of the more than 4,000 liquidators who worked the first few weeks to mitigate the effects of the accident.

About three o'clock in the morning on April 26, an hour and a half after the explosion, Alexander received an urgent call to go to the plant. At 27, this officer of the Kiev Civil Defense Regiment was the first person to draw up a map detailing the radiation levels in the facilities.

"For four days and with hardly any sleep we made the recognition of both the central and the neighboring city of Prípiat, the urban center most affected by radiation," he says.

“We worked incommunicado most of the time, almost blindly. The radio stops working from 1,000 roentgens, ”he explains.

The radioactive map was used by the authorities to justify the mass evacuation of the area, which took place two days after the first measurements.

At 25, Iliá Susnov volunteered and worked for two months to build a first retaining wall around the damaged reactor. “I wanted to see it with my own eyes. I was fascinated by the idea of ​​witnessing what had happened, ”he recalls. Every day he was there he received a radiation level ten times higher than allowed. Since then he receives a pension of 10 euros per month as compensation.

Currently, 2,800 workers work at the Chernobyl nuclear power plant. Many of them arrive every day by train from Slavutich, a dormitory city built in a hurry to house the evacuees and those involved in the liquidation work. They work in an environment of ionizing radiation that in some areas exceeds thousands of times the allowed doses.

They circulate from one end of the central to the other in white uniforms. Every Thursday they review the safety protocols and practice evacuation drills.

On the day of the explosion, the four operational RBMK reactors, or high-power condenser reactors, supplied 10% of the electrical energy of what is now known as Ukraine. The plant was intended to expand its capacity with up to eight more reactors and thus become the most powerful nuclear facility in Europe.

The reliability of such reactors for the Soviet authorities was beyond doubt. "It was thought that this type of reactor was so safe that it was impossible for it to explode," says Vladimir, a 55-year-old engineer working at the plant.

The explosion spread the equivalent of 500 atomic bombs like the one launched in Hiroshima in 1945, and the radiation continues to affect the inhabitants of the surrounding areas of Ukraine, Belarus and Russia.

The accident caused damages valued at 8,000 million Soviet rubles, about 18,000 million euros today, according to data from the administration of the plant.

There are no longer reactors operating in the plant. The thousands of workers who come to it daily are dedicated to its gradual dismantling, the storage of radioactive fuel and the maintenance of the facilities. Nuclear cleaning will be completed in 2065. Today, gamma radiation has decreased by half since the day of the accident.

The plant has not been producing energy since 2000, but continues to be part of the Ukrainian electrical system. From the control room number 1 the transmission of electrical power of the other four nuclear plants and 15 reactors of the country is managed.

Vladimir takes 12-hour shifts in the control room number 1. "Many do not know, but from Chernobyl we make sure that electricity reaches all parts of Ukraine, even the consumer," he says as he carefully observes the panels next to His two companions on duty. Everything is analog in the room, from the buttons to the control panels to the meters and parameters that measure the pulse to the control panel.

A new containment sarcophagus, a physical barrier as large as four football stadiums, has reduced 10 times the gamma radiation around the center. It is designed to last 100 years and has cost 1.5 billion euros.

“What happened in this place surpasses fiction,” says Ana Korolevska, a historian who has been at the forefront of the Museum dedicated to catastrophe for 28 years, who recalls that for a long time there was talk of “the heroes of the Chernobyl fire” for avoid calling it "nuclear accident."

The museum exhibits about 9,000 objects of the more than 100,000 that accumulates in its funds. "It shows aspects of the tragedy silenced by the KGB for years," said the head.

The Ukrainian government wants to reverse the negative image of the nuclear power plant, and one of the ways to achieve this is tourism. It is driving trips to the area and aims to create a kind of "green corridor."

Actually the place has never stopped attracting curious people. 13 years ago the appearance of S.T.A.L.K.E.R, a video game set in the Exclusion Zone that recreates the consequences of a second nuclear explosion caused by a group of Soviet scientists, gave tourism a first boost.

During the last five years, the number of tourists has multiplied by 12. And the “Chernobyl” series, produced by HBO, has renewed interest in the catastrophe.

More than 100,000 tourists have visited the place this year in 2019, according to the Ukrainian state agency for the Management of the Exclusion Zone, an area that covers about 30 kilometers around the center. Half are foreigners.

“This is a unique type of tourism and we assume high risks. As a business, we have to deal with strict security controls, numerous rules and permits, ”warns Konstantin Vlasov, director of Chernobyl Exclusive Tours, one of the twelve accredited tourist agencies operating in the exclusion zone.

Together with the visits that can now be made to control room number 4, the Chernobyl plant is already preparing new routes by boat and by helicopter. For now, five water routes and three air routes have been approved in the exclusion zone that will begin operating this year.

Mona, a 22-year-old Slovak student fails to overcome the visit. “I feel very strong emotions here, I can't help it. I think everyone should see this place, ”he says.

"Crying and nervous laughter are common reactions," says Yulia. "People lost everything here: their health, their children, their life."