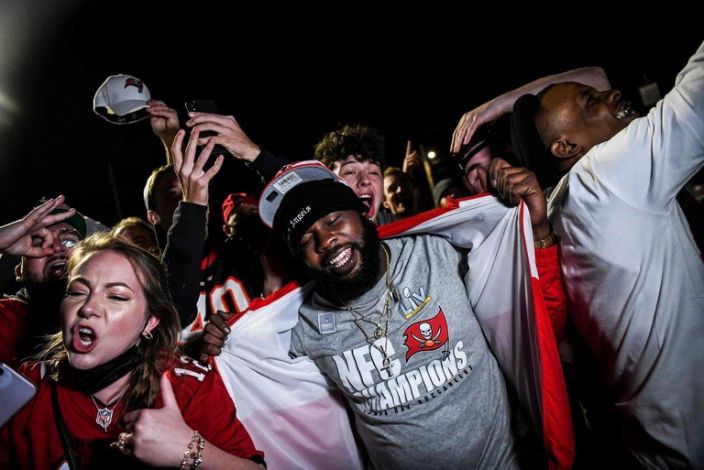 TAMPA- Many Tampa residents participated in massive celebrations for their team’s victory in the Super Bowl, crowded together and without a mask, despite the sanitary regulations imposed by the authorities to stop the spread of the coronavirus.

“It’s very frustrating because we’ve worked so hard on the issue,” Tampa Mayor Jane Castor said at a news conference Monday. “At this point in the fight against COVID-19, there is a certain level of frustration when you see that kind of thing.”

Some 200,000 masks were handed out before the game and “a majority” of the attendees and businesses attacked the rules, the mayor said.

Among the measures was a cap of 25,000 people at Raymond James Stadium, which usually seats 66,000, and the obligation to wear a mask.

But outside the stadium, where the Tampa Bay Buccaneers defeated the Kansas City Chiefs, you could see crowds of people together and without masks, screaming, hugging and filling the streets and bars.

Hoping to prevent the Super Bowl from becoming a source of contagion, Castor signed an executive order mandating the wearing of masks even outdoors, and urged fans to celebrate the game’s outcome with a sense of responsibility.

In nearby St. Petersburg, Mayor Rick Kriseman complained about the no-mask party that rapper Curtis “50 Cent” Jackson threw in a hangar at Albert Whitted Airport on Friday night. Photos posted on social media showed people at the party, agglutinated and without masks.

This isn’t how we should be celebrating the Super Bowl. It’s not safe or smart. It’s stupid. We’re going to take a very close look at this, and it may end up costing someone a lot more than 50 cent. @TMZhttps://t.co/Vrvg8fTdBB

“This is not the way we should have celebrated the Super Bowl,” the mayor tweeted on Saturday. “This is not hygienic or smart, it is stupid.” We are going to thoroughly investigate what happened and it could cost some people dearly ”.

America’s top infectious disease expert, Dr. Anthony Fauci, advised fans to watch the tournament from home, so as not to infect others.