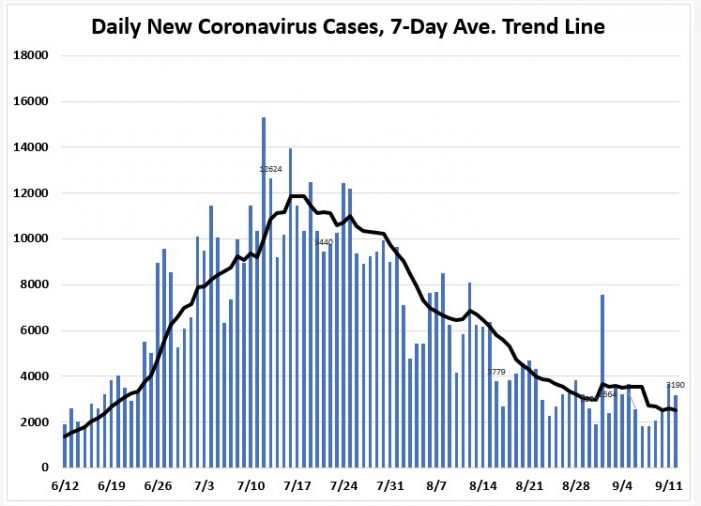 Miami, Florida – Florida reported 3,190 new cases of COVID-19 this Saturday, a slight decrease compared to the previous day, as has happened with the death toll, which added 108, while the state advances in its economic reopening in phases in the middle of protests by workers in the leisure sector.

According to data from the state Department of Health, there were 460 infections and 66 fewer deaths today than on Friday, when the governor, Ron DeSantis, announced that Miami-Dade and Broward counties, the two most affected, may pass from the Monday to the second phase of reopening.

During Phase 2, state authorities allow the capacity of people to increase in stores, restaurants and gyms, in addition to the reopening of amusement parks such as Disney’s tourist parks, located in Orlando (downtown).

Shortly before this announcement, the mayor of Miami-Dade, Carlos Giménez, advanced that he can also reopen the Miami Zoo, one of the largest in the country and the only subtropical in continental land.

The total sum of cases in Florida since March 1, which began the reports of cases and deaths from the pandemic, today amounts to 661,571 and 12,756 deaths, respectively, counting the deaths of non-residents in the state.

The daily positivity rate reported by the state entity also fell, to 4.42%, from 72,939 tests performed.

That rate corresponds to Friday, while last Thursday’s was 5.51%.

DeSantis assured yesterday at a press conference in Miami that not only the number of infections of the SARS-CoV-2 coronavirus has dropped throughout the state, but also the number of people hospitalized.

In the same way, Giménez spoke about his county, considered the epicenter of the pandemic.

While most of Florida’s 67 counties allow bars and nightclubs to reopen, Gimenez said Miami-Dade’s won’t just yet.

“My Administration is analyzing which businesses we can reopen that were forced to close in June due to the increase (in cases) after Memorial Day,” said Giménez.

These include cinemas, bowling alleys, theaters and arcades.

The authorities of Broward, the neighboring county that accumulates 74,273 infections and 1,279 deaths since March, have raised the same thing.

The decision sparked a protest last night by waiters, bartenders, porters, artists and entertainment promoters in Hollywood, a city close to Miami, according to local media reports.