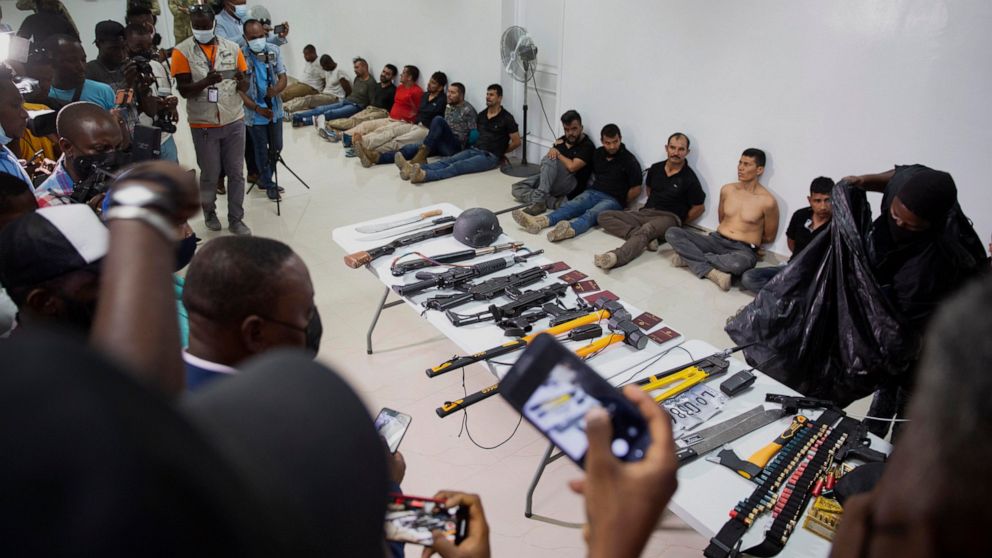 These are some of the alleged acts of torture that 18 former Colombian military detainees in Haiti claim to have been subjected by the Haitian police after being detained for their alleged participation in the assassination of President Jovenel Moïse on July 7.

The 18 former members of the military described the alleged torture in a letter sent to the authorities of their country and accessed by the Associated Press through one of the relatives, who requested that his identity be reserved for security reasons. He did not give details of how they received the handwritten letter.

The Foreign Ministry, the Colombian Presidency and the Haitian National Police did not immediately respond to the AP’s request for information.

“The 18 Colombians detained in Haiti are addressing you to denounce the very serious systematic violations of our human rights by the Haitian State, specifically by members of the National Police and the Judicial Police,” the handwritten letter reads.

After the assault on the presidential residence in which Martine Moïse, the president’s wife, was also seriously injured, the Haitian authorities arrested more than 40 suspects, 18 are Colombians and some Haitian police, as well as the doctor Christian Emmanuel Sanon. They also reported that three Colombians were killed during operations after the murder.

In the letter, the detained Colombians assure that one of those killed, retired sergeant Duberney Capador Giraldo, was first wounded with a shrapnel from a grenade that was lodged in his hip and assisted by a nurse, however, they indicate that “later he was tortured and killed with a coup de grace by a member of the Haitian National Police ”.

The ex-military, currently detained in the Haitian National Penitentiary, indicate in the letter that they received ill-treatment during the capture despite the fact that they did not offer resistance and their subsequent detention in a cell of a police station. In some cases, they point out that the same police had “thrown them at the civilian population for lynching” before taking them to the police station.

According to the letter, the ex-military Manuel Antonio Grosso was captured “without weapons” and once in the police facilities he was “tortured, beaten countless times in the testicles, ribs and stomach. His testicles were burned with a spray and a lighter, he was thrown to the ground and hit in the face ”.

In addition, they indicate in the letter that at least five detainees were threatened with death by the Haitian police. It would be Jhon Jairo Suárez Alegría, Germán Alejandro Rivera García, Jheymer Alberto Carmona, Víctor Albeiro Pineda Carmona, Alejandro Giraldo Zapata.

“He was threatened with a slow and painful death, since according to the judicial police in Haiti there are no human rights,” the letter on the Pineda Carmona case indicated.

The UN Integrated Office in Haiti pointed out in a report published in June this year that in the prisons of that country most of the inmates are confined in “inhuman conditions” and have not yet been sentenced. Several other reports from the United Nations have warned of torture and ill-treatment in prisons.

The complaint indicates that the injured detainees were not properly treated by doctors. In the case of Jhon Jairo Ramírez Gómez, they assure that “his right foot was burned with hot oil, generating a third degree burn” and later, in the absence of a medical examination, his foot “became seriously infected.”

The lack of timely medical care was also denounced by the Colombian Ombudsman’s Office, a state entity in charge of ensuring human rights, after a visit to the prisons on July 26. In this report they warned that three of the detainees had “considerable injuries that, due to their appearance, should be treated in a specialized medical establishment.” The entity also noted that the detainees were handcuffed for 24 hours and did not receive enough food and water.

Both the Office of the Ombudsman and the Foreign Ministry and the relatives have warned that the detainees do not have any kind of legal assistance to exercise their defense in Haiti, despite the fact that they have already been transferred to jail.

The court clerks investigating the case have received death threats as pressure to change certain names and statements in their reports, thus they have gone into hiding. Additionally, a Haitian judge assigned to oversee the investigation resigned last month due to personal reasons. This occurred after one of his assistants died in unclear circumstances. A new judge was appointed, but the former Colombian military have yet to appear in court.

One of the main suspects is still a fugitive from justice: Joseph Félix Badio, a former official of the Haitian Ministry of Justice, who has been identified by the Colombian police as the one who had ordered the assassination of Moïse.

In audio statements made known by Noticias Caracol, a Colombian media outlet, and released on August 18, four detained ex-military officers confessed that they were ordered to assassinate the president and also pointed to Badio.

“Mike (as they call Germán Rivera) did say that it was time to enter and kill everyone, it was time to kill all the policemen, rather, if there was even a pet, kill the pet, that there could be no witnesses … they did tell us , that it was an arrest warrant, yes, but Mike told us that it was necessary to peel (kill) the president ”, another person said in one of the audios, which according to Caracol is the ex-military Jheyner Carmona Flórez.

President Duque has told the press that most of the ex-military men were tricked into traveling to Haiti and carrying out a supposed protection mission, and only a small group was aware that they would carry out a criminal plan.

Colombian authorities have also pointed out that the highly trained Colombian ex-military personnel were hired by at least five security companies, one of them CTU Security, which is now under investigation.

In the letter, the ex-military assure that the statements given to the judicial police were “under torture and coercion, without a lawyer present.” In addition, they point out that they signed statements that would have already been ready before the interviews by the authorities, without knowing their content. Finally, they ask for a “humanitarian aid” and a commission to verify the complaints they make.