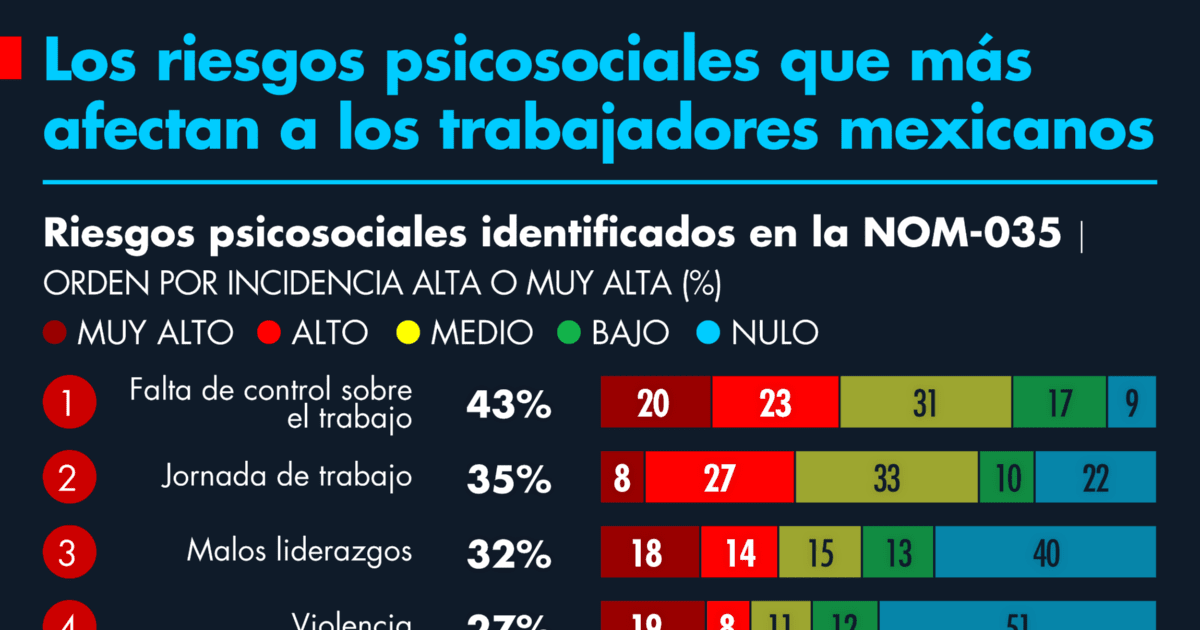 The pandemic has indirectly become the largest campaign on the mental health care of the workforce and the impact of work overload, long working hours, negative leadership and poor balance with personal life. In this context, NOM-035 on psychosocial risk factors in the workplace has gained greater relevance, but it still faces challenges to translate into real changes in companies, specialists agree.

The NOM-035 is a preventive regulation of disorders such as stress, anxiety, insomnia or depression caused by conditions at work. The standard aims for companies to mitigate these risks to mental health through a diagnosis and the application of correction policies.

Omar Estefan, director of Social Welfare of the Ministry of Labor (STPS), considered that after two years of validity, the norm has been well understood in terms of objective and scope. In this sense, the covid-19 allowed generating greater empathy between employers and collaborators and making visible the risks that may be present in the workplace.

However, the official acknowledged that there are still areas of opportunity for the implementation of NOM-035 linked to the correct interpretation of risks and their impact on people’s health.

“To the extent that a person has a good understanding of the concept of occupational hazards, their impact on health and how occupational hazard insurance works, it is much easier to understand what is the scope of the 035 standard, which is a standard of a preventive nature. The link between risk, work, damage and this circle of causality is something that has not been very clear among employers, “he said in an interview.

NOM-035 came into force in two stages: the first, in October 2019, was linked to the implementation of preventive actions; the second, in October 2020, to the task of companies to identify unfavorable conditions and implement an action plan. It contemplated provisions differentiated by company size.

Jorge Mérida, creative partner of the Advisory Network for Wellbeing, considered that the standard has been partially met. Although companies have made progress in identifying psychosocial risk factors, policies and corrective actions are a pending issue.

“Most companies have identified and measured psychosocial risk factors, but that is practically where progress has been made. This has to do with several reasons, the first is that there is no preparation for the implementation of the standard because there is a lack of risk management systems ”, said the specialist.

Martha Hernández, director of Human Capital Consulting at AON Mexico, agrees with this perception, the scope has been understood, but companies are not progressing at the same level of compliance, even some work centers were delayed due to the pandemic.

“We must not lose sight of the fact that, like all norms, there is a maturity process that includes the internal understanding of this norm, committee and policy in which companies continue to work with their collaborators to disseminate the policy on psychosocial risk factors”, the consultant explained.

However, having a diagnosis without a course of action is the equivalent of knowing the disease, but not having a treatment or health system to take care of it, Jorge Mérida stressed.

The role in the pandemic

The health crisis and its effects on the labor market accentuated the psychosocial risks to which a person may be exposed. Paradoxically, a rule designed for the prevention of conditions that can affect the mental health of employees fell short in the current context in the face of major disruptions such as teleworking, said Hosanna Rodríguez, president of the National Federation of Occupational Health (Fenastac ).

“The vast majority of companies may already have an important compliance in terms of results and even some already have interventions, but they have not focused very well. It was very short, “he said.

Despite this, Hosanna Rodríguez considered that NOM-035 helped mitigate the effects of the pandemic on the mental health of workers and will be a tool to transition to a new work culture that considers the integral well-being of people.

“Now we no longer only talk about psychosocial risks, we also talk about mental health and mental health and worker care programs. We have already completely changed the language and the approach to the well-being of the worker, where not only is it identified what is affecting them, there is also a proposal for intervention ”, he pointed out.

Omar Estefan agreed that the standard was not designed for a context such as the health crisis, but it functioned as a frame of reference for employers. In addition, the pandemic made it easier for employers to understand psychosocial risks.

However, the director of Social Welfare of the STPS ruled out that the agency plans special verifications for NOM 035 for now, although it is a standard contemplated in occupational health and safety inspections.

“Inspection is not an end in itself, inspection is a means to achieve decent working conditions in the workplace. Insofar as we understand it this way, we see that we are not looking to kick the door, of course it is audited and we will continue to do so as part of the occupational health and safety inspections, we do not have contemplated carrying out inspections of the standard 035 for this moment, ”he asserted.