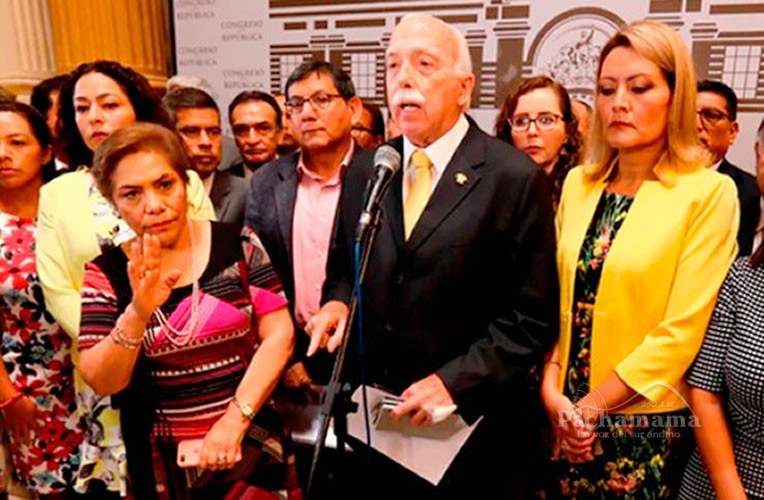 Fujimorism breeds the recovery of Parliament's dominance from next year. Given that the image of Fuerza Popular (FP) is discredited, its former congressmen participate in this electoral contest with other political organizations: Solidaridad Nacional (SN) and Vamos Perú (VP).

The decision of the National Jury of Elections (JNE), to allow the reelection of former members of the recent period, motivated the orange intern to evaluate to include more former congressmen – arrived at Keiko Fujimori – in the list of their applicants. "That is a possibility that is being handled," said FP legal representative Roy Ventura. This party can easily include invited applicants until November 18, the deadline to formalize the candidate lists.

The party of Fujimori Higuchi, as is known, bets on the hard wing of what was its parliamentary bench: Marco Miyashiro, Juan Carlos Gonzales, Mario Mantilla, Carlos Domínguez, Mártires Lizana and Miguel Elías. And, in addition, candidate for the ex-magistrate Carlos Mesía, who was a lawyer for Pedro Olaechea's cousin, Gonzalo Ortiz de Zevallos; the former candidate for mayor of Lima Diethell Columbus and the former president of the Editorial Fund of the Congress Ricardo Vásquez Kunze. All of them are headed by Martha Chavez.

If the plan is successful in the elections of January 26, FP will seek alliances with other banks as it did in the last legislature. That is why the ex-congressmen Rosa Bartra, Yeni Vilcatoma and Nelly Cuadros, the journalist Mario Bryce and the leader of La Resistencia, Juan José Muñico, alias “Jota Maelo”, apply with Solidaridad Nacional, a party founded by the ex-master Luis Castañeda.

The head of the Permanent Commission, Pedro Olaechea, also sought to approach SN, but declined to register because he was not allowed to lead the list.

By Vamos Peru, the former member of FP Luis Yika is listed as an official candidate. This organization was founded by former Callao Governor Luis Sotomayor, who was part of Chim Pum Callao de Félix Moreno.

For the political analyst and director of the Fides Group, Jeffrey Radzinsky, the rejection of citizenship to Fujimori has increased, however, "there are a number of figures that have a hard core of electoral support." “It is no accident that Bartra postulates with SN. They are characters that have their own flags and one of those is the ultraconservative, ”he said. Radzinsky believes that FP has lost strength and that caused his former congressmen to go to other groups. "And proof of this is that they have had to resort to Martha Chavez in the absence of figures," he added.

In addition, on the orange agenda for the new Legislative is to investigate President Martín Vizcarra for the congressional dissolution of September 30. That intention is reflected in the insistence of the congressmen of FP in the Permanent Commission to reopen the Subcommittee on Constitutional Accusations. They try to accuse the head of state and that this investigation prosper 2020 in an express way.

Appeal to the distribution figure
– For the lawyer on electoral issues José Tello, Fuerza Popular will manage to pass the electoral bill of 5% of votes nationwide and will be able to access the distribution of seats. However, he ruled out that the figure of 2016 is repeated, when the orange party won 73 seats in Congress. Tello clarified that this distribution was due to the way in which the constituencies in our country are composed. For example, Lima has access to 36 seats that allow all groups to have representation. But in regions the proportionality is not the same.