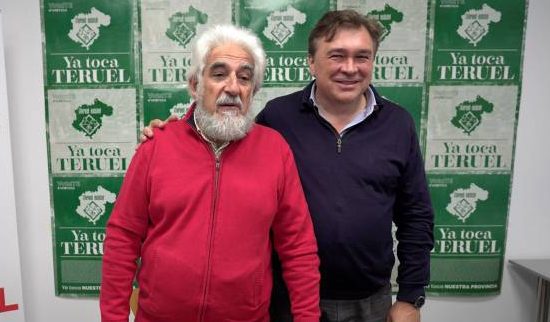 Manuel Moya, Almudena Pueyo and Sonia Sanz lived on Sunday the most surreal electoral night they remember. Angry at the success of the extreme right in the generals, these three young people from Madrid could not believe what they witnessed when they went for a drink on the eve of their performance at the Marín theater in the capital of Turolense, the reason for their visit to the city. While they counted each new Vox seat on the mobile, the entire bar celebrated that the Teruel Existing platform! He had entered the Congress. Sanz missed a small smile as he remembered his grandfather. “He was from here and it has always taken me four hours to get from Madrid. I hope that when I return next time it will no longer be like that, ”she confesses hopefully.

But the optimism of the foreigners contrasts with the skepticism of many Turolenses, exhausted after decades of broken promises. The deputy and the two senators who will represent the new formation do not escape this distrust. “All politicians are equal, with them what will always happen,” laments Hilario Marqués, 76, while smoking the cigar that accompanies the vermouth on a downtown terrace.

The hangover of the first electoral victory of ¡Teruel Existe! (26.8% of the votes, ahead of PP and PSOE) is more similar to any Monday than that of a city of celebration. Teruel has won a voice in Madrid, but does not want to die of success. While settling in a plastic chair, Tomás Guitarte, the 58-year-old architect who has topped the list, explains the suspicion with a very recurring example in the city: “We have been promised so many things that the Turolense is like a scalded cat: flees hot water (traditional parties) when it has burned, but also cold water (new formations). ”

A platform without ideological definition

The already elected deputy attends in the makeshift headquarters of the formation, a modest place rented to a gym on the outskirts where a blackboard with a motivating message written by his daughter stands out: “Courage, Teruel There!”. The campaign of the platform, which was born in 1999 as a citizen movement and decided to present itself for the first time to the elections last Sunday as a group of voters, has been possible thanks to more than 30 volunteers. Jesús Sangüesa, a 41-year-old computer programmer, decided to get involved last summer so that his daughters “have a future,” he confesses under a cold wind storm at the gates of the headquarters.

Unlike many other Turolenses, Sangüesa is optimistic: “Ours is an ambitious program, but they will listen to us. Not only to us, but to all the interior Spain ”. The platform is not defined ideologically, but includes among its claims the construction of pending infrastructure for decades – Teruel is the only provincial capital that does not connect with Madrid by highway – in addition to a State pact for territorial balance.

While it begins to sparkle, three executives rush to get to eat on time and comment on the election result with an eloquent phrase: “Okay, if only to go on TV.” After two decades of claims with little result, the media impact of the candidacy has placed the province on the map. Now, Guitarte hopes that the seat won can put its demands on the agenda, even at the cost of going to sleep at four in the morning and eating a hamburger in a hurry before serving journalists.

Fed up and ignorance

“When I accepted, I knew that this was a sacrifice,” confesses the elected deputy with a fortitude barely altered by the beating of the last 24 hours. However, other Turolenses begin to be fed up with so much attention in a town of only 35,000 inhabitants, and they already refer to Teruel Existe! as “the theme of fashion.”

Despite having swept the city with 42% of the votes, not everyone knows the grouping of voters. In a downtown bar, Mari Cruz, a Madrilenian who has lived in the city for two years, rushes a coffee while her friends, two Asturian civil guards who prefer not to give their names, have drinks. Yesterday they learned that Teruel existed in politics, but they would not hesitate to support Guitarte if they were registered in the city. “It’s the only way to make us heard,” they say.

Sangüesa agrees with them, who uses a metaphor inspired by the writer Julio Llamazares to compare Spain with a bell: the center rings, the periphery makes noise and between them there is silence. From now on, Teruel will ring in Congress so that the voice of empty Spain is heard, at least, during the next term.

The empty Spain celebrates the result

The Coordinator of the Empty Spain welcomed the arrival of Teruel Existe! to Congress The integrating platforms, more than 100 throughout 21 provinces of the interior of the country, see “very feasible” to achieve a state pact against depopulation after the emergence of the Turolense group in both houses. “It has set an incredible precedent. It’s a touch of attention to the big parties and governments, ”says Marta Hoyos, one of the spokespersons for the coordinator.

During the election campaign, Teruel exists! He received the support of Soria ¡Ya !, who yesterday joined the congratulations, and other platforms in numerous provinces. Guitarte says that, far from exercising a localist role, he will become the spokesman for all of Spain empty in Congress.