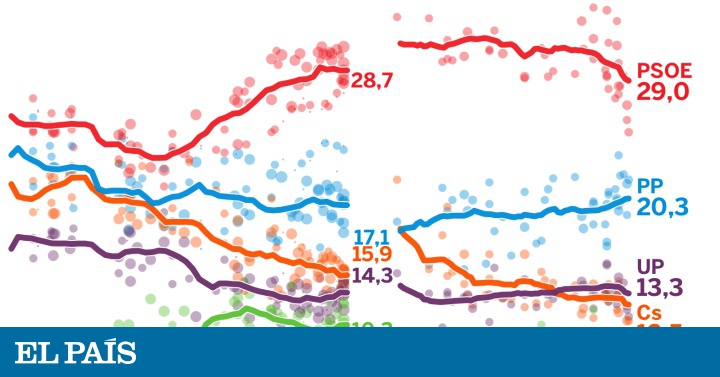 Every week, Kiko Llaneras writes about politics with data and an analytical look. Sign up to receive the newsletter in your email. Here you have this Wednesday.

📊Good morning! I go back to the polls because they are moved. There are two disturbances acting at the same time – the electoral repetition and the Errejón effect– and, although the second is more evident, we should not despise the first. Repeating elections can move polls.

The PP continues to rise. It is three points above its April result and its trend is positive. Especially in the last weeks.

2. The two unknowns around More Country

1. Where do More Country voters come from? According to the latest Sondaxe poll, 21% of Podemos voters and 10% of the PSOE would vote for More Country. They are figures similar to those of Sociometrics, which spoke of 23% and 10%, respectively, a few days ago.

2. In which provinces will they appear? This week it has been confirmed that Más País will concur in coalition with Equo, la Chunta and Compromís. That means that it will be presented in the three Valencian provinces and in Zaragoza, but it does not clarify much more.

On Sunday there are elections in Portugal, where the socialist António Costa (of the PS) seeks a majority to govern alone. Since 2015 he has done so in coalition with the Bloque de Esquerda (BE) and the Communists (CDU).

What the polls say The Socialists are around 38.5% of votes, the Bloco 10% and the Communists 7%. The second force is the PSD (25%). The conservatives of the CDS-PP (5%) and the environmentalists of the PAN (4%) would also obtain representation.

Will the socialists have a majority? It is not clear. They are close to the 116 seats that are necessary, but below. Yes it seems likely that the Socialists join the Bloco. As a reference, in 2011 and 2015 the most voted party was around 39% of votes and that was not worth it to reach a majority (it remained around 47% in seats).

Surveys in Portugal have been good in the past. Since 1991, polling averages for legislative votes in the country have made an average absolute error per match (MAE) of 1.3 points. That is less than in Spain (where the MAE is around 1.9 points) and in the United States (2 points). I have made the calculation with data from Jennings and Wlezien (Nature).

+ Since 1995, the most qualified jobs have grown. Last week I showed with OECD data that intermediate qualification employment had been reduced, but I forgot to point out another thing in the graph: those jobs have been displaced by high-skilled jobs.

+ Not only that: the highest paid, most satisfactory and most prestigious positions also grew. It is one of the conclusions of Daniel Oesch's research, which has analyzed the occupational change in Germany, the United Kingdom, Sweden and Spain between 1992 and 2015.

+ 2030 jobs? The consultant McKinsey expects that between 2017 and 2030 jobs in health, care, STEM / STIM and entertainment will grow. | McKinsey

In 1989 until the news told that a UFO had landed in Voronezh (Russia). With some caution, but totally serious. I remembered this Sunday with Íñigo Domínguez in the supplement Ideas.

If you like the newsletter, send it to friends or colleagues! Anyone can sign up here to receive it every Wednesday. It helps me to read it the more people the better. Remember, also, that you can send me comments or suggestions to the email: [email protected]