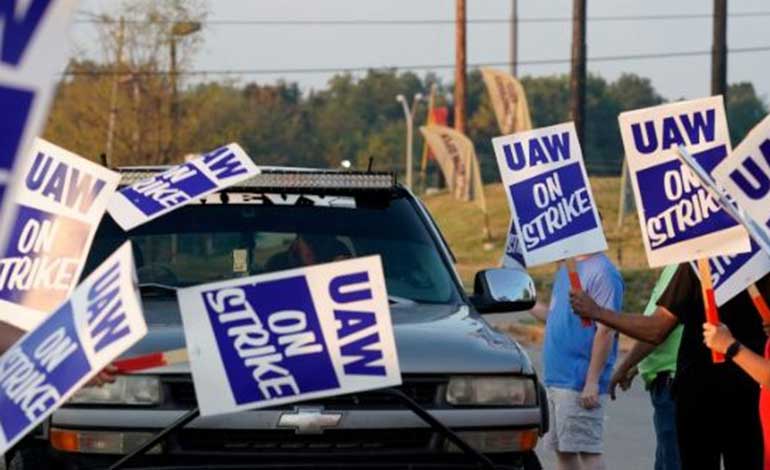 Washington, Oct. 13 (EFE). – About a month after the strike of the nearly 50,000 workers at the General Motors (GM) plant in the United States, losses accumulate for both the company and its employees.

Today, the United Auto Workers (UAW) and GM resumed negotiations for the signing of a new collective agreement after Friday the union submitted a counter proposal to the offer made by the car company.

The UAW also confirmed this Sunday that it will increase the weekly payments it makes to striking workers from 250 to 275 dollars and that they have not received their salaries for 28 days.

The president of the union, Gary Jones, announced the measure in a statement in which he states that "UAW members and their families are sacrificing" for the workers.

"This decision reflects the UAW's commitment and solidarity with all our affiliates and their families who have made the courageous decision to protect the way of life of our middle class," the union president added.

But payments of $ 275 a week are only a fraction of what a GM employee usually charges, so many are having to look for other jobs while the strike lasts or are being forced to sell their homes to survive.

The measure to increase the payments that UAW makes to its affiliates on strike on the one hand indicates to the company that the union is willing to maintain the stoppage of 33 production plants and 22 GM distribution centers in the United States.

But it also shows the impact on the strikers of the prolonged strike, the first one that GM has suffered since 2007.

The strike, the longest in GM in decades, began on September 16 after two months in which the UAW and the company negotiated unsuccessfully negotiated the signing of a new collective agreement.

The workers claim that, after years of sacrifices to refloat the company after the great crisis of 2008 and a decade of multi-million dollar benefits for GM, the company improves wage conditions and health benefits as well as stop transferring production to Mexico.

In its latest offer to the UAW, GM offers to invest $ 9 billion in the United States in the next few years, $ 2 billion more than initially announced, salary improvements and measures for temporary employees to become permanent workers.

However, the positions between GM and its workers seem further away than ever. On Friday, the UAW criticized GM for disclosing "half-truths" and blocking negotiations "to exhaust UAW-GM workers on pickets and protect millions of dollars in corporate bonuses."

Calculations made by J.P. Morgan points out that GM is losing more than $ 500 million for each week that its workers are on strike.

Not only striking workers in the US they are suffering the consequences, but several GM production plants in Mexico and Canada have had to cease their operations in recent weeks due to the lack of parts.

GM has had to send thousands of workers to their homes in both countries, which means that they do not collect their salaries either.

In total, some 75,000 non-GM workers would have been affected by the strike according to economists' calculations.