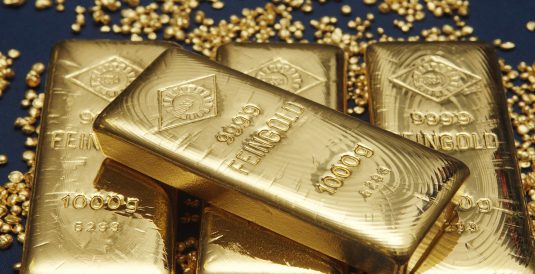 Before the strong commercial tension between the United States and China, the recent attacks on the oil center of Saudi Arabia and the winds of global economic slowdown, which are blowing more and more strongly, investors are seeking refuge in safe assets such as gold and some strong currencies, other than the dollar.

In fact, the tension that sowed uncertainty about world oil production and international turbulence pushed the price very close to $ 1,533, 224 above the $ 1,309.2 with which it began this year.

“The price of gold has changed faster than anticipated. Like the US bond markets, this has been aggressively quoted following the Federal Reserve interest rates (central bank of the United States), ”said Harry Tchilinguirian, economist at BNP Paribas, in a recent report.

(Read also: He was attracted to Ecuadorian kidnapped in Cali with ‘gold business’)

The expert argues that, while there is a low opportunity cost in maintaining gold and the uncertainty associated with the trade war between the United States and China continues, investors’ appetite for this asset has risen considerably.

Investors use the Japanese yen (as a refuge currency). The euro was thought to be a good refuge, but because of the crises it experienced, it never became what was expected

As long as the different uncertainties are not cleared, it will not be strange that the price of the metal remains high. Analysts predict that prices could be seen around $ 1,600 next year,

“While a moderate depreciation of the dollar is expected, according to our models, it should be taken into account that this is a factor that helps boost the rise in the price of gold. We have revised our gold price forecast as real rates move (and remain) in negative territory, and we project an average price of $ 1,400 per ounce in 2019 and 1,560 in 2020 ”, warns BNP Paribas expert.

Although these prices look encouraging, For a country that produces metal such as Colombia, this has no greater impact, since the exploratory activity does not move due to price dynamics, experts say.

(Further: Mining company would have washed $ 2.4 billion in business with gold)

The reason, says Juan Camilo Nariño, president of the Colombian Mining Association, is that the price today could vary greatly at the time that project enters the exploitation phase, which is also not safe until the necessary studies are completed.

And he adds that what could be attractive to encourage exploration are other types of incentives, such as expediting procedures, tax incentives (possible refund of VAT in the exploratory phase), as well as having legal certa inty.

The impact, as a producer, is not so significant either, since the country is not in the big leagues of that market.

Then, the positive impact for Colombia is on the export side, as more dollars are received for the same volume of gold exported, explains Camilo Pérez Álvarez, manager of Economic Research at the Banco de Bogotá.

But he warns that these exports do not seem to coincide entirely with production volumes. “But that’s another issue.”

Colombia’s gold exports in the first seven months of 2019 totaled 863.4 million dollars and its annual growth was 8.8 percent, according to Dane.

Although gold is not the main refuge of big capitals, analysts agree that, at least, it is one of the favorites, to the extent that “it is an asset that reserves value over time.”

Andrés Langebaek, director of Economic Studies of the Bolívar Group, points out that it is evident that the investments in gold of the last months have pressed its value quite a bit.

However, these are not compared in size with the fixed-income investments that are being made, mainly, in US Treasury bonds, securities considered as an active refuge par excellence.

This group also includes German bonds and the Japanese yen, sovereign debt with a high credit rating, fixed income with AAA rating, the dollar and the Swiss franc.

“Typically, investors use the Japanese yen (as a refuge currency). The euro was thought to be a good refuge, but because of the crises it experienced, it never became what was expected, ”says Pérez, from the Banco de Bogotá.

Meanwhile, Mario Acosta, Manager of Strategy and Economic Research at Ultraserfinco, points out that “the currencies of capital-receiving economies, at times of high volatility and uncertainty like the current one (they are also)”.

And he adds that the ‘competition’ of gold is cash, and when real rates fall gold is benefited, given that the profitability of cash is lower. Thus, with the fall seen in interest rates, metal has benefited.

And it can do more to the extent that analysts expect the Fed to maintain its policy of monetary easing, which implies, at least, other cuts in their rates until mid-next year.

The value in TES that was taken out of the country in August by foreign funds reaches 3.34 billion pesos.

“Our economists expect the Fed to begin a cycle of relaxation that goes from insurance cuts to accommodation, as US economic growth slows. We project new interest rate cuts of 25 basis points until June 2020. We expect gold to increase significantly, as real rates move to negative territory, ”they say in the BNP Paribas.

If this happens, it is likely that the ounce of gold exceeds $ 1,600 on average for the first quarter of 2020, experts warn.

Exodus of resources from foreign funds

Colombia, like the rest of the emerging economies, has been affected by the nervousness of large investors who, faced with situations like this, leave risky assets.

In fact, in August, foreign capital funds took out 3.34 billion pesos in debt (TES). They showed a strong outflow of resources and a low appetite for the country, which had been reactivated in June, they said in Alianza Valores.
For now, investor attention is focused on the direction set by the Fed’s policy, since this depends on their decisions on where to place their resources.

“In the event that the Fed does not reduce its rates in the way the market has thought, capital flows are likely to return to emerging countries, where the rate levels are higher. This could once again value the currencies of these countries, ”says Langebaek of the Bolivar Group.

But it also recognizes that “even the safest assets do not necessarily protect the best investors from losses.”