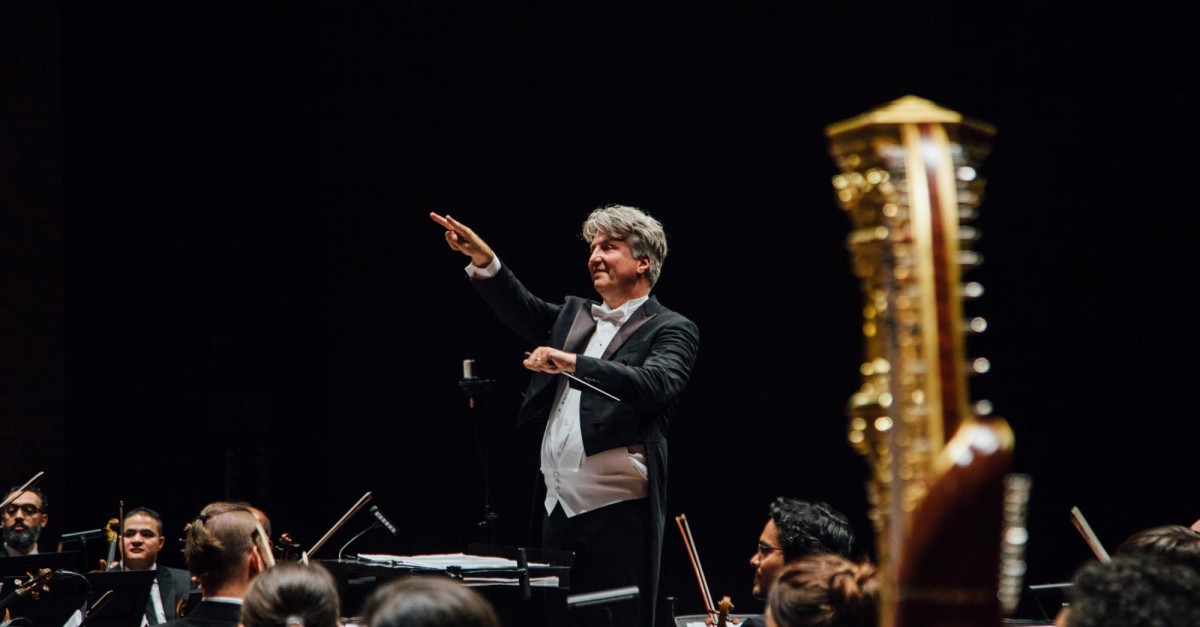 The career of Henrik Schaefer (51), current director of the Gothenburg Opera in Sweden, has been extensive. It is one that many musicians would have wanted to live. In 1991, at age 22, he joined the Berlin Philharmonic, one of the most prominent orchestras in the world. He was the youngest among the group of experienced musicians.

He arrived as a viola interpreter and since 2000 he was an assistant to the Italian teacher Claudio Abbado, who presided over the Berliner Philharmoniker for 13 years, between 1989 and 2003. At a time when Abbado was very ill, Schaefer drove many times in his place.

He directed Filarmed and soloist Peter Moore, the main trombonist of the London Symphony, at the Metropolitan in October. He had been here before, leading to the Philharmonic. That time he played small fragments of Wagner's Parsifal, one of the ones he considers among his favorite operas.

The German teacher, who was in the city, chatted with EL COLOMBIANO about returning to direct to the Philharmonic of Medellín and his work with the System (an original idea of ​​orchestras and choirs that José Antonio Abreu inaugurated in Venezuela) that Gustavo Dudamel took to Sweden to apply with refugees. Schaefer also talked about what is still missing in the talks when talking about opera today.

You were one of the youngest musicians in the Berlin Philharmonic. Now that he is a director, how is his relationship with young musicians now?

“For me that is one of the most important parts of my job, working with young musicians. I am a professor at the University of Gothenburg in Sweden and there I work with students and organize the seven orchestral programs and an opera production ”.

It also collaborates with the System in Sweden …

“Yes, another of my relationships with the younger musicians is with those of the System, in Sweden, because Gustavo Dudamel (who was a teacher in Gothenburg) started the System there too. I always work with him in a side by side concert (two orchestras together) in which the students of the university and those of the System join. At the moment there are many refugees beyond Afghanistan and Syria, where classical music is not so great. When they arrive in Europe they look for the possibility of meeting other people and being part of the city, so they enter. Many of them have practiced so much that in a matter of a couple of years the orchestra of the System has evolved in an impressive way. It's wonderful to see what music does and how it unites young people. ”

You have brought innovative ideas in front of your orchestra concerts, what are these bets about, have they worked?

“As the main conductor of the orchestra, I had two main tasks: to develop the orchestra and the audience. I think it is very important that we do not underestimate our audiences but that we try to educate them and not only to please them all the time. To develop the orchestra I started a series of concerts in which there are only concerts with soloists, who are members of the orchestra. They are in a relaxed atmosphere, there are no dark suits or ties, the light is on in the auditorium, the doors are open for people to enter and exit. When you do these concerts in a relaxed atmosphere, the rod does not seem to be so high and they play much better than in a symphonic concert. ”

And with the audience?

“We wanted to give the audience a bigger look at certain issues. We have played 360 concerts, which means to address an opera like The Fable of Orpheus, but from the perspective of different composers. From the Renaissance to the avant-garde music, the audience could hear an idea of ​​Orpheus of Monteverdi, Stravisnky, Haydn, Birdwhistell. ”

What do you most appreciate having worked and learned with Claudio Abbado?

“I think what I learned most from him is that there must be some humility. There are directors who think they always have to be in the spotlight and he always thought about how he could make the best music with the people around him. That was his gift. As well as trusting musicians. The directors make no noise, but if they trust the people who play with them and give them time to make music, this is how good music can come up. If they try to control everything, it may be a good concert, but there wouldn't be much music. I learned that from Abbado, that everyone should listen, everyone should have the right to develop their thoughts and that makes playing in an orchestra much more interesting, than if there is only one person telling them what to do. ”

What things do you think is missing about opera today?

“There are two points that I think are important: the first is that people always want to hear the same operas, so we always play the same pieces. La Traviata, La Bohème, Carmen and a few more, but there are a lot more that are fantastic that I would love to see on stage. The second point is that, at least in Europe, in the world of opera the directors usually come from the world of theater and so is their thinking. Many of them do not pay enough attention to music.

In fact, the music of these operas is just as important as the work. It seems as if the musical part is less and less and, for example, they choose the singers based on their physical appearance and not by their voice. That happens more and more and I consider it a dangerous thing because an opera with a very beautiful soprano, but unfortunately it cannot project its voice over the orchestra, is a disappointment. It is important to go back, towards the musical side ”.