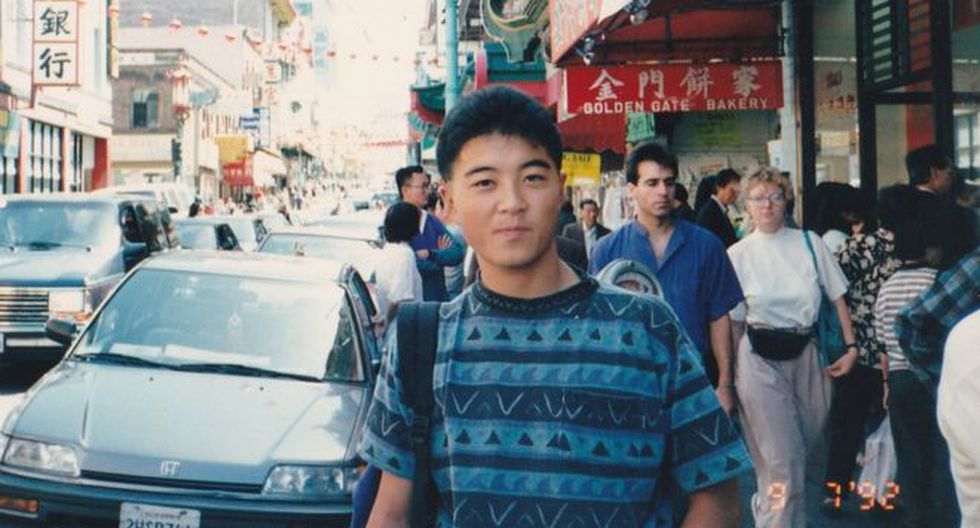 In October 1992, Yoshihiro Hattori knocked on the wrong door.

Yoshi, as he was known, was a 16-year-old Japanese exchange student who was going to a Halloween party in Baton Rouge, Louisiana, in the southern United States.

He was with his friend Webb, and they were lost.

The two boys made an innocent mistake that cost Yoshi his life.

The accident was followed by a media frenzy and then a massive campaign to change US gun laws.

Yoshi's parents, his host family in the US and a lawyer from Louisiana talked to the BBC about that day 27 that changed their lives.

In the summer of 1992, Yoshi traveled to the US, where he was going to spend a year of exchange, through American Field Service (AFS), a global youth exchange organization.

He was received in Dallas, Texas, by his hosts, the Haymakers, who took him to his home in Baton Rouge.

Yoshihiro Hattori (in a 1989 image, posing with two fish) arrived in the US in 1992 to spend a year there as an exchange student. (THE HATTORI FAMILY).

Holley Haymaker, a doctor, and her husband, Dick Haymaker, a theoretical physicist, had received exchange students before. But Hattori made an immediate impression on them, they said.

"Yoshi was a total extrovert," Holley recalled. "The students at McKinley High School loved him because he was a very free spirit."

The Haymakers' son, Webb, who was 16 at the time, tells the BBC that Yoshi had a "huge appetite for life and experience" and that he tried to make friends wherever he went.

“We are here for the party”

On Saturday night, October 17, Yoshi and Webb went to a Halloween party northeast of Baton Rouge, in the city of Central.

Yoshi was disguised as the character of John Travolta in "Saturday Night Fever," and Webb, the victim of an accident.

“We arrived at a street and saw a house that had Halloween decorations, three cars at the entrance and the address was 10311, although we wanted to go to 10131. But I saw the address and said 'here it is!'” Says Webb .

Webb Haymaker (center) talking with Japanese reporters on a trip to Japan in 1994. (AFP / Getty).

Webb and Yoshi knocked on the door, but got no response. Then they saw a woman open the side door of the garage and look outside before closing it abruptly.

“We were leaving somewhat confused, and I was wondering if it was another house,” says Webb. "But someone opened the door, Rodney Peairs."

Peairs, a 30-year-old supermarket butcher, was holding a Magnum .44 revolver, and Yoshi turned to him.

“I guess he didn't understand that (Peairs) had a gun. Maybe he thought it was something Halloween, ”recalls Webb.

Peairs shouted “Quieto!”, But Yoshi seemed not to understand and kept moving forward. Peairs shot once, hit Yoshi in the chest and closed the door.

Across the city, the Haymakers left the cinema after watching "The Last Mohican."

Police placed Holley in his pager and when he contacted them, they told him that Webb was fine, but that Yoshi was not.

Yoshi's parents, Masa and Mieko Hattori, heard about the news through an AFS worker.

Two days after the murder, the Hattori flew to New Orleans. "I was terrified," Holley recalled. "I had to take care of his son and he was killed."

But according to Holley, "the first words that Yoshi's mother said were:‘ How is Webb? "

The Hattori launched a campaign to end easy access to weapons in the US (THE HATTORI FAMILY).

Yoshi's death shocked people in Japan, where firearms are prohibited.

Masa and Mieko immediately launched a campaign in Japan calling for an end to easy access to firearms in the US.

Back in Baton Rouge, the police initially released Peairs without charges, assuming he had the right to shoot an intruder. But after complaints from the governor of Louisiana and the consul of Japan in New Orleans, he was charged with involuntary manslaughter.

His lawyers argued that he acted in self-defense. They said Peairs "was not a murderer," simply "any neighbor" who had reacted to Yoshi's "extremely unusual way of moving."

Bonnie Peairs, Rodney's wife, told the court that Yoshi had scared her and asked her husband to "take the gun."

In May 1993, Rodney Peairs was acquitted after a jury deliberation of only three hours.

Rodney Peairs' lawyers claimed that the boy could be "any of your neighbors." (Getty Images)

However, Masa and Mieko Hattori did not give up their activism for arms control.

“An old roommate of Bill Clinton”

Dick Haymaker also decided to gather signatures in the US. and got around 150,000.

Both families were in Washington in November 1993 as part of their campaign when they got Mieko to send a note to a family friend who was in the White House. "An old roommate of Bill Clinton," Dick recalled.

President Clinton spoke with the Haymakers and the Hattori in the Oval Office. "We feel we were welcome," said Mieko and Masa. “We believe that (Clinton) understood our position. I wanted strong gun control laws. ”

The Hattori and the Haymakers recognize that despite their support in private, there was little the president could do in practice.

But the campaign of both families and also the 30th anniversary of the assassination of President John F. Kennedy that month helped raise awareness about the issue.

Congress passed the Brady Act, for the prevention of violence with firearms, which mandates the review of the background of the buyers of weapons and a waiting period of five days for all purchases.

Clinton promulgated the rule a few weeks after meeting with the Hattori and the Haymakers.

The US ambassador In Japan, Walter Mondale met with the Hattori in December 1993 and gave them a copy of the law, saying they had a "very clear impact on the approval of the project."

The standard had been proposed for the first time in 1991, but it was not put to the vote until a few months after Yoshi's death.

The following summer, in September 1994, Congress approved a 10-year moratorium on the manufacture of certain semi-automatic weapons for civil use.

Dick Haymaker said it was a time when gun control seemed possible.

“Things could change, and they did change. The Brady Law was an important first step in the background check, ”he said.

Bill Clinton signing the Brady Act in November 1993, next to James Brady, who was shot in 1981 during the attempted assassination of Ronald Reagan. (AFP / GETTY).

But the Hattori struggle did not end that law. They filed a civil lawsuit against Rodney Peairs, his wife Bonnie and their home insurance company.

They contacted Charles Moore, a lawyer with experience in these cases and who had waived his fees.

"I thought the insurance would refuse to pay because it had been an intentional act and there is no coverage for the intentional acts," Moore said in a telephone interview.

To his surprise, the insurer paid US $ 100,000. Judge William Brown told the court that self-defense "was not acceptable."

"There was no justification for a murder to be necessary for Rodney Peairs to be saved," Judge Brown said.

The Hattori donated the money to finance arms control measures in the US.

Mieko and Masa remain activists. Recently, they spoke with students who survived the Parkland shooting in February 2018 and participated in the “March for our lives” in March 2018.

Masa and Mieko (center) in the "March for our lives" in Nagoya, in March 2018. (THE HATTORI FAMILY).

The Haymakers donated hundreds of thousands of dollars to arms control groups and created the Yoshihiro Hattori Memorial Fund, which seeks to help cover the costs of Japanese youth studying at Dick University, Carleton College, in Minnesota.