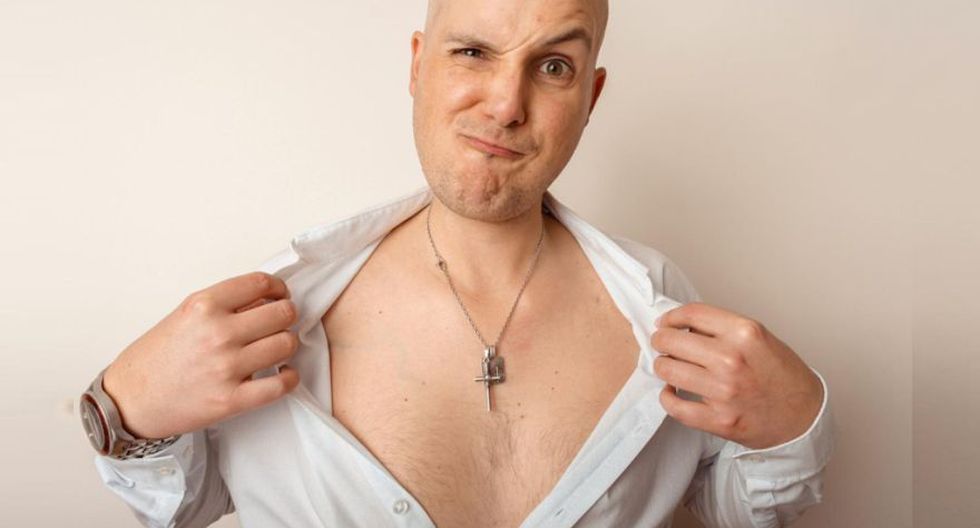 As if it were an omen of what was to come, Sergio Gabaldoni suddenly lost his vision. For no apparent reason, first one of his eyes stopped seeing. A few hours later the other followed. Then it was in complete gloom.

It was 2002 and Sergio, who was 15 years old at the time, had to be admitted to the Eduardo Rebagliati hospital. The diagnosis was made known by his father just on his birthday: acute lymphoblastic leukemia of precursors T. At that time he was not aware of what he had to live. At that time, he just wanted to return home as soon as possible so he could continue doing what he was passionate about: playing golf.

Although he soon regained his vision, his life took a drastic turn. By interrupting their studies and regular activities, the slow journey faced by people who have cancer began.

Sergio celebrating one of his birthdays. (Photo: Sergio Gabaldoni)

Dr. Jule Vásquez, an oncologist at the National Institute of Neoplastic Diseases (INEN), explains to El Comercio that leukemia is a type of cancer that affects the production of blood cells (white cells, red blood cells and platelets).

“It is cataloged mainly in two categories: acute and chronic. Acute leukemias can be, in turn, lymphoblastic (B or T, depending on the type of lymphocyte they attack) or myeloid. Its development is very fast, in a matter of weeks they attack the organism, ”he says.

"Chronic leukemias can also be lymphoblastic or myeloid, but they differ from acute ones in that patients can live with them even years before their diagnosis," he adds.

Each type of leukemia, depending on the risk, has a specific treatment. You can apply inhibitor medications, chemotherapies, bone marrow transplants, among others.

Leukemia is the most common cancer in children under 15, followed by brain tumors, lymphomas, kidney tumors and retinoblastoma. Acute lymphoblastic leukemia (ALL) is the most frequent in the pediatric population.

Leukemia is a type of cancer that affects the production of blood cells. (Photo: Shutterstock)

Sergio spent almost a year between consultations, checkups and chemotherapies. However, there came a time when leukemia returned so fast that chemotherapies were almost useless.

The doctors told his family that the only way to save his life was to perform a bone marrow transplant, so he decided to take him to the MD Anderson Cancer Center (MDACC) in Houston, Texas (USA), one of the most renowned hospitals in cancer treatment.

“Bone marrow transplantation is a widely used procedure worldwide. In the context of leukemia, it consists in using the stem cells of a compatible brother to control with them the tumor cells of the patient, ”Antonio Carrasco, a hematologist at the Anglo American clinic, who was one of the doctors of Sergio.

"In his case, his brothers were not compatible, so he chose to look for blood in an international donor bank registry. But unfortunately the candidates were not completely compatible," the specialist adds.

The doctors did not know what to do with Sergio, the problem was that the days went by and the debt of the Gabaldoni family increased. Aware of the situation, the young patient made an unusual request.

“I knew we were in debt, to the point that I asked doctors to give me injections without anesthesia, to save costs. It was something that was born to me, my parents never asked me, ”the protagonist of this story tells this newspaper.

After so many misfortunes, they received news that filled them with hope. A medical team that was testing a new technology had just arrived at the hospital. Upon hearing about Sergio's case, they became interested in him.

The team was studying an experimental protocol: the transplantation of expanded umbilical cord stem cells, and they were interested in testing Sergio.

“At that time I didn't want to know anything. I had my arms and black legs for all the bruises that the injections left me. To top it off I had a septicemia. I remember telling everyone that I wanted to go to Lima and die there. Happily my mom made me react, ”Sergio recalls.

Finally, the procedure could be carried out after a preparation. Thus, in 2003, Sergio became the second person in the world to have received an umbilical cord stem cell transplant, and the first to carry the treatment and survive the disease.

“It was a protocol that was held at the MD Anderson Cancer Center. He received the cord blood of a baby from a bank in Italy that he was compatible with. He was one of the few who received the treatment, and he was very lucky because it is a procedure of many complications, ”says Carrasco.

Indeed, it was not easy. First it was under an observation period of 100 days. During that time, he suffered several eating disorders. He lost his sense of smell and almost no longer felt a taste for food; in fact, he rejected it, which led him to lose weight tremendously.

“After the transplant, everything became hell: I could not eat, drink water or move, I only slept all day. I started the treatment with 120 kilos and left with 40, I could see all the bones, ”says the young man.

But so many sacrifices were worth it. Little by little, his health began to reestablish, although he was linked for five more years to regular consultations and check-ups, after which he was finally discharged. He had survived a dreadful experience, he had defeated leukemia.

The doctors at the MD Anderson Cancer Center were studying an experimental protocol: stem cell expanded umbilical cord transplantation, and they were interested in trying it on Sergio. (Photo: Sergio Gabaldoni)

Sergio recognizes that his attitude was decisive when facing his illness. Although there were several moments when he wanted to throw in the towel, he always assumed his entire process as if it were a cold, he never accepted that he had leukemia.

"I don't know what the magic recipe was to support everything I went through, but I think that my carefree attitude helped a lot. Maybe at that time I was not aware of the real magnitude of my illness, but that helped me not to worry about anything to come".

“For me it was all a cold that I was healed of. Several times they told me that I was going to die, they even put on my holy oils; but I never accepted it, I told everyone that it was fine, that in two weeks it would happen to me. ”

The importance of a passion.🏌️‍♂️. Although I never accepted that I was sick, I did feel some tiredness or fatigue to do things. Everything changed around me, but the only thing that remained was that feeling of not being sick, that it was something momentary and nothing more. . Looking back now, I realize how important it was for me to have a passion. For me it was golf, a feeling that never disappeared, I dreamed of playing again, of being back on a golf course, of being able to practice, I dreamed of so many things around golf, that my problems disappeared and I only dreamed thinking about all the things I could do once they let me take them to the hospital. . This photo demonstrates how, even without the strength to stand as I could go, even if I tried to hit 2 balls to the practice field, the doctors told me I could go. . I was so exhausted that I spent most of my time sitting watching the gras and the people who practiced. Only that was enough to be happy and feel connected to what I like most. . The mind is very important, even if you don't believe it. It is almost 18 years after the diagnosis of this "COLD". . Thinking calmly now I want to share tips with you to help you overcome any "COLD". . The most important thing I can tell you is to look for something you are passionate about (be it a sport, project, reading, etc.) and fly through your mind thinking and putting together all your life projects whatever it is, it costs nothing to dream. . Do not let yourself fall for the negative comments, remember that the mind is very powerful, dream big and you will see how your problems diminish and your desire to live multiply.😉 #family #moments #inspiration #hope #time #cancer #instacancer # instabrain #breastcancer #research #vida #love #strong #sport

Although Sergio does recognize that he found great allies when facing the most difficult moments: laughter and learning to make fun of himself.

“I did everything there was and there was to try to have fun. I hid to scare the nurses, joked with the doctors, made fun of my bare head and asked for sponge baths. It was wrong, but I tried to see some way to have fun. ”

In Houston, there were times when he was on the verge of death, so he and his dad stopped using watches, they could no longer think about tomorrow. That's how he learned to live the moment. Now life lives it more slowly.

Sergio has had the entrepreneurial spark since childhood. So much so that when he was interned in the United States he sold online the gifts that his mother brought from Lima for doctors. He didn't feel well lying all day without doing anything.

Back in Peru, already cured, he started several businesses. In addition, different companies began calling him to share his story of improvement.

“At the beginning I didn't believe it myself, but I realized that my story had an impact on people. I have even given talks in schools. Parents and teachers have called me to thank me for the change their children have seen. ”

Sergio giving a talk to students of a school in Lima. (Photo: Facebook Capture / Sergio Gabaldoni)

Today, Sergio is working on a project to tell his experience in writing and thus be able to help people who go through the same thing that he had to live.

Most of us are eligible for bone marrow donation for transplantation, and doing so is very simple. First you type your genetic code, which remains in a donor database. If one day a patient from anywhere in the world is compatible with you, they look for you to donate.

In Peru it is possible to be a voluntary donor through the National Registry of Bone Marrow Donors, which depends on the Ministry of Health (Minsa). For more information you can enter here.