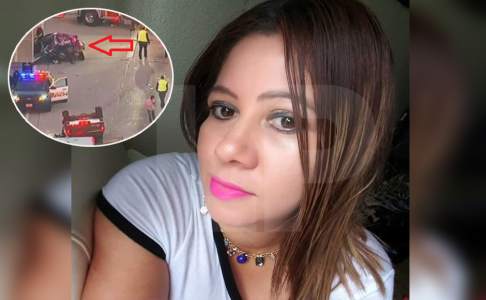 A woman of Honduran origin died Friday after a crash between several vehicles that was recorded around 6:50 am at the North Beltway 8 peripheral, at the height of J.F.K., in the city of Houston, United States.

The victim responded to the name of Mirtala López (36), originally from the department of Santa Barbara, western Honduras.

A friend of the deceased, who wanted to omit her name, told LA PRENSA that the Honduran leaves two minor children, one of six years and one of three. She was a native of the municipality of Nueva Frontera and emigrated to the United States eight years ago. He regretted his irreparable loss and requested justice from the US authorities to detain the person responsible.

In turn, he said they are requesting help in the United States to be able to repatriate the body and bury it in his native Santa Barbara, where his family and friends are.

The police kept all lanes east of the road closed for several hours, while the investigations and the lifting of the body were advanced, the Houston Univision website cites.

Detectives who arrived at the scene indicated that the victim was driving a gray Honda Civic vehicle, when the driver of a black Chevrolet Silverado truck could not control the speed and hit the rear of the Honduran car.

The impact threw the Honda against a retaining wall and the truck ended up overturned. A third vehicle, a gray Chevrolet Malibu, was also involved in the crash and hit the retaining wall.

The driver of the Honda, Mirtala López, was totally destroyed and was pronounced dead at the scene. Local authorities reported that no one else was seriously injured, and so far no charges have been filed because the investigation is ongoing.

A woman who claimed to be a friend of the Honduran woman told Univision 45 through a call that the young woman was driving to work when the fatal accident occurred.