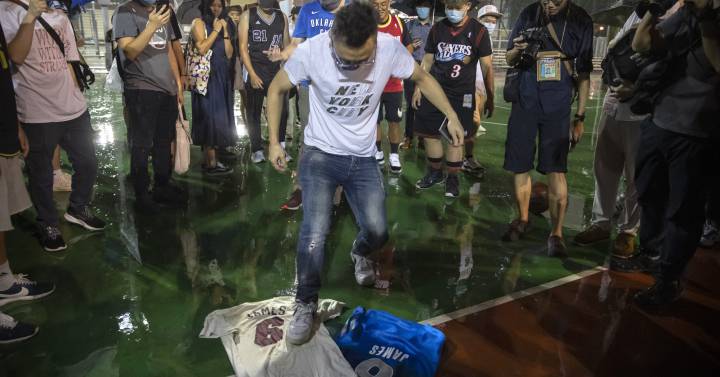 The political problems of the NBA in China now also extend to Hong Kong. LeBron James has become the target of the wrath of anti-government protesters in the semi-autonomous Chinese territory. Many of the protesters do so now also burning and trampling T-shirts and photographs of the Lakers star and the American league. It was the immediate reaction of the protesters to the position adopted by LeBron criticizing the tweet of the Houston Rockets general manager, Daryl Morey – "Fight for freedom, support Hong Kong", on October 4 – and the subsequent reaction of the NBA, which defended freedom of expression following the response of the Chinese government by suspending the broadcast of two parties and several official acts of the Lakers and the Nets in Shanghai and Shenzen.

After expressing his disagreement with Commissioner Adam Silver over the NBA's behavior in the matter, LeBron James said Monday: “I don't want to enter into a verbal dispute with Daryl Morey. But I think he didn't know enough about the situation in question, and he spoke. Either I was poorly informed or I didn't know enough about it. ” And he argued: “Many people could have been harmed not only financially, but also physically, emotionally and spiritually, so be careful what you tweet, say and do. Yes, we have freedom of expression, but sometimes there are negative ramifications that can happen when you are not thinking about others and only thinking about yourself. ” The Lakers star was referring to the risk that the players who were playing the two friendlies in China were running.

The reaction of the protesters in Hong Kong was in support of Morey, vilified by many fans in China, and of rejection towards LeBron. Many fans congregated on Tuesday and made clear their anger towards the NBA figure.

"People are angry," James Lo, a web designer who runs a Hong Kong fan page on Facebook, told Associated Press. Other fans believe that James's comments seemed to be more concerned with money than people. "He only cares about the business, about the money and losses that any problem with China could cause the NBA."