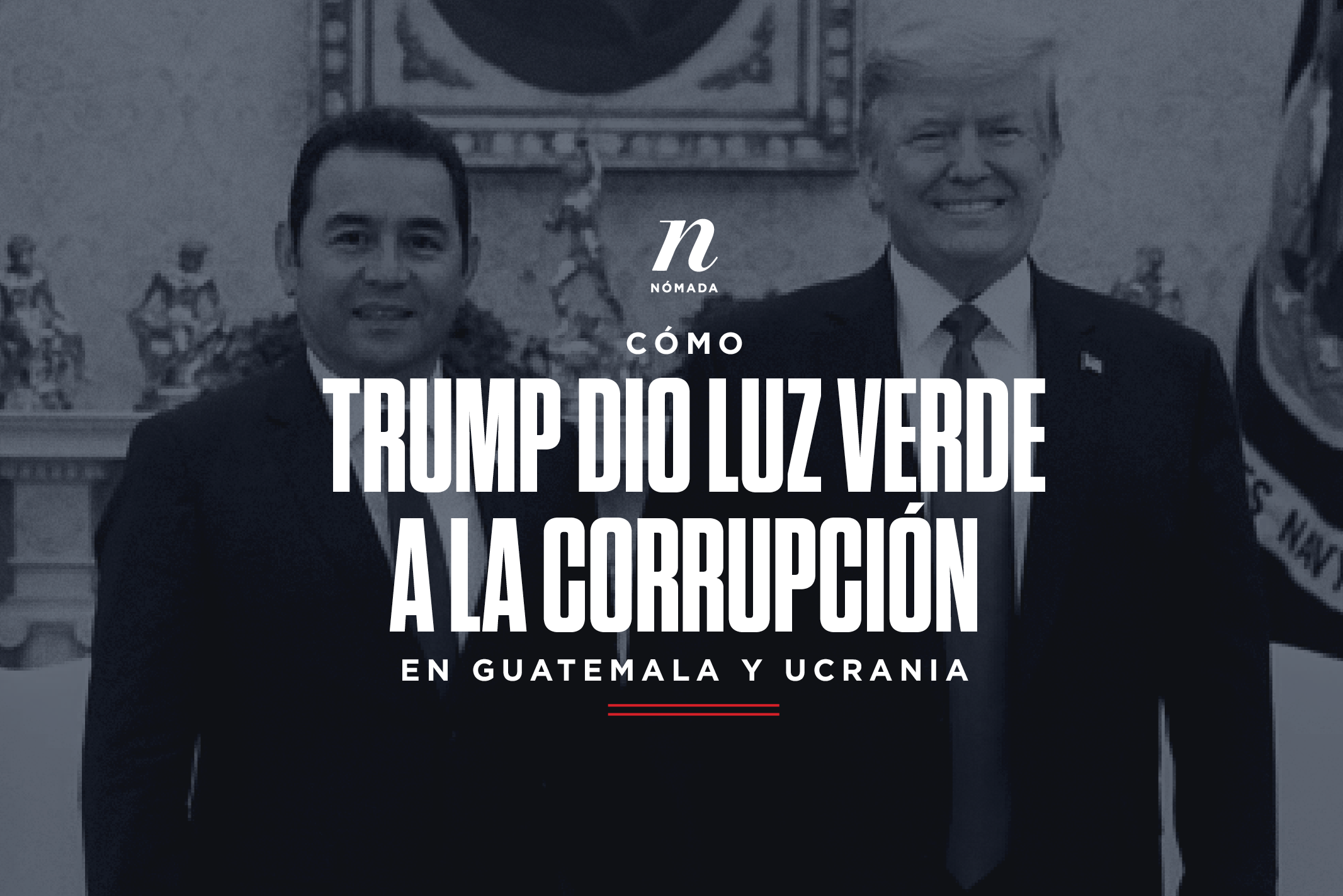 Guatemala and Ukraine have one point in common: a corruption that reaches the top of the state and the private sector. In both countries, recent anti-corruption efforts came across an impassable wall: the Donald Trump government. Now, the maneuvers of the US president in the European country have been reversed against him: the impeachment, the presidential impeachment trial, has begun in the Senate.

(You still do not receive La Jugada? Subscribe here and I received in your mail an explanation of the most important of the day.)

Congressmen accuse Trump of blackmailing the president of Ukraine, Volodymir Zelensky, for him to open a criminal investigation against Joe Biden, former vice president of the United States and his son Hunter Biden. Hunter Biden was a member of the Board of Directors of a Ukrainian company, Burisma, which was investigated for corruption. However, there is no evidence that Joe Biden has tried to influence this company or his son.

Biden could be Trump's rival in the next election. To weaken him, Trump did not hesitate to pressure the Ukrainian government and threaten to take away the military aid that the Eastern European country needs in his war against Russia. For the Democrats, this constitutes an attempt against the cleanliness of the elections. Trump put his personal interests ahead of his own country.

Throughout November and December 2019, congressmen heard numerous diplomats who served the US. UU. in Ukraine to shore up the accusations. One of the testimonies caught my attention: that of former ambassador Marie Yovanovitch.

Ambassador Yovanovitch represented the US UU. in Ukraine between 2016 and 2019. During his period he led the US efforts against corruption and supported the pro-transparency organizations of Ukrainian civil society. With this, he became powerful enemies in the Slavic country. At the beginning of 2019, a campaign of false accusations against him was spread in the United States through the FOX network and other trump media. She was painted as a puppet by Georges Soros and Barack Obama. She was accused of covering up Joe Biden's actions in Ukraine and opposing Trump's will. The campaign achieved its goal: Trump dismissed it overnight, without explanation.

Yovanovitch, still hurt by his misfortune, explained that he was not surprised that the Ukrainians who "want to continue playing with the old corrupt rules" have conspired against her. What puzzled her was that they "found Americans willing to collaborate with them, to work with them." Ukrainians who wanted to stop the fight against corruption found support in the United States.

This statement sounded familiar: in a distant Central American country, another corrupt pact had achieved exactly the same thing: finding American politicians willing to push their interests. And this, thanks to the same tools: lobbyists and disinformation campaigns. The two countries have followed parallel routes with respect to the fight against corruption.

Ukraine and Guatemala represent, according to the classic analysis of the State Department, two major risks to US national security. UU. Guatemala, for the hundreds of thousands of migrants who desperately seek to reach US territory. Ukraine, because that is where Russia and the United States wage a rehash of the cold war. In both countries, American analysts identified corruption as the great threat to their interests. In Guatemala, corruption is synonymous with poverty and migration. In Ukraine, it makes officials and businessmen easy prey for Vladimir Putin.

In keeping with the analysis of the State Department, the Barack Obama administration invested massively in both countries to reform its justice systems.

Ukraine is one of the most corrupt European countries. It maintains the 120th position, of 180 countries, in the corruption index of the NGO Transparency International (Guatemala is in 140th position). It is dominated by an oligarchy whose origin is in the elites of the communist party formed when the country was part of the Soviet Union. Its great natural resources, oil, gas, steel, coal have been concentrated in a few hands, with the backing of corrupt politicians.

In 2014, a revolution brought down the regime of Viktor Yanukovitch, an ally of Putin. In retaliation, Russia invaded Crimea, part of the Ukrainian territory, unleashing a war that has not yet ended. The United States decided to support Ukraine with fresh money and military equipment. As this New Yorker note explains well, this help allowed the US. UU. demand from its protected institutional reforms and a more determined fight against corruption. Reluctantly, Ukraine formed a research team dedicated to combating kleptocracy. This group of prosecutors, comparable to the Special Prosecutor's Office Against Impunity in Guatemala, began harassing oligarchs and corrupt politicians with the support of the FBI.

Similarly, in Guatemala, the Obama administration financially and politically supported CICIG, an international investigative body charged with fighting impunity. In 2015, CICIG discovered a criminal structure led by President Otto Pérez Molina and Vice President Roxana Baldetti. The revelations provoked mass demonstrations and forced the resignation of the president, who was arrested.

The following elections brought comedian Jimmy Morales and a clique of former military and politicians of dubious reputation to power. However, in the early years of his government, the pressure exerted by the US. UU. It allowed the fight against corruption to continue moving forward. CICIG's investigations led deputies, mayors, ministers, military and businessmen to jail. Even the almighty oligarchy was seen against the ropes. CICIG revealed the mechanisms of impunity and the roots of corruption. The president himself, Jimmy Morales, his son and his brother were investigated by CICIG and the Public Ministry.

The United States ambassadors in both countries became media figures. Todd Robinson in Guatemala City and Marie Yovanovitch in Kiev, many times went to the fore to denounce, with names and surnames, the main figures of state crime. For social organizations, always under the siege of local mafias, this support was vital.

Everything changed when Donald Trump assumed the presidency of the United States in 2017.

At first, activists in Guatemala called for calm: US anti-corruption policies. UU. They were bipartisan, they said. Republicans and Democrats would equally support the fight against corruption. Soon, disappointment came.

The sectors hit by CICIG regrouped and designed a strategy to destroy it. For this, they had to break US support for the Commission and its boss, Iván Velázquez. In 2017, as an investigation by Jody García, from Nomad, a group of businessmen and politicians, backed by Jimmy Morales, hired the services of a lobbying company close to Vice President Mike Pence. The company had to dirty the image of Iván Velázquez, the attorney general Thelma Aldana, and the ambassador Todd Robinson himself.

At the same time, billionaire Bill Browder used the case of a Russian family, the Bitkov, convicted in Guatemala for buying fake identity documents, to defame CICIG and present it as an accomplice of Putin. The misinformation campaign found powerful speakers. Among these, the Wall Street Journal columnist Mary Anastasia O'Grady and Senators Marco Rubio and Mike Lee, who managed to suspend US funding to CICIG for a while.

In December 2017, Ambassador Todd Robinson was replaced by Luis Arreaga. With him, the declarations of support to the CICIG and the criticisms of the Jimmy Morales government ended. When Morales refused to extend CICIG's mandate, the United States stopped. When Morales declared Iván Velázquez unpleasant, and then prevented him from entering Guatemala, USA. UU. He did not protest. When Gov. Minister Enrique Dagenhart dismantled the key police leadership in reducing murders and dismantling gangs of hitmen, USA. UU. He was silent.

As Joe Biden himself wrote, "there could be no clearer message for kleptocrats throughout the region that the United States is no longer in the anti-corruption team."

But in exchange for so much silence, Donald Trump had a favor to ask Jimmy Morales: sign the safe third country agreement. This unpopular agreement allows all Honduran and Salvadoran migrants captured in the United States to be deported to Guatemala, although it could be expanded to Mexican migrants and other countries. I do you a favor, you give it back to me: that's how things work with the mafia and the Trump administration.

The Ukrainian elites understood it very well, and they knew how to get a slice. Politicians such as Andrii Derkach, corrupt former prosecutors such as Viktor Shokin and Yuriy Lutsenko and billionaire entrepreneurs such as Pavel Fuchs or Ihor Kolomoisky, approached Rudy Giuliani, personal lawyer of Donald Trump. They negotiated.

The Ukrainians asked for the head of Ambassador Yovanovitch. Giuliani, Ukrainian support to arm and spread conspiracy theories that will stain Joe Biden and the Democratic Party.

In mid-2019, diplomats close to Trump contacted the government of newly elected President Volodymir Zelensky, another television comedian with no political experience. They let him know the terms of a new deal: if Ukraine wanted to continue receiving military aid, President Zelenzky would have to announce the start of a criminal investigation against Joe Biden and his son. Then, the play was reverted to Trump: an anonymous informant made public his talks with President Zelenzky and this led to the impeachment process.

In Guatemala, after three years of the Trump administration, the clevercracy chapina, more arrogant than ever, wants to recover lost time. The arrival of Alejandro Giammattei and his entourage of soldiers and businessmen of the old guard promises to continue with the route drawn by Jimmy Morales.

On the other side of the world, things are not going well either. A note from The Economist newspaper shows how much US support for the fight against corruption in Ukraine has diminished. Anti-corruption activists feel more vulnerable than ever. The same happens in other Eastern European countries: Romania, Hungary, Poland, Slovakia.

As an American diplomat told The Economist, the damage is "incalculable." “It will take decades to rebuild our credibility. What the other countries see now in the White House is everything that we preached. ” 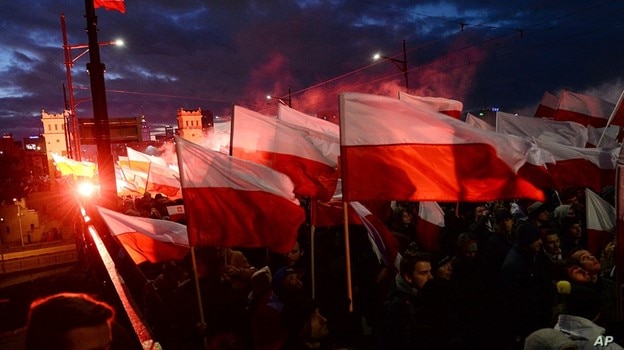 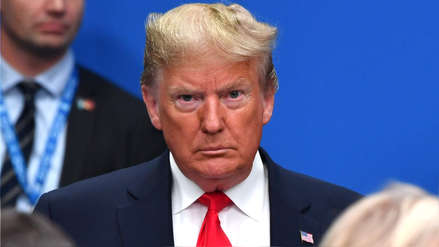