Bitcoin, Ether and FTT and other cryptocurrencies have been on the downfall putting it 66% below its all-time high in November 2021 last year, when it was trading around $69,000, according to Coinbase data.

Ether, the second most valuable digital currency, plunged 17%, and has now lost around 75% of its value since November.

This Friday November 11th 2022 BTC price went as low as 16,000 USD, sending the crypto to its lowest level since December 2020 and adding to the turmoil one of the world’s largest cryptocurrency platforms FTX filed for bankruptcy and have restricted their activity as the market collapse continues.

Around noon on Friday, FTX US temporarily stopped processing withdrawals. For some reason, they started again a few hours later, adding to the chaos of a week in which the exchange’s CEO Sam Bankman-Fried was fired.

A person familiar with the situation and on-chain data say that the shutdown was done by hand shortly after noon in New York. But by Friday night, it looked like the exchange was back to processing withdrawals.

FTX Group, which includes FTX US, filed for bankruptcy in the U.S. early on Friday. This was a day after FTX CEO Sam Bankman-Fried tweeted that FTX US was not financially affected by FTX’s “liquidity” problems.

FTX had stopped withdrawals earlier this week, but some customers in Japan, the Bahamas, and Turkey were able to start withdrawing funds again on Friday.

It is not clear what these funds will be used for. An initial bankruptcy filing suggested that FTX’s customers, who are unsecured creditors, would be able to get their assets back. However, FTX is also said to be in a $10 billion hole (and indicated that its liabilities exceed that figure).

Thursday, FTX US told users that it might stop trading in the next few days, but withdrawals would not be affected.

A notice on its website said, “Withdrawals are open and will stay open.” At press time, the notice was still on the site.

Back in June 13 2022 a similar thing happened, the celsius network, which had 1.7 million customers and was a UK-registered company that had about $3.7 billion in assets, said:

“extreme market conditions” has forced it to temporarily stop all withdrawals, cryptocurrency exchanges and transfers between accounts. we are taking this necessary action for the benefit of our entire community in order to stabilize liquidity and operations while taking steps to preserve and protect assets,” the company said in a blog post.

Fast forward to today the Miami Heat basketball team said in a tweet that they were terminating their business relationship with FTX and taking the name “FTX Arena” off. 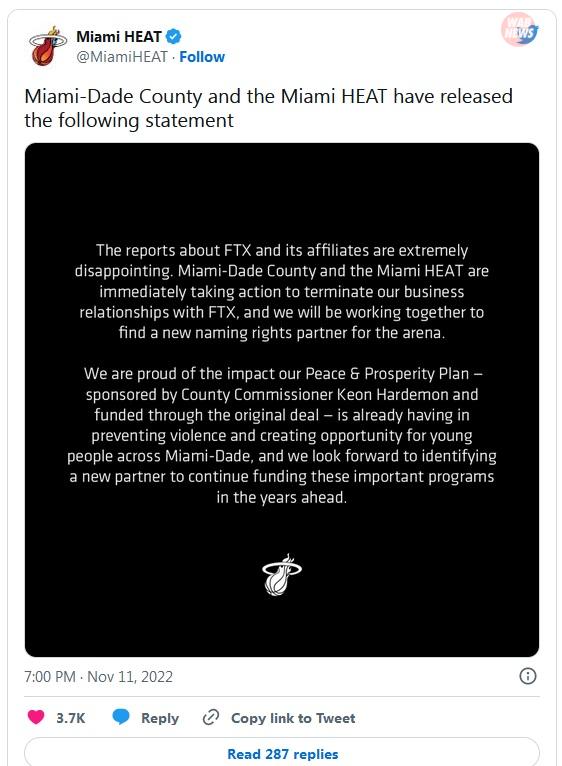 Binance, the world’s largest cryptocurrency exchange, said it backed out from a deal to aquire the FTX Exchange according to techcrunch blog and said:

Our hope was to be able to support FTX’s customers to provide liquidity, but the issues are beyond our control or ability to help,” Binance said.

FTX ex-CEO Mr. Bankman-Fried wrote that he was working on the next steps and doing what he could to protect customers, employees, and investors and said

Sorry. That’s the most important thing. I f*cked up and should have done better,”

In less than a week, a 30-year-old entrepreneur once hailed as a modern JP Morgan watched his digital empire, including billions of his own fortune, evaporate in a death spiral. that shook the foundations of the trillion-dollar crypto industry.

The cryptocurrency market has taken a hit in recent months after its pandemic boom turned bust. As the world’s major central banks have raised interest rates to stem the spiraling inflation, traders have been quick to shed riskier investments, including their volatile crypto assets.

So-called “stablecoins” — cryptocurrencies that are pegged to the value of more traditional assets — have also taken a hit. Tether, a popular stablecoin, broke its peg to the US dollar in May, debunking the idea that it could serve as a hedge against volatility.

TerraUSD, a riskier algorithmic stablecoin that used complex code to peg its value to the US dollar, crashed the same month, wiping out the savings of thousands of investors. The coin was valued at just over $18 billion in early May before its crash, according to data from CoinMarketCap.

Meanwhile, governments are closely watching the fallout from the cryptocurrency crash and could take steps to protect investors.

“There are a lot of risks associated with cryptocurrencies,” US Treasury Secretary Janet Yellen told the Senate back in June 2022. She said that her department was going to publish a report on the matter.

Failures are not uncommon in the shady and largely unregulated world of cryptocurrencies, but FTX is not your average cryptocurrency startup. Its near collapse this week represents a potential turning point for an industry that many critics say has been shunned for far too long.

So what happened to FTX and why is the entire crypto world freaking out over it? There are still many uncertainties, but this is what we know.

The report suggested that Alameda’s business rested on a shaky financial foundation. In other words, most of its assets are held in FTT, a digital token minted by Alameda’s sister company, FTX. That was a red flag for investors, as the companies were, on paper at least, separate. However, Alameda’s disproportionate holdings of the token suggested that the two were closely linked.

On Sunday, the CEO of Binance, FTX’s much larger rival, said his company was liquidating $580 million in FTX holdings. That set off a storm of withdrawals and FTX didn’t have the money to facilitate.

An alliance between rivals

By Monday, concerns about Alameda and FTX had trickled down to the broader crypto market. But Bankman-Fried was defiant, tweeting that FTX and its assets were “fine.” He also argued with Binance CEO Changpeng Zhao, whose tweet fueled the run on FTX deposits.

There was clearly bad blood between the two, which is why the industry was shocked when the pair announced a tentative deal on Tuesday for Binance to bail out FTX.

“This afternoon, FTX requested our help,” Zhao tweeted, noting that there was a “significant liquidity crisis” at the company and that Binance would need to conduct corporate due diligence before moving forward with any deal.

However, almost immediately after taking a look under the hood, Binance began to back down.

On Wednesday, cryptocurrencies continued to slide as investor anxiety over the FTX bailout spread. Bitcoin and ether, the two most popular tokens, hit their lowest level in two years.

The sell-off deepened after media reports surfaced that Binance was leaning toward walking away from the deal. Sure enough, on Wednesday afternoon, Zhao tweeted a withering assessment of FTX’s problems:

“Initially, our hope was to help FTX clients provide liquidity, but the issues are beyond our control or ability to help.”

He also alluded to allegations of “mishandled funds” and investigations by US regulators.

Binance was out. FTX’s best shot at a lifesaver was gone.
Damage control in FTX

The full extent of FTX’s financial troubles is not yet known, but various reports say the company is facing an $8 billion shortfall. Without a quick injection of capital, Bankman -Fried reportedly told investors Thursday that the company was facing bankruptcy.

Ever since the Binance deal fell apart, Bankman-Fried has been struggling to raise funds. On Thursday, he tweeted that there were “several players” the firm was in talks with.

“We spent the week doing everything we could to increase liquidity,” he wrote in his apology thread. “Every penny” of that, plus any remaining collateral, will go toward making users whole, followed by investors and employees.”

What was the FTX error?

Despite its reputation as a reliable and low-risk investment portal, FTX’s business seems to have been built on a complex and extremely risky type of leveraged trading.

Clients deposited their money to participate in cryptocurrency trading. But it appears that FTX instead took billions of dollars of that money and lent it to its sister firm, Alameda, to finance those high-stakes bets, according to The Wall Street Journal .

Bloomberg columnist Matt Levine put it another way: “FTX took their customers’ money and traded it for a bunch of magic beans, and now the beans are worthless.”

At the end of the day, FTX experienced the crypto equivalent of a classic bank run. Customers wanted their money out and FTX didn’t have it.

In traditional finance, customer funds are protected by the Federal Deposit Insurance Corporation, which insures deposits. However, the FDIC does not insure stocks or cryptocurrencies, leaving the fate of FTX customers and investors in doubt.

One such investor was the Ontario Teachers’ Pension Plan, which said it invested $95 million in both FTX International and its US entity “to gain small-scale exposure to an emerging area in the fintech sector.” In a statement Thursday , the plan noted that any loss on his investment would have a “limited impact” as it represents less than 0.05% of his total net assets.

On Thursday, Bankman-Fried said Alameda Research would scale back trading while FTX focuses on emergency fundraising.

But after Binance, the industry’s largest exchange, balked at bailing out its rival, FTX may have little choice.

Bankman-Fried told staff in a memo obtained by the New York Times that FTX had been in talks with crypto entrepreneur Justin Sun, who tweeted that he is working to “work out a solution” with FTX.

Meanwhile, US authorities, including the US Department of Justice and the Securities and Exchange Commission, are investigating FTX’s business, according to Bloomberg.