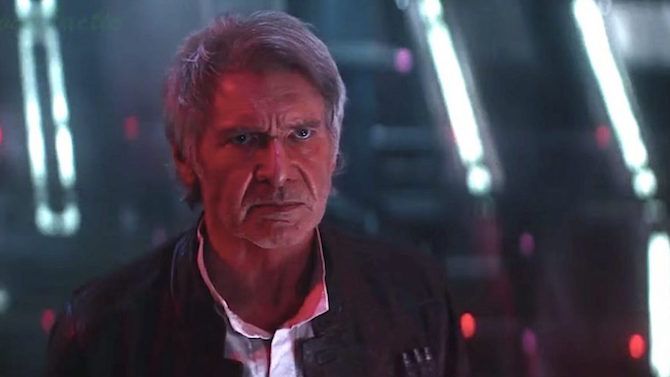 ATTENTION: THIS ARTICLE CONTAINS STAR WAR SPOILERS All of us who have seen the latest installments of the Star Wars saga remember how Han Solo, the iconic smuggler played since 1977 by Harrison Ford, was killed by his own son, Kylo Ren (Adam Driver) towards the end of The Force Awakens (2015) .Han Solo passed away at the hands of Kylo Ren in The Force Awakens, but returned in The Rise of Skywalker … how ghost of the Force? (Image: © Lucasfilm / Disney) More That unexpected death worried many fans, who feared they would never see Ford playing Solo again. And so it seemed to be in the next installment, The Last Jedi – where there was no sign of the character.Fortunately, the actor did return for a brief cameo at the close of this last trilogy, The Rise of Skywalker (2019), helping his son to find the way of redemption. However, many wonder if he could only return as a ghost – since he was not a Jedi or a Force Sensitive – or rather it was a mental projection or a mere memory of Ren.But at 77, the always sly Ford has certainly better things to do than evaluate theories he doesn’t even understand – and he said so during a recent interview with USA Today. “A ghost of the Force?” I don’t know what that is, “the actor admitted frankly.” Don’t tell anyone, I’m not talking loud enough to be recorded by your recorder. I have no idea what a ghost of the Force is. And I don’t care! ”Is that clear? Well, on the other hand, soon after Ford revealed how director JJ Abrams convinced him to resume the role of Solo in The Rise of Skywalker, despite the initial objections of the actor. “When JJ asked me to do so, I said: “You’re kidding? If I’m dead! “He remembers.” He told me: “Half dead. You can do it”. He hadn’t written anything by then. But he said, “It’s going to be great.” “So I told him it’s okay. If JJ asked you to do something, you probably would too. He’s a very persuasive guy. ”Let’s remember that in 2016, Ford confessed that he had been“ about 30 years fighting for the character to die ”- which says a lot in favor of Abrams’ persuasive skills. Next February 21 we can see Ford in his new movie, The Call of the Wild – about the adventures of a dog and his master. We will also see him in the miniseries The Staircase and in the fifth installment of Indiana Jones (still without a title, but brand new in the summer of 2021). For his part, and although the third and most recent Star Wars trilogy concluded last month of December with the premiere of The Rise of Skywalker, the president of Lucasfilm, Kathleen Kennedy, has already given us some idea of ​​how the next episodes of the franchise will be. When BBC News asked her if she imagined a director at the head of the saga He replied: “Absolutely, no doubt. We already have directors. ”“ We are doing The Mandalorian and we have two or three fantastic women working on Star Wars, and we just joined Deborah Chow, who is going to do the Obi-Wan Kenobi series. We are cultivating a lot of great talent. ”More stories that may interest you: