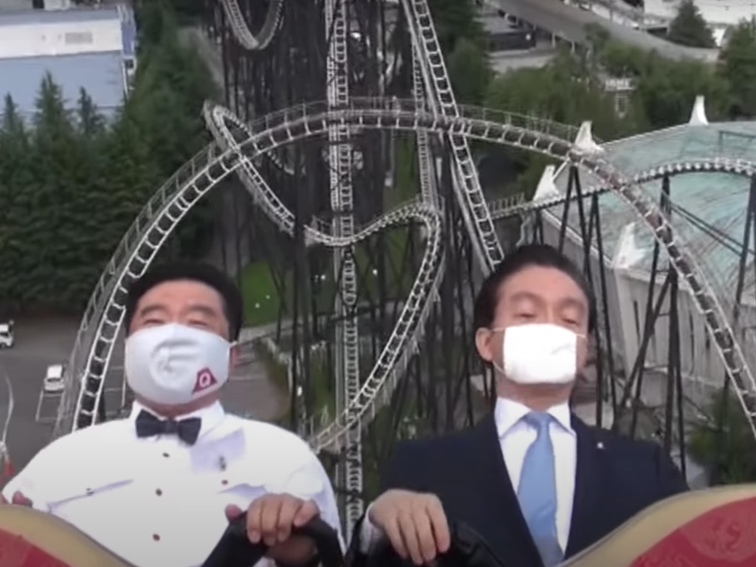 It could be the scene of a movie about the pandemic: saliva particles fall on innocent users, who scream, on a roller coaster. The Japanese think that scene is quite doable so they are taking action, albeit rather difficult to accomplish. Could you get on a roller coaster and not scream? That is the request that the associations of theme parks in Japan are making to their visitors, according to a report by The Wall Street Journal, to prevent contagion among users during this pandemic. Difficult, but not impossible.To verify that you can keep your emotions under control, the Fuji-Q Highland amusement park shows in a four-minute video Daisuke Iwata and Koichiro Horiuchi, two of its executives, who were recorded while doing the tour. of the roller coaster that reaches an acceleration of up to 128 kilometers per hour (80 miles per hour) .It is true that they show a lot of poise, but they also show that in addition to not shouting, visitors need to wear windproof mouth masks. If you saw the video before jumping to these lines, you found that not only do you have to have nerves of steel, but you also need a mask that fits and does not fly due to the speed that cars develop on some descents and curves. For this reason, one of the executives spends more time trying to accommodate his mask, than worried about resisting the urge to scream on the way. An important detail is that the message seen in Japanese in the video says: “Please scream inside your heart.” The big question will surely be: can a human being really resist the urge to scream on such a trip? Well, it is so difficult that in all horror movies, the protagonists must close their mouths with one hand so as not to reveal their location where they are hiding, protecting themselves from who wants to harm them. But what do the experts say? Playing: Watch this: Perfect series to confine your characters 3:50 New York University released a study in 2015 that reveals why humans scream. The main conclusion is that screaming activates the brain’s fear circuits, acting as a red flag. And it seems that the Japanese authorities understand that it is not an easy reaction to control, because according to the Journal article, users who scream will not be punished. The bad thing, then, with this warning, coupled with the problems of the mouthpieces seen in the video, it may be too difficult to avoid a contagion on a roller coaster.