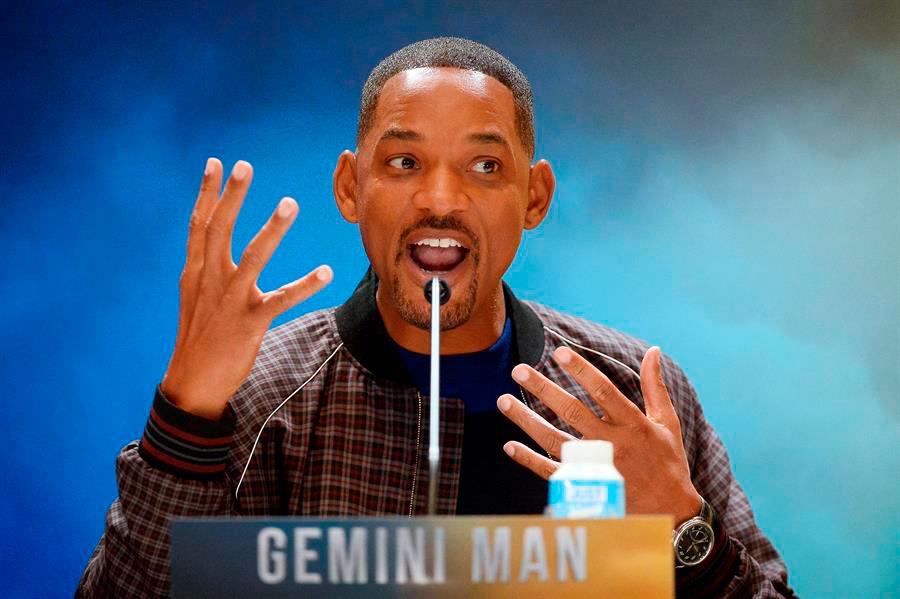 Will Smith is proud of his new clone, a 100% digital version of him but 23, the same ones he had when he triumphed with 'The Fresh Prince of Bel-Air', and with whom he shares screen and fights in 'Gemini Man' , his latest film that will take to theaters a whole technical feat.

'At first, filming with a clone seemed a bit surreal and weird, but then I saw all the possibilities … Imagine a movie with a young Marlon Brando and a young Will Smith !, defended the actor about the technological advances that They begin to invade the seventh art.

"They have not rejuvenated me, he is a man created entirely by technology, the first 100% digital human," Smith said during the presentation of the film in Los Angeles (USA), where Hollywood hopes to analyze carefully the scenes in which he, at 51, fights himself in his version just out of adolescence.

'Gemini Man' will hit theaters on October 11 as an action and science fiction tape, but also as a sample never seen of how far the capabilities and new technological developments can go.

Before the landing of the film, Smith, one of the most profitable and beloved actors in the industry, took the opportunity to share some of the reflections he had after seeing himself – and slapping – with his 'I' as a young man.

‘We are our own enemy, even if we blame others’

In 'Gemini Man', Smith puts himself in the shoes of Henry Brogen, a hitman who sees his retirement plans frustrated by the appearance of a clone of himself, but younger, who pursues him to kill him

'I love the philosophical idea that we plant the seeds of our own destruction, we are our worst enemy. We make decisions and have emotions for which we blame other people but it is our karma, 'he said about fighting his clone, created to kill him first and continue doing his job later.

What impressed him most: ‘The innocent look of my double, of not having sex’

For Smith it is a 'show' that people 'feel emoti on' when they see the performance of a 100% virtual man, which does not exist in real life but does appear on the screen.

"They told me, they can do everything but they will not falsify innocence," the interpreter recalled.

"And the eyes of the clone … It has an innocent look, of not having had sex yet, because when you have it, that look changes," he reflected.

'I would ask for advice from my 23-year-old self'

The interpreter is clear. When he saw himself again as a young man, he did not feel the classic need to want to give him advice for the future. Rather the opposite.

"My young self made some good decisions that have made me good in life, I would not give you advice, I would ask you," he said.

He took the Prince of BEL-AIR as inspiration.

Smith had to shoot the film twice, once as a real actor and the other to capture his movements and give life to the clone.

In this second part, he and the producers reviewed their interpretations and movements when he acted as a young man, in successful productions such as 'The Fresh Prince of Bel-Air' and 'Six degrees of separation'.

'They were showing me scenes and they said this … But also' This don't do it! "Https://www.diariolibre.com/", he joked.

He no longer seeks to win like when he was young

"I turned 51 last week and I am experiencing a vital transition," the star shared.

'In my youth I had ambition, I wanted to win and now I am growing towards a place where the question I ask myself before doing everything is how does this affect my work and the rest of the people?' He exclaimed.

Using clones in the cinema is possible, but even more expensive than signing Smith.

The director of 'Gemini Man', Ang Lee, is known for betting on technological advances in his tapes, such as the virtual tiger in 'The Life of Pi', but on this occasion he recognized that 'creating a human from the Nothing 'scared' a lot and examined each scene to the millimeter.

"We still don't have to worry that computer actors replace the real ones, it's too expensive, even more than signing Will Smith himself," he said.