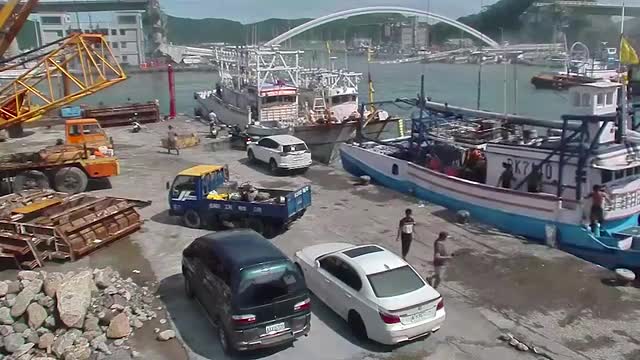 A large bridge across a bay in eastern Taiwan collapsed on Tuesday, causing a tanker truck full of fuel to fall on the boats that were under the structure . More than 60 soldiers, including divers, worked in rescue operations assisted by an Air Force helicopter and fishing vessels.  Impressive fall of a bridge in Taiwan

It was believed that one of the vessels had six people trapped , according to a statement from the national fire department. It was feared that at the time of the collapse there were about five people on the bridge , said Interior Minister Hsu Kuo-yung. Ten victims were hospitalized, six of them with serious injuries .

The structure collapsed around 9:30 in the morning in Nanfangao, a small but often crowded fishing town on the Pacific coast.

The sun was shining at the time of the collapse, hours after a typhoon fell on part of the island . The emergency teams did not clarify whether the storm had weakened the bridge or pointed to another possible cause. The Central News Agency , managed by the government, said one of the pillars of the bridge could have collapsed.

Taiwan President Tsai Ing-wen said she hoped that all government agencies would do everything possible to save people and “keep the number of dead and injured as low as possible,” according to CNA

The fall of the tank truck crushed three boats , said a spokesman for the fire department. It also caused a fire in the truck, although it did not extend beyond the vehicle.

Six of the 10 hospitalized were Filipinos and three others of Indonesian nationality , according to firefighters. It is common for fishermen registered in Taiwan to have workers from those two countries, where the salary is lower than what can be earned in Taiwan.

The 140-meter-long Nanfangao Bridge is a tourist attraction in Yilan. It was inaugurated in 1998 to replace a lower bridge that prevented large fishing vessels from passing. According to the firm that designed the 18-meter high bridge , MAA Consultants, it is the only single-arch bridge in Taiwan supported by cables and the second steel bridge with arch and cables in the world .