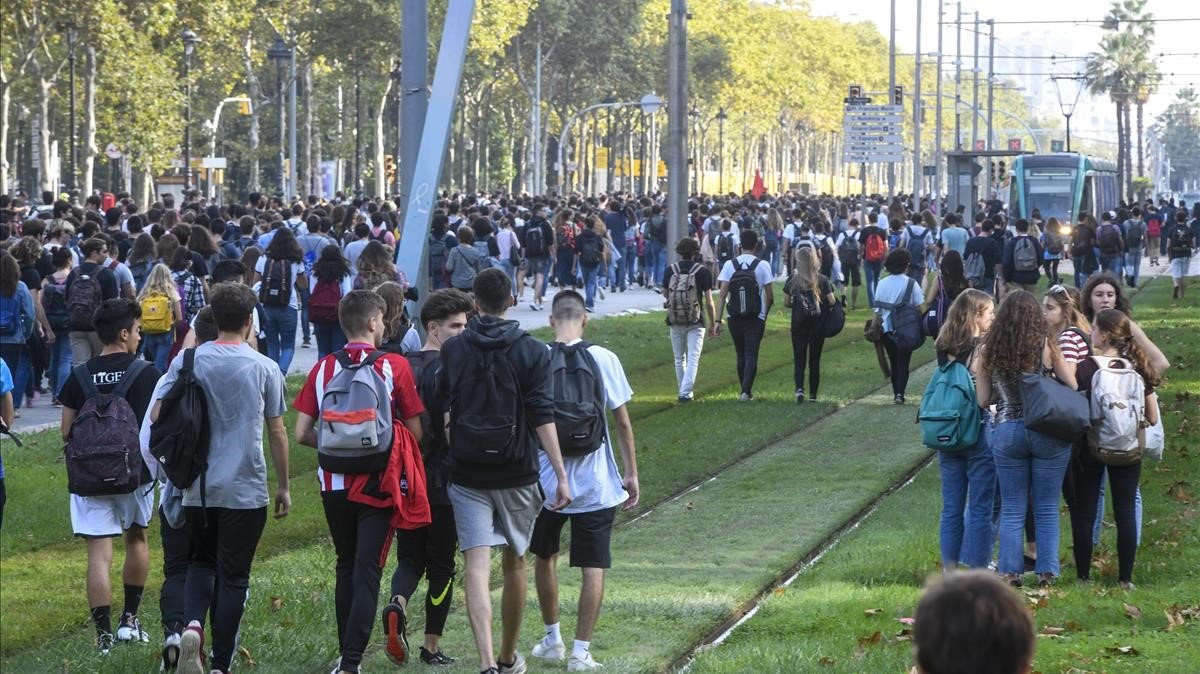 There is no mobilization that does not take place on the internet, and the demonstrations and protests that have taken place in Catalonia since this Monday the conviction of 'procés' was known are also based on a complex network of networks that are not without risks. It happened in Hong Kong; it happened in various waves of protests in Russia; it happened the last years in the mobilizations and feminist strikes in various parts of the world; and it is happening now in Catalonia: the battle for the story is fought on the net.

They are web pages, applications for devices that have been activated outside the more standardized "markets" (Play Store and AppStore) or now massive groups in instant messaging applications (Telegram is again imposed on WhatsApp).

The State Security Forces investigate who is behind the new platform that is channeling and organizing -and from where- the mobilizations in Catalonia, the so-called "Tsunami Democràtic", which has launched a sophisticated application that is only possible to access through a "QR" code used as "trust code".

More followers than in Hong Kong

From its profile on Twitter, this movement highlights today that there are already 280,000 followers in the channel that it has activated on the Telegram messaging network and that they have exceeded with that figure the number of those who joined the recent mobilizations in Hong Kong, with a population similar to that of Catalunya .

Those responsible update the profile of followers on their profile, and today they number 15,000 people who have already downloaded their application and ensure that thousands more people are already trying to get their "QR" codes to be able to register in it ; "They will end up coming," says a tweet. All application downloads involve transfers (access to photo galleries, location, etc.) of personal data, but some experts consulted by EFE have warned of the added risk of accessing applications that at the moment nobody knows where they operate from and They can do so from places where security controls and legal guarantees are more lax or do not exist.

The Tsunami Democràtic platform, which lacks identified leaders, insists through its messages in networks on the strategy of "nonviolence", but some political formations have already asked the Prosecutor's Office to act against its promoters.

His profile on Twitter already has more than 185,000 followers, but he does not follow anyone ("0 following") and from this account the calls follow up to join his application and the numerous doubts are clarified to those who have problems to download it on their devices .

But why is Telegram consolidated as an instant messaging application in this type of social movements ?; Is it safer than "WhatsApp? Eusebio Nieva, technical director for Spain and Portugal of the multinational specialized in cybersecurity Check Point, has explained that there are many similarities between the two in terms of security, but also some" nuances. "

In statements to EFE, Nieva has pointed out that WhatsApp uses "point-to-point" encryption in all user messages, while Telegram uses a different protocol in which that encryption occurs between the user and the server, so It is less safe.

However, Telegram offers a wider range of possibilities to ensure security, including using the keyboard in "incognito" mode so that it does not collect usage data or protection against screenshots in private chats; and stores its backups in a private and encrypted "cloud". This application also allows you to unilaterally delete all the history of messages that you have with a person to leave no trace, the person responsible for Check Point has observed, who has also highlighted that it allows you to have an account without providing the telephone number.

More complex are other applications, although the level of knowledge of this type of tools by users is increasing, and Eusebio Nieva has observed that those that are not available in the main "stores" (Play Store or AppStore) "They don't have the same control nor offer the same guarantees as any other service." They have not been validated by these stores, explained this expert, who has observed that all those that can be "lowered" from those "markets" exceed a series of controls to verify a minimum level of security "and are not developed for their malicious use. "

And on the "QR" codes, Nieva has warned that in reality "they are not very safe", since, when they are scanned, in reality what is achieved is a link to access another website, "and this is where the big security problem. "

In his opinion, the main problem is to know how much information is being turned into this type of services and what use will be made of all those personal data who are behind that application, something that for the moment is a mystery.