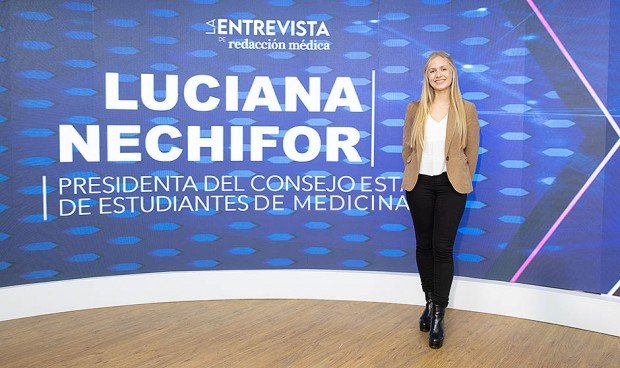 Luciana Nechifor, the fifth-year medical student at the Rey Juan Carlos University (URJC) who has recently been elected president of the State Council of Medical Students (CEEM), attends the Medical Writing set after the election. The new president, who takes over from Ángel Benegas, vindicates the need to give a voice to medical students and sets the objectives that the Council has set for this legislature. In this sense, medical students claim, among other issues, a unified study plan, MIR places that are adapted to the population’s needs or the attention to the mental health of a “particularly vulnerable” group.

Why have you decided to run as president of the State Council of Medical Students (CEEM)?

I joined the CEEM in 2017 and, although I have not held a position in this entire period, this last year I have been vice president and I have learned so much that I decided to give back to the CEEM everything it has given me. Apart from that, I have qualities that fit the presidency of a State Student Council, such as nonconformity.

What projects is the Council currently working on?

On the other hand, we come from a student body where 70 percent are women and that does not fit in with positions of power. Therefore, the campaigns and claims presume that this percentage is appropriate to reality. Regarding mental health, we did a study in 2019, together with the Spanish Society for Medical Education (Sedem), the results of which have been published in a scientific journal and we want to disseminate them. In it, we analyze what are the mental health conditions that we do not have to study the causes of the problems that this entails. Finally, as we have recovered the practices, we want them to be of quality, just as we were looking for in the pre-pandemic era.

Do you think the faculties should listen to you more?

Nechifor: “Nonsense faculties are being opened and the number of graduates and opponents of the MIR is increasing”

There are two ways of looking at it because there are very big differences between some faculties and others. In many of them, students are heard and, in addition, actions are taken. However, in others they even need the Council to support them in representation expenses to attend events or general assemblies. Apart from the difference between some faculties and others, we want to say that not only words are enough and that in the end you have to see tangible actions and not just promises from the different universities or faculties.

Do you consider that in the field of Medicine there is effective equality?

No, as in all areas of society.

Have they detected machismo in the syllabi that are currently taught in Medicine?

I wouldn’t know what to say to you, but I probably do. This is one of the things we are studying internally.

How do you assess the leakage of doctors?

“We do not advocate that the number of MIR places grow indefinitely, but that it be demographically adapted to population and social needs”

In your personal case, would you contemplate the possibility of going abroad in search of a better future?

That is never known. Right now I am in fifth grade but, what if in two years the working conditions, the 24-hour shifts – which are excessive per month – or the salary, which is sometimes a comparative offense with other professions, I don’t see it suitable? I believe that until you live, you cannot decide, but obviously I could never say no to you.

How do you rate the offer of MIR places for this year?

Obviously it is positive that the number has grown, but the State Council of Medical Students does not defend that the number of places increase indefinitely, but that it be demographically adapted to population and social needs. Are they suitable? The answer is no.

The MIR places must be adjusted to the number of graduates of the Degree. If they are not suitable, there are many students who have to re-introduce themselves or who have to look for other alternatives. There are alternatives to the MIR, but they are so small that they do not cover this excess of medical students.

How do you rate the MIR exercise?

We are seeing that we are going to an excessive specialization and that we are not staying with the key concepts. Learning every last gene that exists in a disease is not carrying anything good; we don’t keep what we really need on a daily basis.

Do you think that a Covid certificate should be required to be able to access the MIR?

Safety must be guaranteed and that there are no more infections during the test. We believe that a passport could be required, mainly because we do not know what kind of doctor you can become if you are against being vaccinated against covid. It may be that requiring the certificate completely encourages the opposite, but it really seems to us totally legitimate to require it. In the event that a student cannot obtain the COVID certificate for another reason, we believe that this isolated case should be studied and that, in some way, it be corrected with a PCR or other test.

How do you assess the increase in the openings of the Faculties of Medicine?

This also affects the lack of clinical teaching staff. In many hospitals they are saturated and there have to be two, three or even more students per tutor, when there should not be more than one person accompanying the doctor. Imagine being patient and having five students arrive to explore you… It is not feasible.

Does blended or telematic teaching work in Medicine?

At first we could not demand anything else; everything was very chaotic. Later, when things calmed down, things didn’t work out quite well. The blended method can work in a part of the Degree, but the Degree in Medicine does not work without a practical part, without a face-to-face part. This practical part is essential to acquire according to what knowledge and according to what qualities. In the theoretical part, although many prefer that it be also face-to-face, it is true that it can work. Yes, a part of the Medicine can be given in telematic format.

Nechifor values ​​the offer of MIR places for this call.

Do you consider from the Council that it would be necessary to give a generalized return to the study plans in Medicine?

Yes, of course, it is one of our priority lines this year. We would like to achieve a unification of the study plans, since there are very big differences between some faculties and others.

Regarding mental health, what do you medical students ask for to intensify this attention?

Right now what we are looking for are the causes of the deterioration of mental health in the student body. We have seen that society, in general, has mental health problems, but we believe that the medical student body is a vulnerable group. We ask that there be a psychological care service in each of the faculties that the student himself can attend for a price that he can pay. Right now we are seeing students who really have mental health problems and who cannot afford the cost of psychological care.

Do you think that vaccination should be mandatory for all medical students?

There is always some case in which the person cannot be vaccinated due to some contraindication. However, if you are going to be part of a health group, but you do not believe in the health workers who are defending the vaccine, which is the solution for the pandemic, we have a problem spreading the message in society.

Although it may contain statements, data or notes from health institutions or professionals, the information contained in Medical Writing is edited and prepared by journalists. We recommend that the reader be consulted with any health-related question with a healthcare professional.