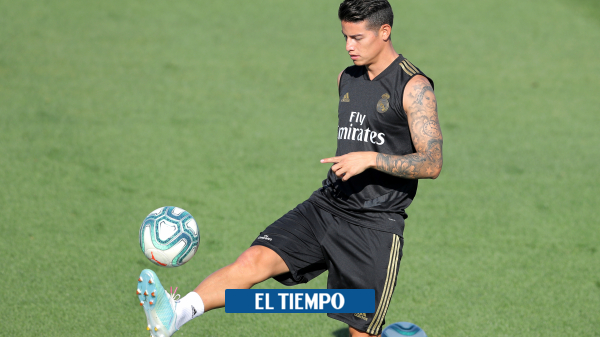 The break by date Fifa wants to take advantage of James Rodriguez to continue adding confidence in Real Madrid, training hard and show their conditions to win a place in the eleven of the Spanish team. Your mission, shine in this new era with coach Zinedine Zidane.

While the different teams, including Colombia, are preparing for their friendly matches and official competitions, the Colombian midfielder continues training to be in his best form when the activity in Spanish football resumes.

However, according to the Spanish newspaper ‘Marca’, James did not train with his teammates on Tuesday, nor did he do this Wednesday, although he was in Valdebebas, sports venue of Real Madrid.

The reason for this absence of group practices would be because "it is taking advantage to fully recover from some discomfort in the head of the fibula that drags from the game against Sevilla," adds this portal.

This set-up of James is because Zidane would need all of James's physical tank for the game against Mallorca, once the League of Spain resumes. All this because of the problems that Zidane has in the midfield with the injury of Toni Kroos and because Casemiro will come from playing with Brazil, without much training time and much wear.

In addition, the publication assures, once again, that James asked the coach of the Colombian National Team, Carlos Queiroz, not to take it into account for the friendlies against Chile and Algeria, contradicting what the Portuguese coach said, when he stated that James is not with Colombia by his decision.

Finally, on the cover of this prestigious Spanish portal Wednesday, James Rodríguez appears with the headline "The Reconquest of James." He adds: "The Colombian has won Zidane with his attitude. The coach sees him plugged in and his relationship has taken a total turn. The club celebrates this new scenario."