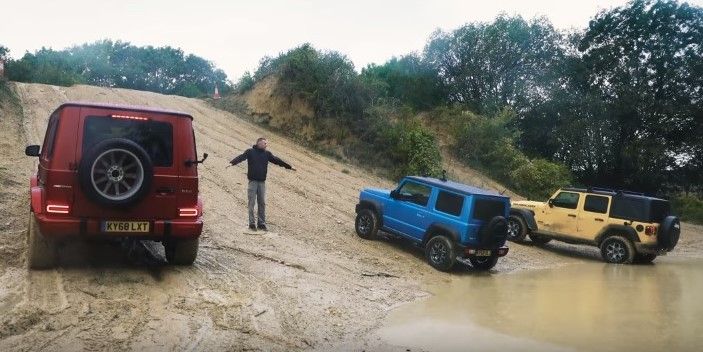 The tests that we usually watch on the Carwow YouTube channel are starring high-performance sports cars that do their best in a straight line, whether standing or running, without forgetting their braking capabilities, with the occasional SUV That escapes from time to time. On this occasion they offer us something completely different, because it is an off-road test between three 4x4s.

The candidates that will face each other during the next few minutes are three of the most demanded SUVs in the entire planet, capable of facing any difficulty thanks to their all-wheel drive systems and the powerful thrusters they use, although not everyone can boast of the latter. We say this because one of the members of the trio is a Suzuki Jimny, with his modest four-cylinder block, although that will not be an impediment to making things difficult for his rivals.

We talk about the Mercedes-AMG G 63 and Jeep Wrangler Unlimited, two much heavier, more powerful and expensive machines. But before we see what they are capable of, let's look at their numbers. The Japanese model is made up of a modest four-cylinder block with 1.5 liters and just 102 horsepower, although it has a very light weight and a reducer for more complex situations. However, its differential cannot be locked.

The Jeep Wrangler Unlimited, on the other hand, runs on a 2.0-liter turbocharged petrol engine that produces 270 horses and 400 Nm of maximum torque. Armed with locking differentials and a stabilizer bar disconnection system, the Wrangler has been a favorite among off-road enthusiasts worldwide. While the AMG G 63 uses a 4.0-liter V8 biturbo with 585 horses and 850 Nm, that is, the most powerful, long, of the three.

With these numbers, which do you think will win an acceleration race uphill and muddy? In this video that we offer you we have the answer to this question, without forgetting the other five off-road tests to see which is the best SUV of this trio.