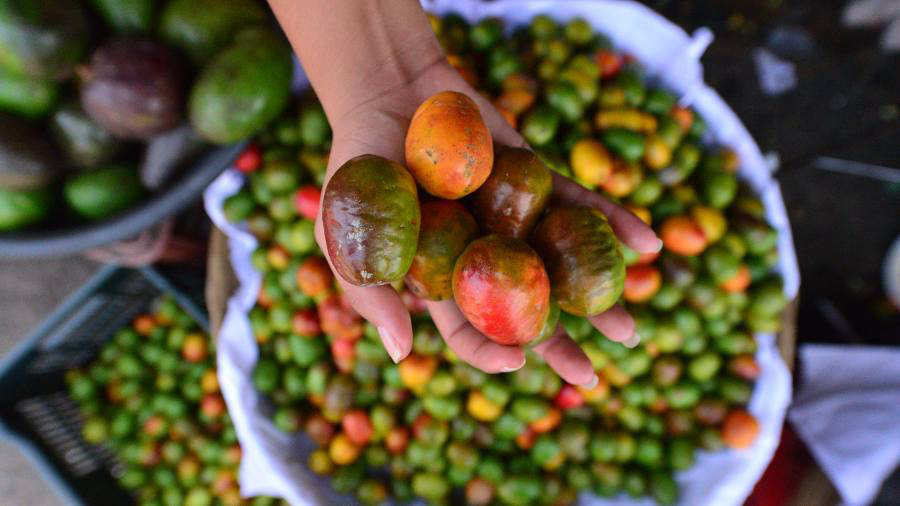 The so-called "king of fruits" is not only incredible for its delicious and sweet taste, but also for its amazing medicinal properties. Meet some of them.

Between September and October of each year in some high areas of El Salvador, including Cerro Verde and the volcanoes of Santa Ana and Chichontepec or San Vicente, one of the most delicious fruits that nature has generously given away is harvested.

This is the crown jocote, a sweet-tasting fruit that, after being harvested, is offered in the main Salvadoran markets and in several street sales. Its name is due to the small bumps, which resemble a crown, located at one of its ends.

Unlike other types of jocote, the crown is able to grow during the rainy season.

This fruit can be eaten whole or as a main ingredient in desserts and other dishes.

The crown jocote is collected and then sold in many markets in El Salvador. EDH photo / Archive

The crown jocote is rich in vitamins, such as A, B and C, minerals, such as phosphorus, iron and calcium, fiber and nutrients. It also has four of the nine essential amino acids (lysine, methionine, threonine and tryptophan) compounds needed to produce proteins. According to holadoctor.com these are some of the properties of this type of jocote.

The crown jocote contains a large amount of fiber, which can cause a feeling of fullness, helping to extend the periods between meals. In addition, it allows a good functioning of the intestine. This, together with its low calorie level, would help keep the weight under control.

The crown jocote could prevent the degenerative effects of free radicals, which facilitate the onset of diseases, thanks to its antioxidant properties. This makes it one of the best allies to strengthen the immune system.

This fruit is very abundant in this season of the year. EDH photo / Archive

Thanks to the iron and carbohydrates it has, the crown jocote is an option to energize the body and fight anemia, a disease characterized by the lack of red blood cells that carry oxygen to the rest of the cells, causing fatigue and fatigue.

Thanks to its rich content of calcium and potassium, jocote could reduce the pain caused by muscle spasms, which may be due to bad effort or insufficient minerals or vitamins.

September and October are the months where this fruit is harvested. EDH photo / Archive