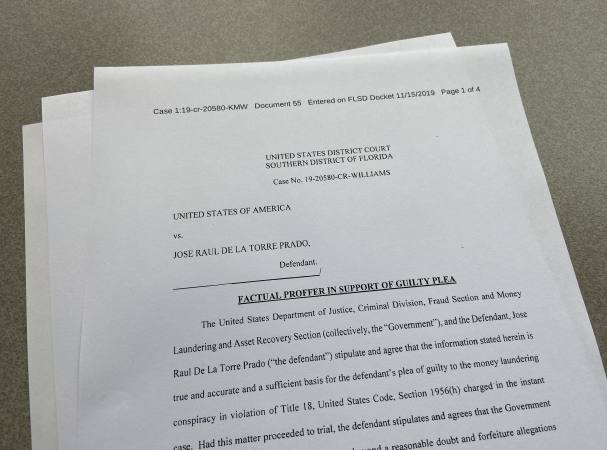 José Raúl de la Torre Prado, a former Petroecuador official until he was arrested in the United States last June, pleaded guilty in that country to the crime of money laundering received for bribes related to contracts of the state oil company.

The confession was given in Miami on November 14, but US prosecutors have not made public the name of the contracting company, the businessman who participated in the bribe, or other Petroecuador or government officials.

“Between 2018 and June 2019, the defendant, who then worked as a foreign official in Petroecuador, conspired with other Petroecuador and Ecuadorian government officials and with certain people in a scheme to receive millions of dollars in bribes in exchange for using his function to allow a company (of oil services) to obtain and maintain contracts and contractual payments of Petroecuador (the illegal scheme of bribes) ”, is reported in the document signed by US prosecutors, De la Torre Prado and its defense lawyer.

De la Torre acted together with the real estate businessman, Roberto Barrera, also arrested in Miami and who has already pleaded guilty. Prosecutors say they both requested a $ 3.15 million bribe from the company.

The company in question sent part of the bribe to accounts in Florida that were not in the name of the defendants. De la Torre received about $ 32,000 in luxury items and cash; Barrier, $ 150 thousand. They even met with the Ecuadorian businessman in Florida.

The crime of conspiring to launder money is punishable by 20 years in prison in the United States, in addition to paying fines for double the value of the assets that were part of the scheme. In the period mentioned in his confession, De la Torre worked with Pablo Flores, current Petroecuador manager. In turn, Flores acknowledged that Barrera (of the Intermediaria S.A. company) was known to his grandfather, since they had had business together on the Santa Elena Peninsula.

The former official, the nephew of Comptroller Pablo Celi, promised to collaborate with prosecutors: he will provide documentation, bank statements and a count of all his assets, including those of his spouse.

On its side, the state issued a statement in which it announced that de la Torre was in charge of specific functions related to the Pacific Refinery. He has also asked the Prosecutor to request international criminal assistance from the United States. on this case At the request of the Assembly, Petroecuador has already provided information in this regard.

Finally, the oil company stressed that, through the Office of the Attorney General and an American study, it has presented writings in nine lawsuits that are followed in the US. for bribes and money laundering, mainly. (I)