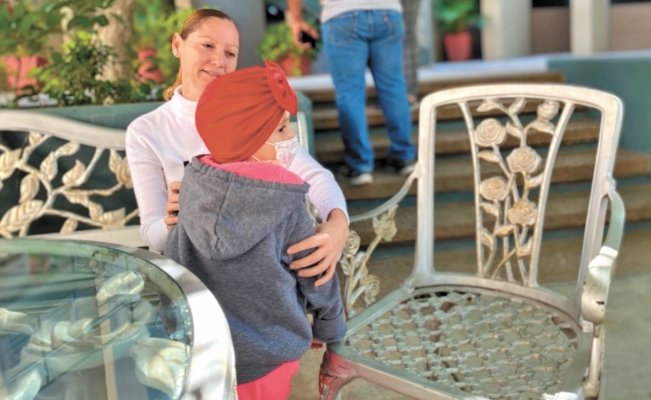 Culiacán.— Life changed for the marriage formed by Liliana Guadalupe and José the day she was diagnosed with acute lymphoblastic leukemia to Karen Itzel, her daughter under four years of age. Since then, his medical treatment has become a viacrucis.

They report that their first reaction was to feel defeated, defeated and fearful that their other two children – a boy and a girl – would present the same condition, but medical studies ruled it out and from that moment they focused on the fight to save Karen.

They say that now their greatest anguish is due to the shortage of the medications they require for their chemotherapy, so they continually turn to family and friends to cover their purchase.

José Valencia, who works as a custodian at the Sinaloa Internment Center for Adolescents, points out that he does not find how to ensure that his four-year-old child receives timely chemotherapy treatments that are applied at the ISSSTE clinic in this city.

He says that once the girl, prepared in the hospital to receive her treatment, had to return home without receiving it, because there were not several of the required medications at the hospital pharmacy, and her parents did not have money to buy them.

Liliana Guadalupe, Karen’s mother, does not give up and, despite the adversities and her precarious economic situation, maintains the faith and struggles to get the medicines her daughter needs to beat cancer in the public sector.

Ensuring treatment requires special logistics. One month in advance, the doctor gives them the prescription of the medicines they have to fill in the pharmacy, including methotrexate, so they have to be pending, with the dates of supplies that are in the hospital, before it runs out.

They report that every time the ISSSTE hospital is filled with medications, long lines of people are formed from five in the morning, with prescriptions in hand, which must wait hours to be treated. Not everyone is lucky, because they do not always supply the medicine they need, or they run out quickly.

Little Karen Itzel is scheduled to receive her next chemotherapy session tomorrow Tuesday. The weekend accompanied his parents to visit, in the State Congress, the local deputy Fernando Mascareño Duarte.

The local legislator of Morena, became his medicine manager and sometimes promotes economic support to acquire the expensive treatments that are scarce in the ISSSTE.

Five months after starting treatment, Karen’s parents are confident that the leukemia will be expired in three years.