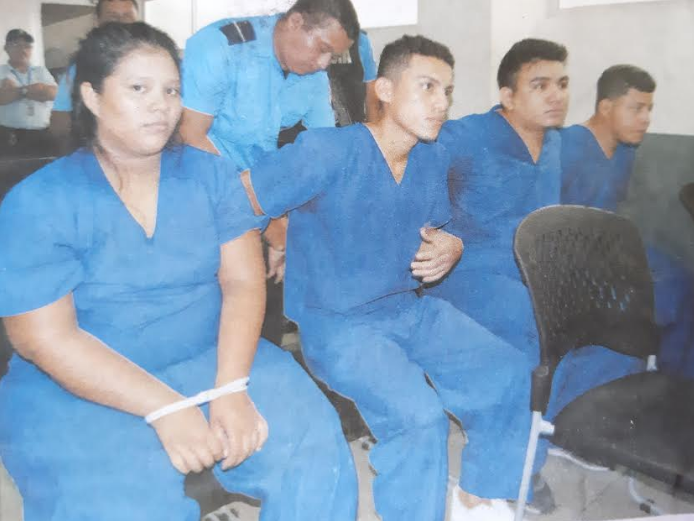 Katherine Scarleth Martínez, 18, is the only woman who was imprisoned in La Esperanza prison for having participated in civil protests against Daniel Ortega's regime. Her family recognizes that the young woman supported the protest of the students of the Polytechnic University of Nicaragua (UPOLI): she brought them food and water and participated in the civil demonstrations since April 2018.

Before being arrested, the girl was constantly threatened by a Sandinista neighbor. She was arrested on November 20 (2019) with her boyfriend, Néstor Eduardo Montealto Núñez, 27. Nestor was persecuted for his participation in civil protests, but he also had a criminal record since before April 18, 2018. The first time Nestor was in jail, he left in mid-2019 under the so-called Amnesty Law, although he was not a prisoner political.

Katherine Martínez and her boyfriend Néstor Montealto. Both are imprisoned for participating in the protests. Photo courtesy

The day they were arrested, the police arrived at Katherine's house accusing her and Nestor of causing an explosion in the sector of the Americas 3 (Managua), but at the same time they planted drugs to incriminate them for drug trafficking, said a relative of her who was present at the time of the arrest and who spoke with THE PRESS anonymously, for fear of reprisal from Sandinista neighbors. Two cousins ​​of Néstor were also arrested for developing and selling blue and white accessories, symbolic colors of civil protests.

«(The Police) put the drugs on their bed and threatened Nestor to take pictures with the drug packages rolled up with masking tape. Police also said that Katherine had drug bags in her pants bags, but she doesn't even wear clothes like that, she only uses lycra without pockets, ”said Katherine's relative.

On Wednesday, November 27, the four young people: Katherine, Nestor and their two cousins ​​- the brothers Ángel de Jesús and José Gadiel Sequeira Zamora (aged 18 and 27, respectively) – were presented in court, accused by the Prosecutor's Office of drug traffic.

Katherine Scarleth Martínez in the foreground, on November 27, 2019, when she was presented in the courts of Managua, with her boyfriend Néstor Eduardo Montealto Núñez and two cousins ​​of him, accused of drug trafficking for their participation in the protests. THE PRESS / Alejandro Flores

The political prisoner Ivania Álvarez, who was released on December 30, met Katherine at the Managua Legal Aid Directorate, known as Chipote 2, where she was imprisoned for 46 days.

«Katherine told us that she was told to take off her uniform (from prey) and handed her her civil clothes to wear (when she was still in Chipote). That only happens when you are released or when you will be transferred to the prison system. She believed that he was leaving, but what happened is that they were going to take some photos with drugs that hit him on his body, ”Alvarez said about what Katherine told him in Chipote.

Katherine's family denies all accusations against her. He says he was a third year high school student at the "Edgar Antonio Arvizú Delgado" School in Managua, and worked as a nanny. The young woman had left her studies due to political persecution, according to her family.

Katherine Martínez in her elementary graduation from the Rigoberto Cruz López School in Managua. Photo courtesy

In Nicaragua, the judicial system and the Police are institutions that have no credibility, because they function as a repressive arm of the Ortega regime. Since April 2018, the Orteguista Police, in coordination with armed groups, have kidnapped and killed dozens of people for participating in the protests against Ortega. A report by the Inter-American Commission on Human Rights (IACHR) documented 328 cases of people who died from the armed repression of the Police and parapolicies.

In mid-2019, most of the political prisoners were released, many of them under a family living regime. However, the jailed and their families are besieged by the Police and threatened by supporters of Ortega. Also many of them were arrested again. New arrests of opponents are reported every week, some are released within a few days, but others remain in jail like Katherine.

Although the young woman is on the list of political prisoners of the opposition organization Alianza Cívica, she did not date the group that was released on December 30. His case is followed by the legal advisors of the Permanent Commission on Human Rights.

Among those released from December 30, six women from the so-called Los Aguadores band came out and also the student María Guadalupe Ruiz Briceño, who for four months was the only political prisoner of the Orteguista dictatorship. Now that title is from Katherine.

The transgender woman Mayela Cruz López, a native of the municipality of Yalagüina, of the department of Madriz, also remains in Madriz. He participated in the civil protests leading the Salamasi tranque in Yalagüina. They accuse her of altering public order.