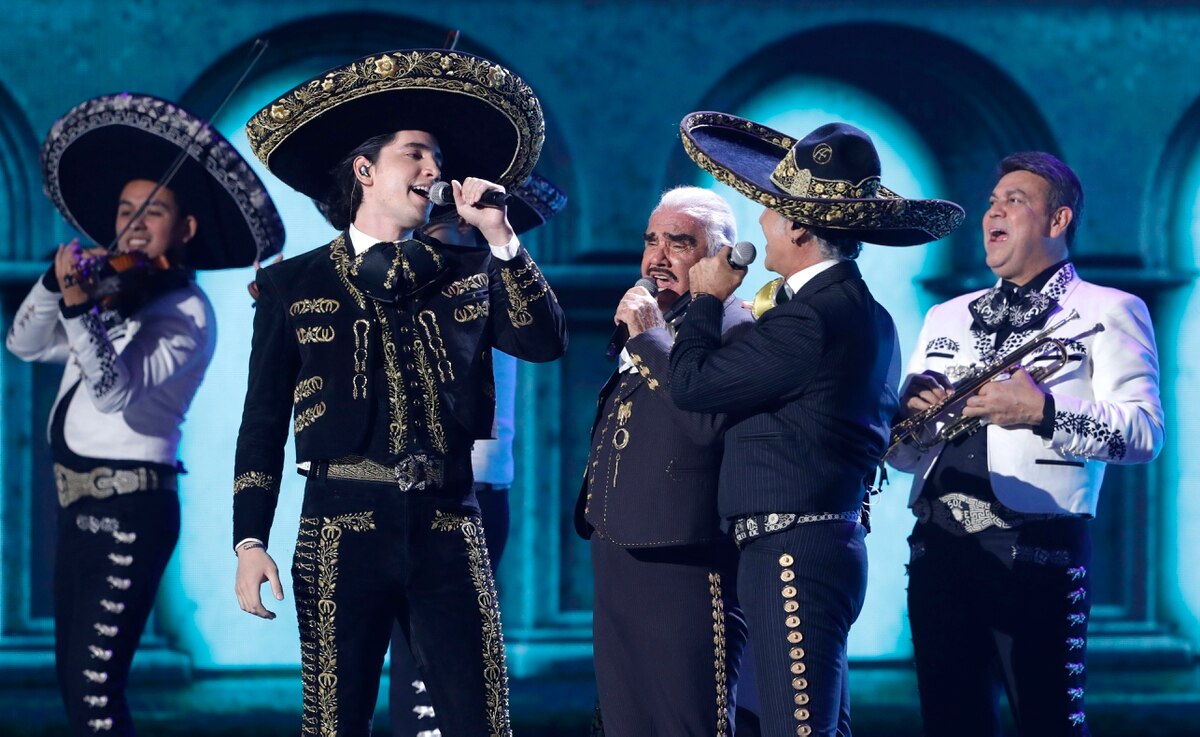 The Latin Grammy did not estimate expenses and presented a show, in which there were great tributes to artists such as Celia Cruz or José José, families reunited as Fernández, as well as the main stars of the moment: Rosalía and Bad Buuny.

At the MGM Grand Garden Arena in Las Vegas it was a very special night for The Latin Recording Academy, as it celebrated 20 editions of the most important awards ceremony for Spanish and Portuguese speaking music. There were great surprises and presentations worth remembering.

One of the most impressive presentations was its opening. As the academy had announced, a group of singers made a show in tribute to several emblematic artists of Latin music such as Celia Cruz, Juan Gabriel, Joan Sebastian and the Argentine band Soda Stereo.

The first song that was performed was "Life is a carnival" by Cuban Celia Cruz. The artists in charge of this theme were the Dominican Milly Quezada and the Puerto Rican Olga Tañón, in addition to Tony Succar being on the drums. Without rest, began "Darling" of the Mexican Juan Gabriel, sung by the band Reik, Carlos Rivera and Leonel García.

The opening continued with "Secret of love" by Mexican Joan Sebastian. The Spanish Natalia Jiménez, the Mexican band Caliber 50 and American with Dominican ancestry Prince Royce. And finally, rock was present with the song "Light Music" by the Argentine band Soda Stereo. On this occasion, Puerto Rican Draco Rosas and Chilean Beto Cuevas performed the interpretation.

Another of the great presentations was that of Panamanian Sech with his song "Another drink", which has been an international success. The one who accompanied him was the Puerto Rican Darrell. In addition, Ozuna appeared, who has already collaborated with Sech, and sang along with the Panamanian “Si te vas”.

The favorite person of the night was the Spaniard Alejandro Sanz. With his seven nominations, the interpreter sang "My Favorite Person." Although the song is a duet with the Cuban Camila Cabello, she was not present at the gala, however, the Spanish Aitana, the Venezuelan Nella and the Colombian Greeicy Rendón sang along with him.

With a red jumper and his great style that characterizes him, the Spanish Rosalía took over the stage. The five Grammys nominee turned on the public with her great success this year: "With height." This theme was considered one of the ten best songs of the year by Time magazine.

The night continued with a great Mexican flavor and with one of the most talented families in the ranchero genre. Vicente, Alejandro and Alex Fernández had the opportunity to steal the eyes of the attendees and cultivate them with the great voice that characterizes them. The first was the smallest of this dynasty with one of the songs that is in his debut album: "I will love you." Then the “Potrillo” appeared and sang his single “Caballero”.

Finally, “Don Chente” arrived, while those present stood up to cheer on the Mexican idol. The oldest of the Fernández captivated with "The defeat" and his audience responded sang with him and applauded him. However, it was not the end because his son and grandson returned to the stage and intoned significantly "Back, back."

The next song was an interpretation in Spanish and English of "Show me love" by Americans Alicia Keys and Miguel. Accompanied by the piano and lighting that simulated a sunset, the singers gave the awards a soft and light tone. Then, Farruko and Pedro Capó joined Keys and sang “Calma”, following the theme of an afternoon night on the beach.

The one who captured the eyes was the Colombian Juanes, who was awarded as the person of the year. Alessia Cara and Sebastián Yatra were with him on stage and presented an incredible show, along with choir vocals and a great band. The songs that sounded in Las Vegas were "Look good," "Want better," "I ask God," "Pretty and" The black shirt. "

The one who entered accompanied by a church choir was the Puerto Rican Luis Fonsi. He introduced himself with "Here I am", which was taken at a smooth, but fast pace, electric guitar. However, the speed of music changed with the song "Impossible", which put the audience to sing.

The tribute that was expected was for Mexican José José, who died last September 28. First, a small speech by the interpreter of “El triste” appeared on the screen years ago at other Latin Grammy Awards. "With all my heart, my greatest thanks is to God for letting me be born in Mexico, my wonderful homeland," said the singer on that occasion.

The person in charge of making this emotional offering was the Mexican Pepe Aguilar, singing the great success that the "Prince of the song" performed at the 1970 OTI festival and catapulted him to be recognized worldwide as one of the best singers in history.

The next on the list to pass in front of the public was the Puerto Rican Martin Ricky Martin, who was also the driver of the awards ceremony. Together with Residente and Bad Bunny, they brought the Latin and colorful rhythm to the MGM Grand Garden Arena with their new single "Sing it".

The last presentation was the most impressive of all. Everyone was waiting until an orchestra began to fill the venue with music. The musicians were dressed in white and were announcing the beginning of the end of the Latin Grammy 2019.

With a slight tune, "Callaíta" sounded and at the peak of the song appeared his interpreter, the Puerto Rican Bad Bunny. The winner of the Best urban album surprised with the success that has led him to win this award and closed the most important festival of Latin music.

This ended the 20th edition of the Latin Grammy, in which there were great presentations, excellent artists and many awards deserved for a long year of work.