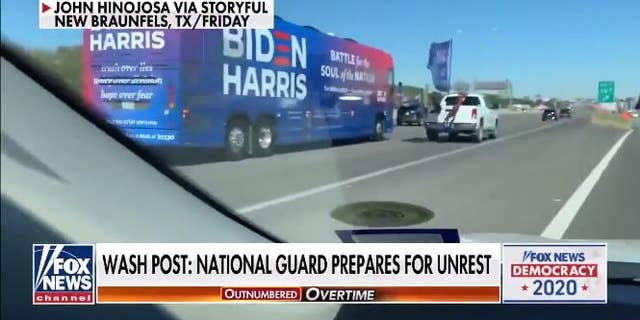 SAN MARCOS, Texas, USA (AP) – Police officers from a city in central Texas refused to provide an escort to Joe Biden’s campaign bus as he was surrounded by supporters of then-President Donald Trump on an interstate highway, according to a modified lawsuit filed by the 2020 meeting.

The updated lawsuit, filed Friday, includes the transcript of calls to the 911 emergency number, The Texas Tribune reported. The lawsuit stipulates that police officers in San Marcos “laughed in private” and “joked about the victims and their stress” on the audio recordings.

San Marcos authorities did not respond to a request for comment from the newspaper, but a spokesperson had previously said that the city council and the San Marcos Police Department would not comment as the litigation is ongoing.

In videos shared on social media on October 30, 2020, a group of cars and pickup trucks – many adorned with large Trump flags – are seen driving alongside the campaign bus as it made its way from San Antonio to Austin. Sometimes the “Trump Train” would lock up the bus. At one point, one of the pickups collided with an off-road truck behind the bus.

Biden’s bus was heading to San Marcos for a political rally that Democrats ended up canceling. Neither Biden nor his partner on the ballot, then-Sen. Kamala Harris, were on board. At the time, Trump criticized the FBI when the agency announced it was investigating the incident.