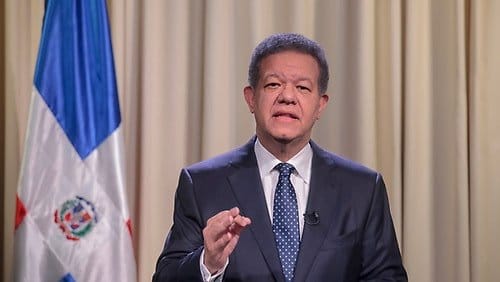 SANTO DOMINGO, Dominican Republic.- Former President Leonel Fernández reiterated his rejection of the automated vote, for understanding that this does not represent guarantees for a democratic process.

"The People's Force and all the parties it represents express our total, absolute and complete opposition to the use of the automated voting system in the next municipal elections," he said.

Fernández said that «After the election raid in the PLD primaries was completed, we requested the Central Electoral Board to carry out a comprehensive forensic audit, with the participation of technical experts from the OAS, the European Union and the United States. Instead, a fiasco was incurred, when a firm with conflicts of interest was contracted, which, in the face of the indignant reaction of public opinion, had to abandon its technical evaluation work before, even, having initiated it.

The presidential candidate listed a series of measures that the Central Electoral Board would have to take in order for his new party to agree with the execution of the automated vote, however, he said there is no time to carry them out, so he reiterated his rejection to the electronic system.

Fernández offered these statements through a radio, television and social networks network, in response to the Central Electoral Board (JCE), which on Thursday will decide whether or not to use the voting method for the municipal elections of that year.

The Plenary of the Central Electoral Board has informed that by Thursday of this week it will make a decision regarding the use of automated voting in the municipal elections scheduled to take place on February 16 of next year.

For yesterday, Monday, the representatives of the various political organizations had been summoned to express their views in writing regarding that particular.

Previously, on October 29, 2019, the President of the Central Electoral Board, Dr. Julio César Castaños Guzmán, after holding a plenary meeting of that institution, declared that the automated voting system could be used in the municipal elections of February 16, 2020, provided there was "the unanimous consensus of all recognized political parties."

On November 1, several political parties, including the People's Force, the Democratic Institutional Block (BIS), the Quisqueyano Christian Democratic Party (PQDC), the Progressive National Force (FNP) and the National Unity Party ( PUN), they expressed to the electoral body, in written form, their opposition to the use of this modality of voting.

Thus, in that way, it was evidenced that there was no unanimity on the part of the country's political forces in the use of automated voting for municipal elections, as the president of the Central Electoral Board had required in his statements.

Despite this, the Central Electoral Board convened for November 14 this month all recognized political parties and groups to know in greater detail their position on the possible application of the aforementioned method of electronic voting in the aforementioned elections; and for yesterday, Monday, as we have said, another call for the same purposes.

How much has changed the attitude of the parties, groups and political movements of the country with respect to automated voting!

In January of this year, all political organizations in the country were convened by the Central Electoral Board, with the aim of expressing their views on their use in the primary elections to choose their candidates for popular election positions

On that occasion, these political organizations unanimously accepted the proposal of the electoral authority to implement an automated voting system, as a pilot project.

It was understood that a transition from manual voting, with paper ballots, to an electronic or automated voting system, meant an advance, progress and an additional step towards modernization.

There was also the conviction that in this way there was a decrease in the risks towards irregularities and electoral fraud; and therefore, there was a mechanism with greater security.

What shocking or transcendental phenomenon must have occurred, then, so that today there has been such a drastic change in posture?

The reason is very simple: electoral fraud in the PLD primaries.

This electoral fraud could be carried out due, essentially, to the vulnerability of the system applied by the Central Electoral Board, which was not, at any time, certified with respect to international safety and quality standards, nor audited in its technological components.

All this, despite the fact that it was the Central Electoral Board itself that undertook at a hearing held on February 22 of this year to carry out the aforementioned evaluations of the automated voting system.

The situation was particularly interesting because the software program that was developed was not acquired from any recognized international company, but was designed and implemented by the internal technical staff of the Central Electoral Board itself, which had no previous experience demonstrated on the subject.

Noting about this great weakness, on several occasions our delegates and representatives submitted requests for verification and audits of the equipment and systems that would be used by the Central Electoral Board.

Faced with these claims, however, the electoral authorities were silent and never offered an answer.

After the electoral mess in the primary of the PLD, we ask the Central Electoral Board to carry out a comprehensive forensic audit, with the participation of technical experts from the OAS, the European Union and the United States.

That request was not satisfied either. Instead, a fiasco was incurred, when a firm with conflicts of interest was contracted, which, in the face of the indignant reaction of public opinion, had to abandon its technical evaluation work before even having initiated it.

In addition to what we have mentioned, it was possible to verify in the elections of October 6, the commission of various electoral crimes, which were not duly controlled by the authorities responsible for preventing them from happening.

To regain the confidence of the electors and of all the political parties in the use of automated voting for the municipal elections of February next year, the Central Electoral Board would have to adopt measures such as the following:

First, perform an audit of the source code of the software, which seeks to verify that the software running on the voting machine works correctly;

Third, an audit of the totalization software, in which the process of receiving the transmitted data is evaluated.

Fifth, a pre-dispatch audit, which consists of a comprehensive test of the electoral process, which includes the voting, data transmission, scrutiny and final audit of the voting vouchers deposited at the polls.

But in addition to all this, to provide credibility, confidence and transparency to the electoral process through the use of automated voting, a security audit would be required; other telecommunications; another compliance; another final verification; and yet another one, post-electoral.

If the Central Electoral Board could not comply, because presumably there was no time, with the few requests we made for the October 6 primaries, we are convinced that in the less than three months remaining for the upcoming municipal elections, it will not be able to comply with these additional measures that would be essential for the citizen vote to be respected.

Given all that, like the group of parties allied to the People's Force, we express our total, absolute and complete opposition to the Dominican people to the use of the automated voting system in the next municipal elections.

What we expect from the Central Electoral Board, for the municipal elections of February, as well as for the presidential and congressional elections of May, is that it can exercise its role as an independent arbitrator and organize a system of electoral integrity, respectful of the participation of the electors and guarantor of the popular will.

Thanks so much and good night.