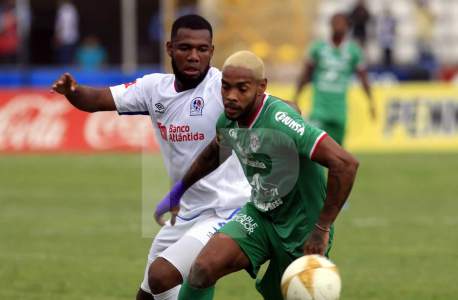 There is great game! Olimpia today receives the Marathón in a national classic with a special dye. There is a lot at stake in the National Stadium. This duel on matchday 17 of the SalvaVida League began at 4:00 pm.

El León climbed to the top of the 2019 Opening Tournament last weekend and overcame the elimination of the Concacaf League at the hands of Saprissa. They have 38 points.

The Green Monster is presented to Tegucigalpa with 37 units and can regain the leadership. Those led by Pedro Troglio seek victory and thus ensure the very final of the Apertura 2019 tournament with the pentagonal leader.

In the 13th minute, Jerry Bengtson gave the first warning in the match. Center to the area and header of the striker who went just above the Mararathón arch.

The referee Melvin Matamoros showed the yellow card to the coach of the purslane Héctor Vargas, who claims strongly with insults, this in the 16th minute.

It almost marks the Lion in the 17th with a shot by Edwin Rodríguez that deflected goalkeeper Roberto 'Pipo' López to the corner. Great move by Germán "Patón" Mejía.

Matamoros admonished the emerald captain Allan Banegas for a foul on Carlos Pineda in midfield, minute 26.

Three minutes later, Olympia was closer to the goal. Cristian Maidana left footed shot from the left wing and the ball hit the horizontal. Then at the auction Jorge Benguché hit him and the ball crashed into Bryan Barrios's arm, but he had it stuck to the body. The Monster was saved.

In the 37th minute there was a controversial move. Edrick Menjívar was left with a center purslane, wanted to play fast, but Kervin Arriaga blocked it and the ball hit the head of the wheel, ending at the bottom of the goal. The syllable annulled the goal for offside.

'Pipo' López again avoided the meringue with an excellent cover after Carlos Pineda shot from the edge of the area.