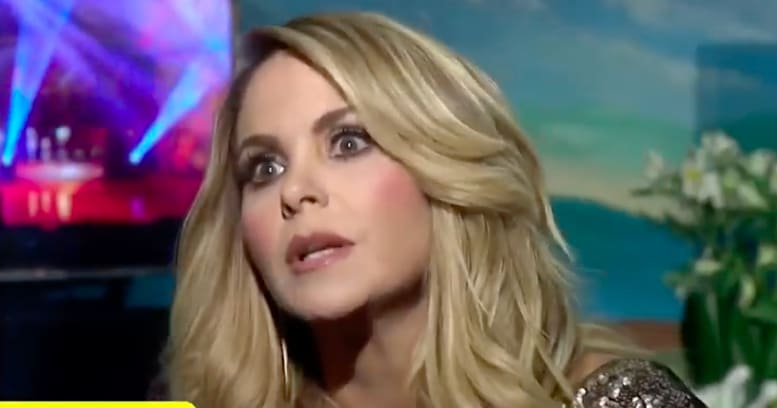 Lucero believes that defamation and slander are the worst people can do, but she says she feels protected from gossip thanks to her good reputation and that her actions guarantee her personality, so it doesn't matter if people are gossip about his personal and work life as the scandal of the supposed catalog of actresses of Televisa who were prostituted for fame, of which he assured, was part.

"Suddenly someone appears saying a fourth gossip, I would demand it, but I think it does not have a weight halved, why waste time with a neighborhood gossip," he says.

Regarding the supposed catalog of actresses of Televisa that are supposed to provide sexual services, Lucero said that everything is a lie and that someone sure invented it at a time that had nothing to do.

YOU CAN BE INTERESTED: Pepe Aguilar tells the truth about ‘rudeness’ by Ángela Aguilar in Canelo fight (PHOTOS)

“It is an urban legend, I never saw it, who saw it ?, it does not exist, fortunately I was never in a catalog of anything or in need, I never devoted myself to drugs, prostitution or alcohol, I have never done anything that I was ashamed of myself or my children, I never belonged to that, it makes me laugh, it's a nacada and a foolishness, ”he says.

She says that thanks to the communication she has with her children, she protects them from thinking that these things are true, and adds that she always tells them things and instills values ​​and principles so as not to defame others as they try with her.

The interpreter of "I Only Missed You" believes that against gossip and fake news, especially in times of social networks, you can not fight, so do not demand, but that is not something that takes away your sleep.

"It bothers me? Of course, but I don't think about it all day long, the fiery and bitter always existed, if you look good they criticize you and if it's not that you're horrendous, there are always people who will want to attack the positive and you have to avoid them, block the negative things in my life, the criticism slips, I don't care, ”he clarifies.

“Right now it is complicated because I am focused on music, I do not say that I will never make novels, I would love it, people want to see Lucero acting, acting is part of my career, I am never closed, I love that projects come to me, I always appreciate Think of me to star in a story, ”he says.

She, the only thing she would discard in her professional life, confesses is to do theater because she considers it a bit repetitive, tired and complicated.

“The theater is doing the same thing every day, I find it exhausting, when everyone rests the theater works, also in music I can make my schedule and my repertoire better, in the theater there is no way, except if you are in season, I prefer television novels and music, ”he says.

Lucero released his third album with a band called “Only You Were Missing You” where he has duets with Melendi, Carlos Rivera, Luis Fonsi, Los Recoditos, among others.

"You have to grow and evolve with the public and people, generations are added and therefore I decide to make this album accompanied by current artists from the world of music, they are also great friends, the duet with Rivera is a song written by him, to Melendi made the proposal and asked me to sing with a band, so we did the duet, it is a theme of him that is already famous, ”he says.

Lucero, according to her, sings to love in his latest album because he thinks that the problems of the world are due to lack of it, he also feels that the little tolerance and respect, coupled with the overpopulation that is lived on the planet, makes Things are more complicated.

“I am worried about many things in the world, but if we spend our lives worried about what we cannot solve in the next minute, we get overstressed, we must all become aware of what affects the planet and help a little, I think that insecurity is a world problem, how many divine and tourist places suddenly suffer terrible attacks, I think it has to do with the fact that we are many on this planet and that we are increasingly selfish, ”he says.

"The girlfriend of America" ​​says that she would love to sing ballad again because they are her origins in music, but that everything will be in due time, probably, she says, her next musical project will be about pop and will come to celebrate her 40 years of career.

“We all live in a hurry, we end up in one project and we already want to start the other one, in my 40 years of career I don't know where I will appear, maybe in Fine Arts, even if they say 'no, you can't sing there because you're not an opera' , I think that in the end one should do what he likes without thinking about what they will say, I have not planned it, but maybe yes, I am also happy because in my whole career I do not regret anything, ”he says.

The interpreter of "I Always Need You" only recorded a duet with a woman, clarifies that it was not because they are going to think she looks prettier than her, but because duets in love songs with a woman would not make her feel at ease .

“I have always liked to share with actors and actresses, when you surround yourself with someone who shines a lot, it makes you shine, what I think of duets with women is that there is no such chemistry as a couple of men and women, the same happens when I see Duets between siblings who sing and love each other and can't leave, I think 'what's up, but they are brothers, right? ”, he says.

Lucero, he declares, has always admired Manuel Mijares for his professionalism and she would not rule out recording a duet in the future because they have always got along and are always in touch with the two children they share.

"The fact that we are not married does not mean that as artists we cannot share the stage."

The actress also states that she does not need anything because she has health, life, is happy being a mother and considers that at her age she managed to have a full life, thanks to which, she says, she is always feeding her spirit of positive things.

“I get excited about new things, but it's not that I'm missing, I know that the physicist and people say it, it's very important and people do things to look better, but we have to consider that a pretty face changes over time, just like body, but the soul and the spirit can become more beautiful over time, the spirit does not wrinkle, ”he says. (With information from Agencia El Universal)