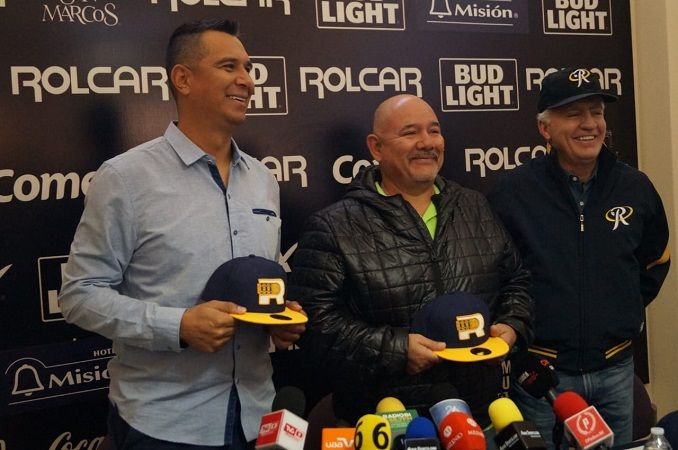 The board of the Club Rieleros de Aguascalientes made the formal presentation of his manager for the 2020 Season of the Mexican Baseball League; Chihuahuan Luis Carlos Rivera, who will be in charge of his third team in his short, but successful career as a manager. The press conference was led by the President of the team, Ing. Eustacio Álvarez, who was accompanied by Enrique "Che" Reyes , new General Manager of the club; the same event, served to make the formal presentation of the Veracruz now as a manager, an occasion that had not been made due to the commitments of Kings in charge of the Magellan Navigators in the Venezuelan winter league. “We are proud to be able to present Luis Carlos Rivera as the new manager of the Rieleros for the 2020 Season, is a young manager, who has been successful in his short career and we are sure, his experience will lead us to have a leading, competitive team but above all that is The taste of the fans, "said the President of the hydro-warm organization, Ing. Eustacio Álvarez." We have worked hard over the past few months, with the experience Enrique had in Venezuela in the winter, we have signed players that we know is going to do the job, maybe in Mexico they are not fully known, but they are elements that have quality and that you will soon see, will be a fundamental part of the team for the new season, we have full certainty that this new stage in the organization of Rieleros, will be of many successes, with the clear objective of reaching the postseason, ”said the hydro-warm director. Meanwhile, Enrique Reyes addressed the media for the first time now in his new stage as General Manager of the Rieleros de Aguascalientes. “Rieleros is a team that means a lot to me, here I finished my career as an active player and this was where I was manager for the first time; and now I arrive for the first time as a manager, this is a very important city for me in my career, I am very motivated by this new stage and I have the great commitment to form a competitive team, which I fought to get to the play off ”, said the Veracruz. Luis Carlos Rivera is a former pitcher with Major League experience; In 2000 he launched for Atlanta Braves and Baltimore Orioles, and as a manager he debuted in 2017 at the head of the Leon Braves, whom he led for a great second lap of the season until the postseason. For 2018 he returned again to the Braves who managed to qualify for the postseason in the first tournament. For 2019 he arrived in Mérida to lead the Lions of Yucatan, ending the new year with León.In the winter of 2019-20 he was the banking coach of Enrique Reyes in the Navegantes de Magallanes, in the winter ball of Venezuela, the duo managed to qualify the ninth of Valencia, falling into the wild card game against the Caribs of Anzoátegui. "I know the great responsibility that comes to lead now a team of great tradition as the Rieleros de Aguascalientes; I have a very strong commitment, not only with the fans and the board, but also with Enrique Reyes, whom I have known for many years, we have worked together, he has placed all the confidence in me for this position and I am ready for responsibility that represents being in charge of the Rieleros, ”said the new manager of the hydro-warm ship. Luis Carlos Rivera also announced to the coaching staff that he will accompany him in the 2020 Season:“ Jesús Manso and Oswaldo Pedroza will be in charge of pitching; Roberto Pérez as coach of third baseman and Juan Carlos Hernández Barandica in first, in addition to Alberto Rivera and Luis Rodríguez who will be in the bullpen.The full technical body will report on February 24, while pitcher and catchers will arrive at Romo Chávez from from March 2; the rest of the team must be complete as of March 9, to start the spring camp intensely for the 2020 season, which for the Rieleros will start on April 7, when they visit the Generals of Durango.