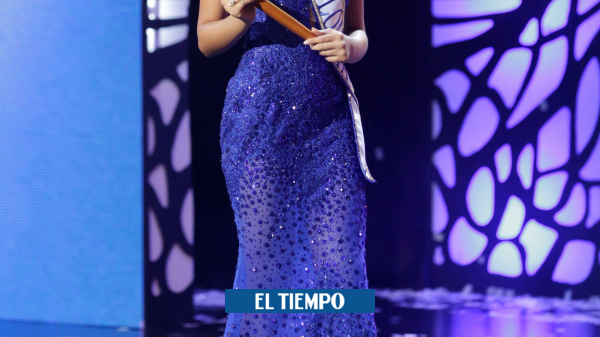 Next Thursday, November 21, Colombia will live a national strike. It will be a day of protest against various economic and social issues that, according to the conveners, the national government is proposing.

They have been joined by people from the common and different artists, actors and singers, such as Adriana Lucia, Andrea Echeverri and Héctor Buitrago, from ‘Aterciopelados’; Goyo, from ‘ChocQuibtown’, Andrés Parra, Diana Ángel, Fabio Rubiano, Marcela Valencia and Jacques Toukhmanian, among others.

One of the last personalities to join the strike was María Fernanda Aristizábal, the recent winner of the Miss Colombia contest.

In a video that circulates on social networks, and that was made minutes after its coronation in Cartagena, last Monday, November 11, the Quindian was in favor of the march.

Aristizábal said he hopes the day will make Colombians, "really", mobilize: "That we can raise our voices so that things change with which we disagree."

He also called on the president of the Republic, Iván Duque, who told him if he was going to leave "it was for something, to really move, a cause that unites us."

"I invite the president to support a lot and listen to why we are marching," he closed.

The queen's words were well received by several network users.

"Total wonder", "Getting out of the margin of being politically correct and being the voice of those who don't have it make it much bigger than having the crown" or "So much that we criticize the queens, so much that we praise the soccer players, and the first ended up teaching a lesson while the others remain silent ”were some of the compliments.

Very good for the new Miss Colombia María Fernanda Aristizábal by inviting the marches of # 21N, but better yet, for recommending the president @IvanDuque instead of opposing marches that in the past encouraged, rather, listen to Colombians why they are marching 👏👏👏👏 pic.twitter.com/YDAKZT8Cda

This is a QUEEN, gentlemen.
Leaving the margin of being politically correct and being the voice of those who do not have it, make it much larger than having the crown.

I was not mistaken, it was always mine. https://t.co/OQkorfRwJw

María Fernanda was born in Armenia on June 19, 1997. She is 22 years old and a student of Social Communication at the Luis Amigó Catholic University.

His triumph in the National Beauty Reign was the first in history for the department of Quindío.

During the contest, she also won the Healthy Body award and became Queen of the Police.

He received a prize of 30 million pesos for his coronation, in addition to an endowment of shoes from Asoinducals, a Bulova watch with 78 diamonds, accommodation in the hotels of the Estelar chain during his year of reign and a year of prepaid medicine and care Dental with Colsanitas.

It will represent the country in Miss Universe 2020.