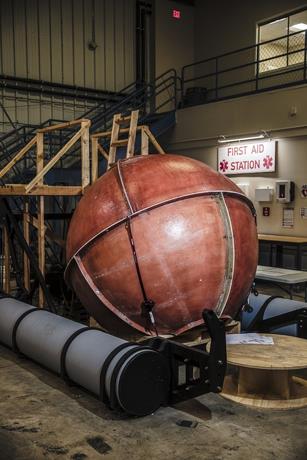 Bruce H. Robison, a marine biologist at the Monterey Bay Aquarium Research Institute in California, began to prowl the depths of the Pacific Ocean in a revolutionary vessel in 1985. In essence, it was a giant transparent plastic bubble that provided him the occupant amazing panoramic views, instead of forcing him to observe through a small porthole.

"It was absolutely transformative," Robison said recently. "The abundance of life was much greater than I had imagined." The dark ocean was alive: bright, glowing, flashing. "It was extraordinary to see all this bioluminescence and realize that it is a superior form of communication," he said. "It really changes your perspective."

More than three decades later, bubble ships have become popular, and thousands of people are appreciating the view of the deep sea. While Elon Musk and Jeff Bezos make progress in the field of space travel, another group of entrepreneurs is going in the opposite direction, seeking to expand the exploration of interior space. Fans of the submarine ship sometimes call these new submersible interior spaceships.

"They are getting deeper and deeper," said Will Kohnen, who monitors the development of the submersible bubble for the Marine Technology Society (MTS), a group of professionals. He added that most of the activity in his field arises from the growing concern for ocean health: “People want to see it firsthand. It's about connecting with the ocean. ”

The current generation of bubble boats can submerge up to 2.2 kilometers deep, a much deeper distance than the last sunbeams arrive, and can accommodate up to seven passengers. It is anticipated that there will be larger bubbles that can be submerged deeper.

The giant plastic spheres and, at least in one case, a hemisphere, are revealing the dark depths of the ocean and generating new discoveries. In 2012, a bubble submarine near Japan recorded the first video of a giant squid, a creature with a terrifying tangle of tentacles. A bubble for three passengers tracked the creature 800 meters below the surface.

In 2016, a dive near the Azores Islands of Portugal spotted a female monkfish and her small companion entwined in a sexual approach. Marine biologists considered the video as a great achievement that revealed the monk's behavioral secrets, which has long been famous for hanging a bioluminescent bait in front of its pointed teeth.

This summer, a group of scientists in a bubble near the Bahamas placed a satellite tag on a comb shark, an abyssal giant that predated many dinosaurs. The researchers said that depth labeling was an unprecedented event in the shark's own habitat and will provide more precise tracking.

The innovative vessel is the result of great advances in electronics and materials. According to Triton Submarines, a bubble submarine company in Sebastian, Florida, three tons of acrylic are needed to make a 2.1-meter-wide plastic bubble with walls that are 16 centimeters thick. The boat can accommodate three passengers and submerge them at 3280 feet, almost 1207 meters.

Submarine manufacturers are not immune to wonder. Patrick Lahey, president of Triton Submarines, said that in 2013 he was exploring the Pacific Ocean in a bubble with scientists from the Museum of Natural History in the United States when he took out his flashlight and blinked the light two or three times in the dark.

"In the distance, an animal emitted the same flicker of light," he recalled in an interview. "It was incredible. Something was communicating with us. ”

During the Cold War, the US Navy was the first entity to have a bubble certified for immersion and named it Nemo, in honor of the captain of the submarine Nautilus, from the novel by Julio Verne, "Twenty thousand leagues of underwater travel." The technology was so recent that the Navy turned to Bruce Beasley, an artist from Oakland, California, famous for his brilliant acrylic sculptures, to mold underwater spheres.

Nemo measured 1.7 meters, had walls 76 centimeters thick and could house two explorers from the depths. The submersible was tested at sea in 1970 and, in the following decade, submerged more than 600 times.

The bubble that Robinson first piloted in 1985 was a unique vessel, called Deep Rover, designed by Graham Hawkes of Deep Ocean Engineering, based in San Leandro, California.

Other commercial designers followed suit. An oceanographic team in Costa Rica has used a bubble manufactured by SEAmagine Hydrospace, based in Upland, California, for deep sea tourism and biodiversity research for more than a decade.

"They have made tons of discoveries," said Kohnen, the Marine Technology Society official who is also president of the company. "It's truly fantastic."

Now, the development of bubbles is directed almost entirely by extremely wealthy people, the typical owners of superyachts that can cost 100 million dollars or more. A bubble is perceived as a status symbol; If it costs between two and five million dollars, it represents a relatively small part of a luxury investment. Chris Cline, a billionaire businessman, philanthropist and political donor who died in a helicopter crash in July, ordered a bubble submarine for his superyacht over a decade ago.

Another of the first enthusiasts was Ray Dalio, founder of the investment company Bridgewater Associates, in Westport, Connecticut. With his superyacht and a Triton submarine, in 2012 he became the first man to record images of a giant squid in his dark habitat.

Dalio has turned his hobby into a worldwide call. Last year, he and his son Mark launched OceanX, a subsidiary of Dalio Philanthropies that encourages ocean exploration and awareness, especially through cinematography. OceanX owns two bubbles and is building a second vessel.

In September, Triton announced that Kjell Inge Rokke, a Norwegian billionaire who made his fortune in commercial fishing, will buy a bubble that can dive 2200 meters, approximately 2.2 kilometers. That figure would mark the deepest immersion that a plastic sphere has reached. Its oceanic foundation plans to use the three-passenger vessel for scientific research.

The submersible walls will be 30 centimeters thick. "A few years ago this was not possible," Lahey de Triton said in an interview. Triton outsourced its bubble production with a German team that includes Rohm, inventor of Plexiglas, a brand of transparent solid plastic.

In a booklet entitled “Luxury Submersibles,” Triton advertises a model with a capacity of up to seven people (a pilot and six passengers) that can be operated from a cruise.

Triton also set out to build an underwater tourist complex called Poseidon. You will find yourself at the bottom of a lagoon in Fiji, near a coral reef and will have 24 rooms; not bubbles, but domes made of plastic.

The rise of bubble submarines promises to pay exploratory fruits in the coming decades. “Regardless of who the pilot is,” said Robison of the Monterey Bay Aquarium Research Institute, “whether it's wealthy people with yachts or scientists with instruments, the fact that technology is evolving means that it will be much easier to do this type of research in the future ”.