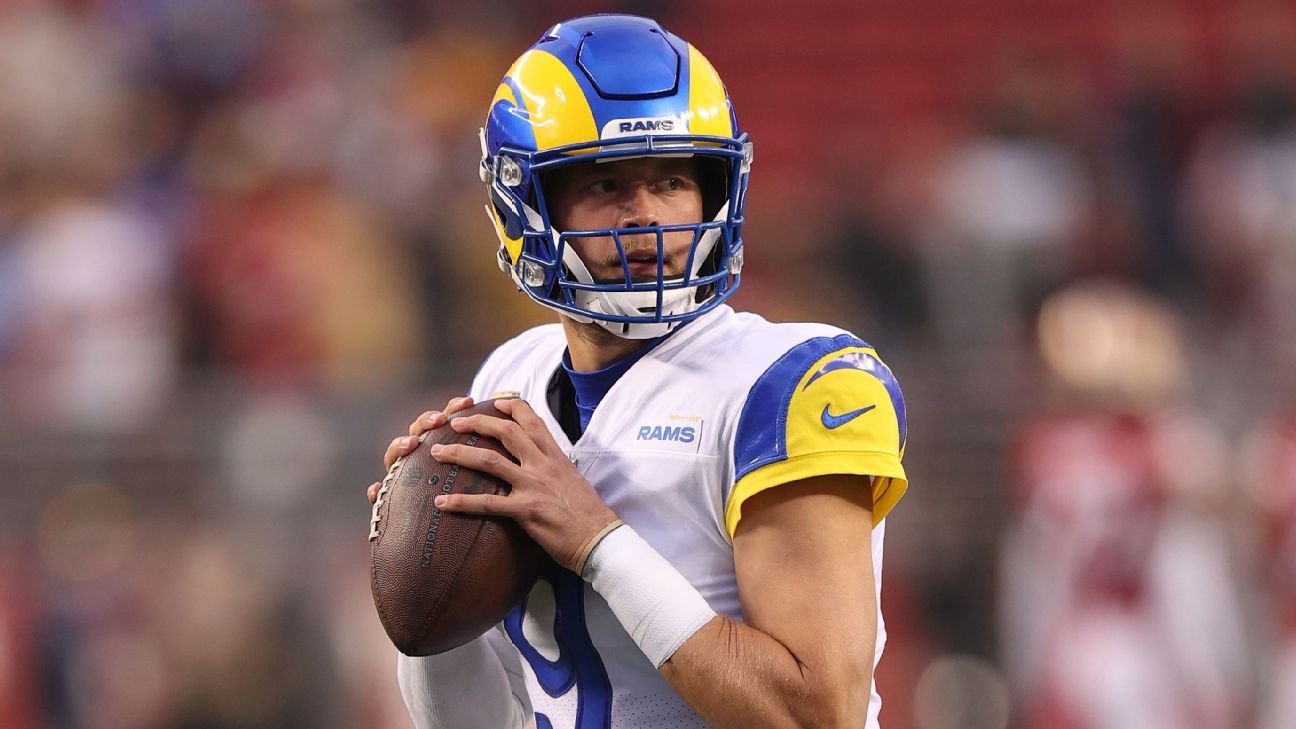 Stafford feels ready to face his first postseason game with a favorite team, both physically and mentally.

Los Angeles Rams quarterback Matthew Stafford says his toe is fine and shouldn’t affect him in Monday night’s wild-card round game against the Arizona Cardinals.

Stafford took a friendly hint at Aaron Rodgers during his weekly media session Thursday, a moment of levity amid bigger questions about the quarterback trying to win a playoff game for the first time in his 13-year career in the NFL.

Matthew Stafford prepares to face the playoffs with the Rams. Getty Images

The joke about Rodgers came about when Stafford was asked if his toe would affect his shooting. The Green Bay Packers quarterback presented his bare foot to reporters during a Zoom session in November as proof that he didn’t have “a COVID toe” but rather a fracture.

“No, I don’t think so,” Stafford replied. “I think I should feel really good on Monday. I’d show you, but I don’t want to do that. That’s for others to do. I’ll keep my toes tucked away. But it’s going good. It should be fine.”

The Rams included Stafford as a full participant Thursday, though that was an estimate as they did light training.

Stafford was asked how much he feels he needs to prove himself as he has yet to win a playoff game. He lost in all three of his appearances while with the Detroit Lions.

“Every time I walk on the field I’m proving myself, whether it’s a preseason game or a regular season game, a practice, a playoff game,” he reflected. “I want to go out there and play well. This is just another chance to do it.”

Stafford said the pressure is no different in Los Angeles compared to Detroit. Expectations could be higher, though, given how heavily the Rams have loaded their roster in a bid to win Super Bowl LVI on home turf.

That included last offseason’s trade for Stafford, who delivered a typically prolific regular season with a career-best 4,886 yards (third in the NFL) and 41 touchdown passes (second) in 17 games. However, his 17 interceptions were the most in the league along with rookie Trevor Lawrence. He threw seven interceptions in the last three games and lost a fumble in that span.

“I love the competitiveness, the way we won that division, we won 12 games with him, the standards he has for himself,” coach Sean McVay said. “One of the great things that I love most about this guy is the first thing he’s going to do is take extreme responsibility and responsibility for the things that he can do best. I think there’s a risk with some of the turnovers as a competitor. For sure Not everyone falls for him, but the answer is yes, I’m very happy with him.”

“He expects to play very cleanly in the postseason, trust his teammates, play the way he’s capable of, and if he plays within his capabilities, I’m confident that really good things will happen for this team.”

McVay said he doesn’t think the 33-year-old Stafford needs to prove he can win a postseason game.

“I think he has an established resume,” McVay said. “I think that’s something you want to achieve. He was instrumental in getting us to our first division title since 2018, but now it’s the next step. But I think his work speaks for itself and I don’t think you can limit him to saying, ‘Oh, he hasn’t won a playoff game.

Stafford’s playoff losses came after the 2011 (at New Orleans), 2014 (at Dallas) and 2016 (at Seattle) seasons. McVay noted that the Cowboys’ game might have been different were it not for a controversial decision. Detroit was ahead by three points midway through the fourth quarter when officials flagged Dallas for pass interference on third down only to reverse the call, prompting Detroit to punt and lose the lead.

“It was a bad decision that I would probably get fined for even mentioning it,” McVay quipped. “In all seriousness, here’s what’s crazy about this game: The narrative is that, but chances are, if that decision isn’t made, I’ve probably won a playoff game.”

McVay said cornerback Darious Williams will be ready for Monday night despite his shoulder injury. The team included its starter opposite Jalen Ramsey as a full participant on Thursday. Safety Taylor Rapp is making good progress, according to McVay, but remains sidelined while in concussion protocol.

Rapp’s concussion and fellow safety Jordan Fuller’s ankle injury prompted the Rams to bring 37-year-old Eric Weddle out of two-year retirement this week and sign him to their practice squad. McVay said his exact role is yet to be determined, but Weddle left no doubt he expects to play Monday, saying he wouldn’t be here otherwise.

“Once you play as long as I did, football becomes who you are,” he reflected. “So even though I haven’t played, I kept training like I was playing, although it was never a long shot for the last year and a half because I was pretty set on my decision and very happy. This is in no way that I’m itchy or anything for the style; it was just a once-in-a-lifetime opportunity, honestly.

Running back Cam Akers was not listed on the Rams’ practice report, indicating he was a regular participant. Akers went on 13 snaps last week in his first game back from the torn Achilles tendon he sustained over the summer. He gained 13 yards on eight touches against the 49ers.

“I feel like I’m 100 percent, but saying that probably doesn’t make you believe it. I’d rather go play, show people you’re 100 percent. Not show myself because I already know. Just go out there and make plays.” .