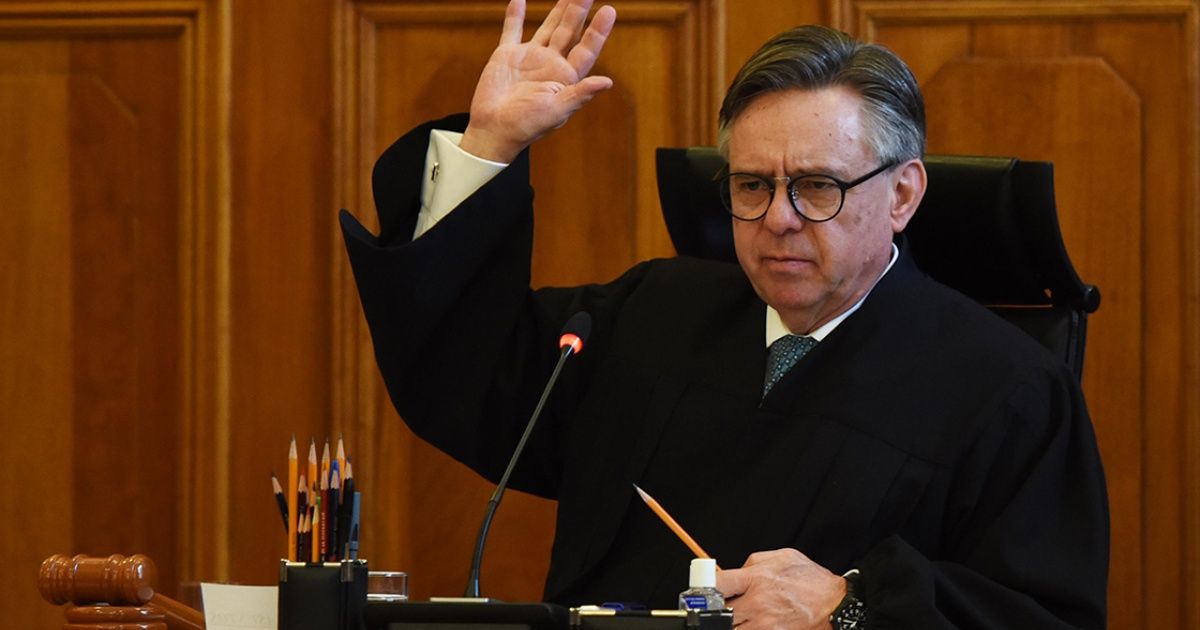 After more than four years in the SCJN, Minister Eduardo Tomás Medina Mora Icaza resigned from office, in an act never seen before in the Supreme Court of Justice of the Nation since the total relief of that organ in 1994. The action was carried out after four months of being suspected of receiving millionaire transfers from abroad, by an alert issued by the United States Department.

Last night, the Presidency of the Republic confirmed that President Andrés Manuel López Obrador had accepted the resignation of the now ex-minister and would be referred to the Senate for analysis.

The president of the Supreme Court, Arturo Zaldívar Lelo de Larrea, said last night: “in relation to the resignation of Minister Eduardo Medina Mora, I will be attentive to the determinations made by the head of the Executive Branch and, at the time, the Senate of the Republic".

Medina Mora, also a transexenal official in the governments of Vicente Fox, Felipe Calderón and Enrique Peña Nieto, retired from the position of minister, lacking almost 11 years to conclude his period.

The resignation of Medina Mora opens the space for President Andrés Manuel López Obrador to propose a new profile to the Senate, so in addition to Yasmín Esquivel Mossa and Juan Luis González Alcántara Carrancá, there will be three ministers appointed in the current federal government.

On June 5, it was revealed that the National Crime Agency and the United States Department detected that Medina Mora had received transfers in an account of HSBC UK BANK for 2 million 382,526 pounds sterling, and in HSBC USA for 2 million 130,000 dollars between 2016 and 2018, a period that includes the last three years of his position as minister.

On June 18, by letter, the minister denied that information. He acknowledged that he did have 32 financial movements, but not for 103 million pesos, but for 7 million 487,261 pesos, “amount that is consistent with the income I declared in that period”. He denied that the operations were with a bank account abroad, but in Mexico in an HSBC account. However, the Judicial Branch official did not clarify the reason for the operations and accused of violating bank secrecy. "They disseminated without my consent information concerning my private life and protected by banking and fiscal secrecy," he said.

Medina said that all his assets and their variations, as economic dependents, were included in his financial statements.

A day later, President Andrés Manuel López Obrador confirmed that the United States government notified the Financial Intelligence Unit (FIU) of the Ministry of Finance about irregular transfers from the United Kingdom and the United States to Medina Mora.

The president then requested that the FIU and the Office of the Attorney General of the Republic carry out the investigations and act in case there is a complaint. López Obrador said at the time that the accusations did not necessarily mean that the minister was guilty of any crime.

On July 17, President López Obrador ruled out promoting the total renewal of the SCJN ministers, as was the case with the Ernesto Zedillo government. However, by then, the president had already had several clashes with the members of the Court; first by urging them to reduce their salary; then, accusing them of trying to legislate on the law of maximum wages.

Given the resignation of Eduardo Medina Mora as Minister, César Astudillo, of the Institute of Legal Research of the National Autonomous University of Mexico (UNAM), he considered that this resignation is an unprecedented fact, given that it is public officials who have constitutionally guaranteed the Immobility of their charges for longer.

“When the ministers are considered in a list, prepared by the president and appointed by the Senate of the Republic, they last 15 years in the exercise of their office and then they are guaranteed immobility. That Eduardo Medina Mora has been around for four years and resigns is something unprecedented, ”said the specialist.

In that sense, he said that according to the Magna Carta, the resignations of the members of the Court will only proceed for serious reasons and it will be the president who accepts them to be sent to the Senate for approval.

proposal to expand the SCJN

From September to date, Senator Ricardo Monreal Ávila (Morena) has presented six initiatives to strengthen the judiciary. Among them, expand the number of SCJN members from 11 to 16 ministers in order to create a specialized anti-corruption room; apply trust control evaluations to aspiring magistrates and judges, and establish a system of rotation of judges in the federal entities to prevent corruption. The reforms are pending concretion in the Senate.

The coordinator of the parliamentary group of Morena in the Upper House proposes to reform from the Organic Law of the Judicial Power of the Federation to the Constitution.

The also president of the Board of Political Coordination of the Upper House, Ricardo Monreal, said that to approve the resignation of a minister in the plenary session, only the simple majority is necessary.

However, Monreal said that for the resignation, the causes must first be analyzed and if they are identified as serious, first by the Executive and then by the Senate, the resignation will be authorized. (With information from Rolando Ramos, Marisol Velázquez and Héctor Molina)

Profile of Eduardo Tomás Medina Mora Icaza
He was born in Mexico City on January 30, 1957.
Law degree from the National Autonomous University of Mexico, generation 1976-1980.
Specialized in common business law. from 1987 to 1990 he formed the law firm Medina Mora y Asociados SC.
Appointed by the Senate of the Republic on March 10, 2015, he served since then and until yesterday the position of Minister of the Supreme Court of Justice of the Nation, who had not resigned until 2030. He joined the Second Chamber of the highest constitutional court of the country.
The former presidents Vicente Fox Quesada and Felipe Calderón Hinojosa, of the PAN, and the PRI Enrique Peña Nieto appointed him and proposed for different public positions.
During his respective mandates, Fox appointed him director general of the National Security and Research Center, under the Ministry of the Interior, a position he held from 2000 to 2005. After 2005 to 2006, he was federal secretary of Public Security.
Calderón proposed him as attorney general of the Republic. After his ratification by the Senate on December 7, 2006, he held the position for three years and from 2009 to 2015 he was part of the Ministry of Foreign Affairs as Mexico's ambassador to the United States — from January 9, 2013 to March 9, 2015—; Mexican ambassador to the United Kingdom of Great Britain and Northern Ireland, accredited to the court of Saint James — from November 12, 2009 to January 2013.
Until that year he was also a permanent representative of Mexico to international organizations based in London.
To be minister of the Court was proposed by Peña Nieto.
Between 1991 and 2000 he was deputy director of the Group Desc SA de CV, as well as corporate director of Management Control; Corporate Legal and Strategic Planning Director, and Corporate Deputy Director of Strategic Planning. He was part of the Business Coordinating Council from 1996 to 2000.
He joined, from 1991 to 1993, the negotiating team of the North American Free Trade Agreement as an advisor on the issues of Agriculture, Standards, Unfair Trade Practices, Investment and Rules of Origin; coordinator of the private sector legal group in the task of advising negotiators.