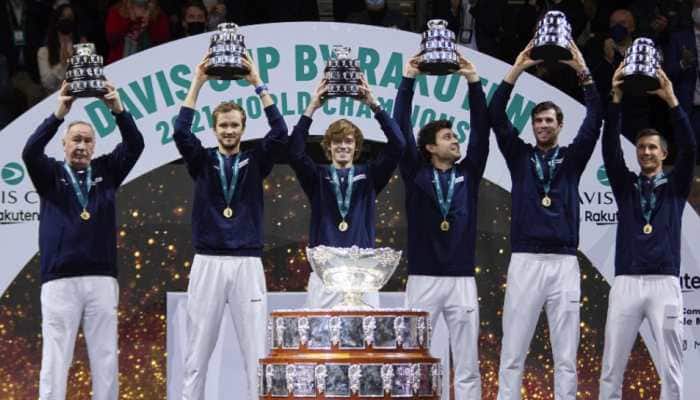 The number two in the rankings capped off a great individual year, beating Marin Cilic 7-6 (7), 6-2 in the second singles match as the Russians took an insurmountable 2-0 lead against Croatia in the final.

This is Russia’s third title at Davis, and the first since 2006.

It was the fifth straight-sets victory in the Davis Cup for Medvedev, who three months earlier defeated Novak Djokovic to enshrine himself at the US Open and claim his first Grand Slam title.

“It’s been an incredible two weeks,” Medvedev said. “It is not easy to dispute this at the end of the season. They feel like the best weeks of my career. “

Earlier in the day, Andrey Rublev grabbed the first point by beating Borna Gojo 6-4, 7-6 (5) at the Madrid Arena.

Russia also won the Silver Salad Bowl in 2002. Croatia was also seeking a third title following their consecrations in 2005 and 2018.

With its flag vetoed due to sanctions imposed on the country for anti-doping rule violations, Russian tennis grabbed both team titles this year. The women won the Billie Jean King Cup crown in Prague last month. The last nation to complete the double was the Czech Republic in 2012.

The victory in Madrid capped a special week for Russian captain Shamil Tarpischev, the longest-serving leader in the Davis Cup. He was captain for the first time in 1974 and made his 100th game as captain in the semi-final against Germany.

“It was a difficult match. The tiebreaker was a matter of a couple of points. I double faulted on a set point and that was a huge mistake, but very happy to have taken it forward. “

Rublev had to push himself against Gojo, who came to Davis as number 279 in the rankings and but had won all three of his singles matches.

It was the third successive victory for Rublev, fifth in the ranking, after falling to Spaniard Feliciano López in the group stage.

Croatia was coming off eliminating the Serbia of world number one Novak Djokovic in the semifinals.