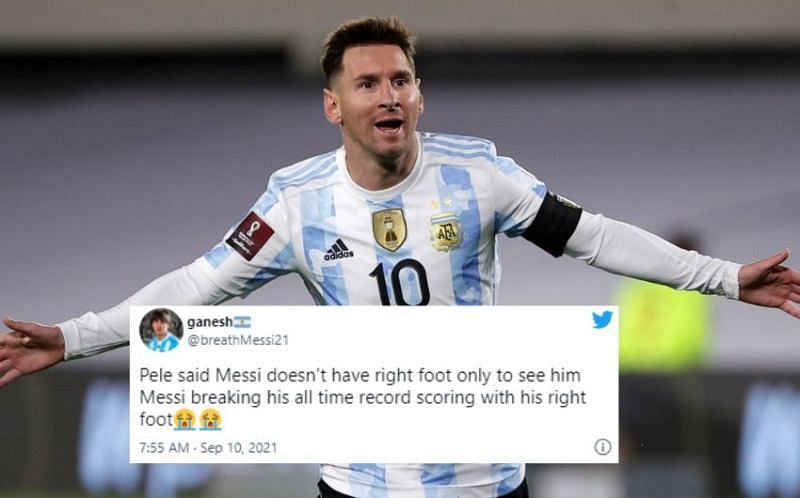 BUENOS AIRES (AP) – If anyone believed that Lionel Messi would be satisfied with a Copa América, they were wrong.

Captain Albiceleste surpassed Pelé as South America’s top scorer in national teams by reaching the 79-goal mark thanks to a hat-trick for a 3-0 victory over Bolivia on Thursday at the Monumental Stadium in Buenos Aires for the Qatar 2022 World Cup qualifier.

“I really wanted to be able to enjoy it. I waited a long time for this, we won the game that was the important thing, ”said Messi.

With tears in his eyes, the star valued the continental title won in Brazil at the beginning of July more than his record as a scorer.

“He looked for this a long time ago, I dreamed it. It was a unique moment because of how it happened, where it happened, after so much waiting, the truth was there was no better way for it to be ”, he recalled.

Messi, who on Brazilian soil lifted the first trophy of his career with the senior team after four lost finals, needed just a few minutes to warm up on a cold night in front of some 20,000 fans – in which it was the first game with an audience in a Argentine court after almost 20 months of pandemic.

After recovering the ball in the rival field, the star threw a pipe at defender Luis Hanquín and aimed his left foot against the goal of Carlos Lampe, who resigned himself to the Argentine’s angle shot at 14 minutes.

The now figure of the Paris Saint-Germain shouted the second in the 64th minute after playing the wall with Lautaro Martínez. Messi left defender Jairo Quinteros on the floor and signed the work with his right hand.

At the end of the game, La Pulga took advantage of a rebound and closed his dream night. It was his seventh triplet with Argentina.

“Messi is leaving a legacy to all the players in the national team. I am proud to have him as a player ”, praised Scaloni.

Since his retirement in 1977, Pelé held the record with 77 points.

Argentina has 18 points in the standings and remains the only guard for the leader Brazil (24), who beat Peru 2-0. Bolivia, which has accumulated 60 games without a win as a visitor by qualifying, the worst streak among the ten South American teams, remains penultimate with six.

After the 3-1 victory on the road against Venezuela at the start of the triple matchday in September, the Albiceleste had traveled to Brazil for the South American classic, but barely seven minutes were played due to the entry into the field of health agents to withdraw three Argentine players who were supposed to be in quarantine.

The match was suspended by the referee and now FIFA must decide whether to resume it or establish a winner. There is no time limit for the ruling.

The inconveniences for Argentina continued back to Buenos Aires, where Scaloni disaffected goalkeeper Emiliano Martínez, defender Cristian Romero and creative midfielder Giovanni Lo Celso, regular starters, at the request of his clubs Aston Villa and Tottenham in the English league.

After the bad drink, Messi and his teammates had a championship reception in the first meeting with the public in Argentina since March 2020. The occasion also served to share the Copa América with the fans.

After the final whistle, a Messi made the Olympic lap with his teammates and the trophy in his hands.

That tournament meant for Argentina to get rid of a 28-year-old load without titles. And without that weight, the team’s game flows with more constancy, especially when Messi is associated with Rodrigo De Paul in the generation and with Ángel Di María in the definition zone.

In October, Argentina will visit Paraguay. Then they will play at home against Uruguay and Peru on a date that could define their qualification for the World Cup.

Bolivia will visit Ecuador and then host Peru and Paraguay in La Paz. It will be seen if the Venezuelan coach César Farías is still on the bench by then.