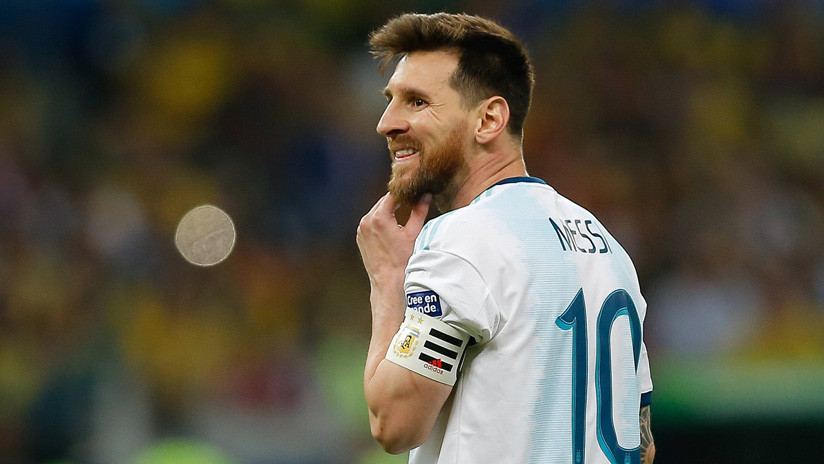 Lionel Messi, who has just won his sixth Golden Boot for being the top scorer in Europe, granted a radio report to the Argentine program 'Perros de la Calle' and criticized the apparent arrogance of many compatriots: "One of the biggest mistakes of we are to believe ourselves the best of all. And the truth is that in many things we are very far away, "said the Barcelona striker.

In turn, Messi related how it was to leave his hometown, Rosario (Argentina), to move to Spain with only 13 years: "I had to fight, I had to leave my country, my people and my friends. Come to Barcelona was something unthinkable. I burned stages very quickly, and that made me always want to fulfill my dream. " However, he said Rosarino is still considered despite the distance. "We always had our feet on the ground. The little time we have we try to travel there," said the South American crack.

In addition, he was very grateful for the support he had in the quarry of the Spanish club during its beginnings: "The education they gave me and the values ​​they taught me as a boy made me follow a line," he recalled.

Thus, one of the most awarded and recognized athletes in history, also dedicated comments to the frustrations that he had to overcome throughout his career: "In the middle there were many disappointments, which helped me overcome myself and grow as a footballer."

The difficulty of living again in Argentina

While it is true that Lionel and his family travel to the Latin American country in December to spend the holidays, and in the middle of the year – when their children are on vacation – to take advantage of the school break, "there comes a point that Thiago (the eldest son) misses to his friends and day to day "in Spain.

"I was losing a little those friendships, which is something that I value. I want them to enjoy it. I believe a lot in friendship. Those that one has since age three are those that last in time," said the idol of the Argentine national team

Flattery for Ronaldo, Neymar and Riquelme

For many years there was talk of the supposed rivalry between Messi and Cristiano Ronaldo, the acclaimed Portuguese midfielder. In fact, on more than one occasion the recognition of the best soccer player in the world was disputed. And when Ronaldo wore the Real Madrid shirt – today he plays in Juventus, Italy -, the duel between these two referents stood out in every Spanish soccer classic. About this, the interviewee did not hesitate to highlight the added "value" that his colleague gave the tournament: "With him he was good, he made the games much more special and the League as well."

As for the Brazilian Neymar da Silva Santos Júnior, who knew how to be his partner in Barcelona but today he works at the PSG in France, he said: "It is complicated his subject. It is difficult for him to get out of there and come back, for how he left Many members and people of the club do not want me to come back, "said the Argentine. Although he clarified: "For the sport, we could use barbaric. It is one of the best in the world, but the other part is understandable." Also, Messi said that he talks often with him, and that they still have a WhatsApp group shared with Luis Suárez, the Uruguayan striker of 'Barça'.

Finally, he spoke of Juan Román Riquelme, idol of Boca, who also knew how to wear the shirt of the Barça team. Both maintain a good relationship, and shared matches in the national team, although 'JR' already left the courts. In fact, he still didn't have his big farewell match, but preparations for his great tribute have already begun. Will Messi go? "I talk a lot with Riquelme, when we can. He called me for his farewell, and if the dates coincide, delighted. But I don't know if I will be there," said the star. In turn, he also spared no praise: "He deserves a great farewell, for everything he gave football and Boca."