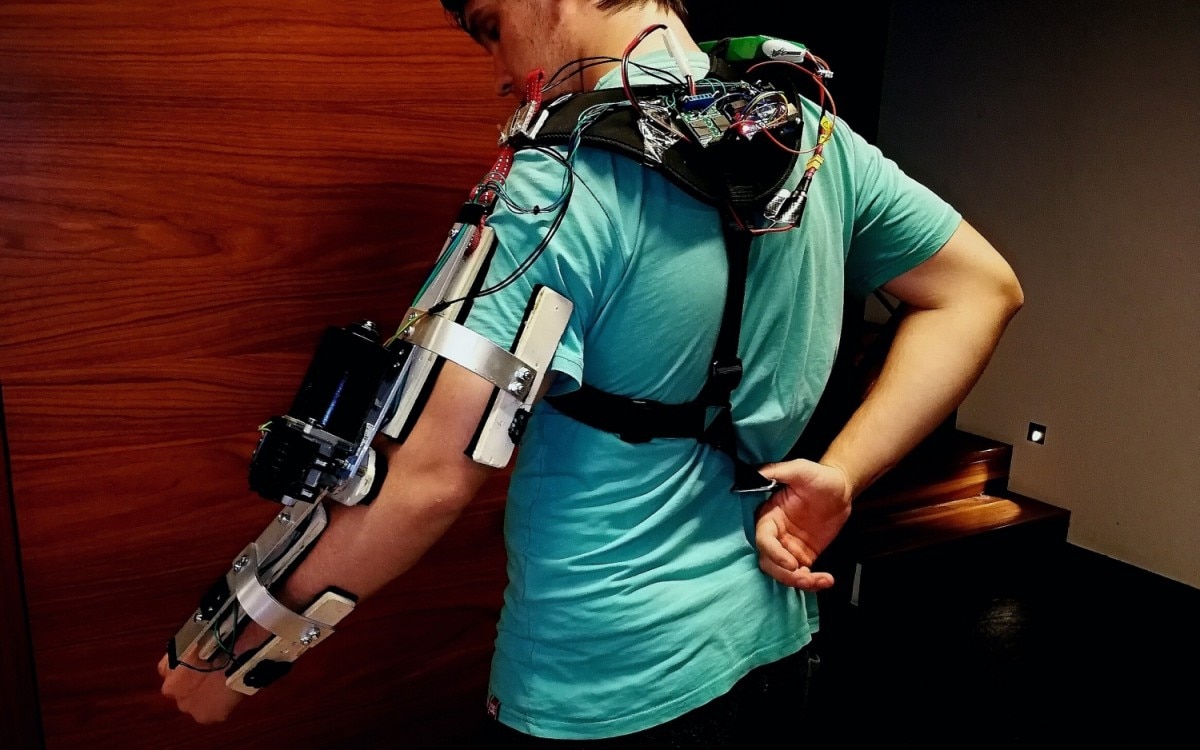 Mexican students designed an exoskeleton that is driven by an engine that runs an electronic card, with the aim of helping people who lost mobility in their arms.

The prosthesis, which simulates the movement of flexionnsion of the elbow, is made of aluminum in its bases and nylon-carbon in the parts that adapt to the arm so as not to hurt the patient, the University of the Valley of Mexico (UVM) reported on Wednesday, private institution, in a statement.

Mechatronics engineering students, Diego Antonio Acosta and Eduardo Garza, explained that their design "can be used as an assistant in bending and elbow extension movements in rehabilitation based on the Kabat method", a neuromuscular facilitation technique.

The Kabat method focuses on two movements: the flexwest and hand movement to overcome the exoskeleton.

With this, they explained, "it helps the neurons continue to function and re-form connections with the arm, with the central nervous system and the memory of the arm, elbow and movement is recovered."

Both noted that their invention would particularly help those patients who, after a stroke, suffer the immobility of the arms due to the death of neurons, either by bleeding or an ischemic case (when blood flow stops at a part of the brain for a short period of time).

Thus, instead of the physiotherapist moving the patient's arm, the exoskeleton will do so automatically and will help the specialist see how the muscle behaves whether it improves or worsens.

They said that with this tool, they seek to reproduce the exercises that super physiotherapists use for patients to recover movement.

“When there is a Vascular Brain Accident (CVA), there is a stage called a therapeutic window that lasts a year, it is when the patient has the possibility of recovering their movement, either in 90 or up to 100%,” they commented.

The students explained that the surviving neurons can replace some of the lost functions and this will be mediated by the sensory-motor system.

Stroke is part of cardiovascular diseases, which are a set of disorders of the heart and blood vessels.

In the world, more than 32 million people annually suffer a heart attack or stroke with high cholesterol being the biggest risk factor for this situation.

There are thousands and thousands of people who suffer from some type of motor disability. Therefore, for years, scientists from all over the world have given themselves the task of creating mechanisms that help these people make their lives more bearable.

With the invention of exoskeletons, patients have the ability to move more freely, thus allowing them a fuller life.

On October 4 a new breakthrough was announced in this area. French researchers made a young quadriplegic walk again thanks to an exoskeleton that was connected to his brain.

The prototype, the result of ten years of research of several teams, works with electrodes implanted in the skull that “capture the signals sent by the brain and translate them into motor signals,” Alim-Louis Benabid, professor emeritus, told AFP. from the Grenoble Alpes University.

In the United States, for years the National Institute of Health has devised exoskeletons for children. It is a robotic device designed for infants with cerebral palsy, specifically for those who suffer a complication that prevents them from using their knees normally. The exoskeleton allows them to walk without the need for crutches or a walker.