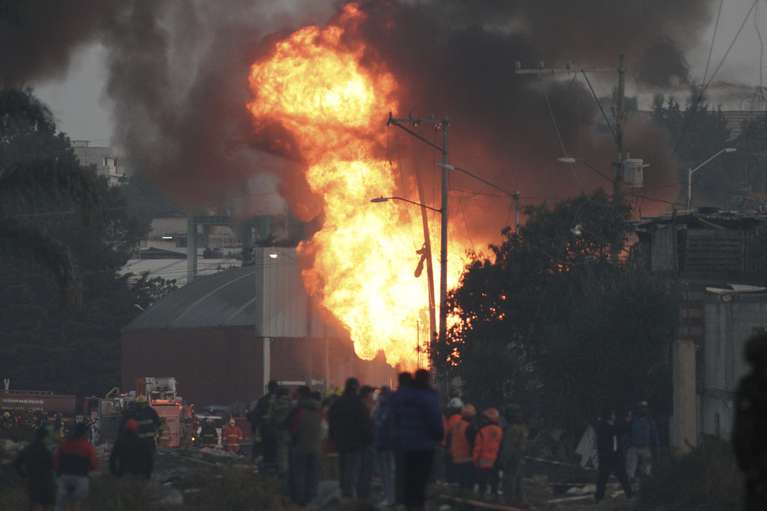 PUEBLA, Mexico (AP) – Three consecutive explosions caused by a gas leak in a clandestine intake of a gas pipeline left at least one dead early Sunday, 11 people injured, four of them minors, and fifty houses collapsed. or heavily damaged in a neighborhood north of the city of Puebla, in central Mexico.

The governor of Puebla, Miguel Barbosa, accompanied by civil, military and Petróleos Mexicanos authorities, explained at a press conference that a major tragedy was avoided thanks to an emergency call prior to the explosions, warning of a white cloud and the smell of gas , which allowed the evacuation of 2,000 people in a radius of one kilometer.

The leak was so great that in some parts the houses were turned into rubble, and more than twelve hours later there were still flames at the site of the clandestine seizure, which ceased once a heavy rain began.

However, the neighbors were a bit calmer after the scary hours of the night before.

“When I heard the scandal, the shouting of the people, that’s where we realized that the gas smoke was coming (…) and we no longer had time to get documentation or animals or anything,” said a neighbor who He did not want to give his name but spoke on AP cameras shortly after he was informed that his home was completely destroyed.

Of the eleven hospitalized, some with burns up to 75% of the body, three were intubated and another two in serious condition. The authorities did not specify the situation of the minors, between 3 and 16 years old.

Rescue work began in the morning with canine pairs in case there could be people in the rubble, although Barbosa indicated that there are no reports of missing persons. The official added that, according to a preliminary balance, there are 54 houses collapsed or with very serious damage.

On Sunday morning there were already in San Pablo Xochimehuacán a total of 1,400 troops, including the military, the National Guard, police and municipal and state firefighters, and even emergency personnel from the neighboring state of Tlaxcala.

General Alfredo González said that, in addition, another 870 soldiers were on their way from the Valley of Mexico with all kinds of tools, machinery and excavators and four canine pairs.

The explosion took place in San Pablo Xochimehuacán, a neighborhood north of the city of Puebla, shortly before three in the morning.

The first report of the gas cloud was received at 1:34 a.m. and the authorities began the evacuation almost immediately, first within a radius of 300 meters until reaching one kilometer. The first of the three explosions was almost 80 minutes later.

Even 37 patients had to be evacuated preventively for a few hours from a nearby trauma hospital, which resumed normal operations shortly thereafter.

The images disseminated on social networks showed large flames and explosions are heard, which spread panic in the area. But Javier González, from Petróleos Mexicanos, insisted Sunday morning that the risk was “completely controlled.”

Civil Protection of the city tweeted shortly before 7 in the afternoon that, in coordinated work with other bodies, members of Pemex “have closed the valve and controlled the leak.”

From the morning, the authorities asked the inhabitants not to approach the area.

“They cannot return for the moment,” said Eduardo Rivera, mayor of Puebla. “The risks of collapses, cables, can be the cause of a serious accident.”

According to preliminary data, the origin of the leak was in a private property from where gas was being stolen. In front of that place there is a gas company.

At the site of the clandestine intake there was a tanker and 25 gas cylinders weighing 20 kilos each, which the criminals were probably carrying, González explained. The gas cloud expanded at ground level and when finding hot spots, explosions arose.

That could be the explanation that the place of the escape was about half a kilometer from the area with the most destroyed homes, according to the map released by the city’s civil protection.

In Mexico, theft of hydrocarbons, especially oil, has proliferated and Puebla is one of the most affected states, since it is located between the capital and the oil region of the Gulf of Mexico.

Criminals drill the pipelines despite the risks that this causes. One of the most serious events was in January 2019 in Tlahuelilpan, north of Mexico City, where more than 130 people died, many of whom were affected because after detecting the fuel leak they went to fill gasoline jugs and were trapped in the fire.

The governor of Puebla promised to compensate the victims, rebuild the houses and thoroughly investigate what happened. According to him, the first implicated are in sight: the owners of the place where the intake was and of the tanker, as well as their partners. He also said that the gas company across the street would be investigated.

“This fact will not go unpunished, we will go to depth,” he said.

He recalled that it is very serious that there are two pipelines that pass through Puebla because, although they were built outside the urban area, the city grew and houses were built on them. In fact, one of the affected areas is next to a street called Gasoducto.

The government of President Andrés Manuel López Obrador, who offered his condolences via Twitter, made the fight against the millionaire business of fuel theft one of its great commitments and deployed thousands of military personnel to guard the pipelines. In Puebla there had been constant patrols for six months, General González said Sunday.

But although the clandestine seizures have been reduced in this government, the problem is not solved.

According to an official report in March, Mexico lost an average of 4,000 barrels per day of gasoline and diesel due to illegal intakes, but the president said that the thefts, supported by the inhabitants of entire towns, were already very few.